The Dancer is a pretty basic support class, as it has access to mostly buffs in its skillset. The Dancer is the main class of Primrose and the secondary job shrine can be found in Northern Wellspring Sands. Lion Dance will buff the physical attack of a character, while Peacock Strut, Mole Dance and Panther Dance buff elemental attack, physical defense and speed, respectively. The Dancer also has access to dark-elemental attacks, both a single-target one and all enemies one, similar to the Cleric’s light attacks. That brings up the last normal skill, Bewildering Grace, which is a bit different when compared to the others.

Bewildering Grace, when used, will cause a random effect to happen, which can be good or bad. The amount of BP you use will make the dance trigger that amount of times, and there seem to be some effects that can only happen once it’s boosted. Some of these effects include increased JP or EXP, having the dance reduce the party’s HP to 1, losing all SP or BP, having your party be poisoned, summoning a monster that does major damage to the enemy, and much more. Note that it’s possible to get screwed with a fully boost Bewildering Grace, with it possibly reducing the party’s HP to 1, then following up that with a small damage to the whole party. 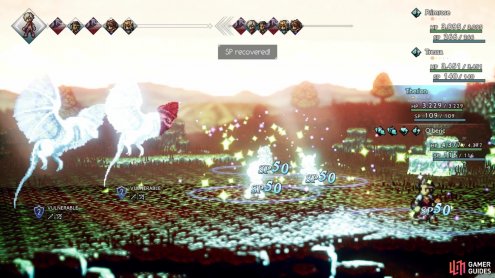 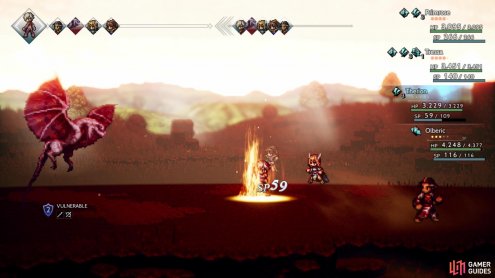 The biggest takeaway from a fully boosted Bewildering Grace is you can get a JP/EXP x100 from it, although it is a very low chance. The Dancer’s Divine Skill, Sealticge’s Seduction, is another great one, which allows any skill that usually targets a single target to hit all enemies/characters. As with some other Divine Skill buffs, this doesn’t work on other Divine Skills, but you could do something like use it in conjunction with Lion Dance or Peacock Strut, as an example. The Dancer, as a secondary job, gains the following stat bonuses: Elemental Attack, Evasion and Speed.

The Dancer’s passive skills are a mixed bag, with two of them being very good and the other two having some uses, but might not be considered as good. The Show Goes On makes it so any buffs the character with this equipped will persist for an additional turn. Eye for an Eye will give that character a 50% chance to counterattack when hit with a physical attack. Probably the best passive from the Dancer is Second Wind, as it recovers a percentage of your SP per turn. This is great for just about anyone, especially if they’re using SP skills a lot. The last passive, Encore, allows the character to recover with 25% HP once per battle when they are incapacitated, which can prove useful in some battles, but it’s not needed too much.