The Hunter is a damage dealing class that has some skills that are essential for a lot of battles. The Hunter is the primary job for H'aanit and the secondary job shrine is located in East Victors Hollow Trail. Despite using an axe and bow, the majority of their skills focus on the latter. Rain of Arrows is a multi-hit attack that hits random enemies five to eight times. The problem with this attack is that you will see a lot of hits miss. This isn't affected by accuracy and is built into the actual attack, although you seem to be guaranteed at least three hits every time. True Strike is a single hit bow attack on a single enemy, but it's nice because it's a critical hit.

Thunderbird is nothing too special, as it deals lightning damage to an enemy, but there are better options for dealing lightning damage. By far, the best skill in the Hunter's list is Leghold Trap. What this skill does is delay the enemy's actions until the end of the turn, essentially making it so all of your characters can act before them. Note that on the turn after a break, the enemy will always get the first action no matter if they have this debuff on them or not. You should always have a Hunter in your party that has this skill, though, as it's invaluable during boss fights. 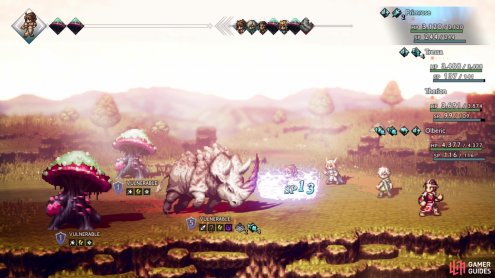 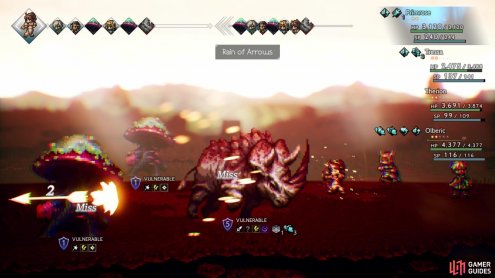 Mercy Strike is a special type of skill that can leave an enemy with a single HP remaining, which is great for someone like H'aanit, as it makes it ideal for her Capture mechanic. Arrowstorm is kind of like a target-all version of Rain of Arrows, with the same hit-or-miss idea behind it, although it does cost a hefty amount of SP. Take Aim is a fantastic buff that increases the critical rate and accuracy for the entire party, so you don't have to worry about using something like the Dancer's Divine Skill to make it hit everyone. The Hunter's Divine Skill, Draefendi's Rage, is a very strong bow attack that hits all enemies, so there isn't much to talk about there.

As for the passive skills, the Hunter does have some great ones that come in handy during the game. Heighten Senses gives you an increased chance of attacking first in battle and this seems to extend to the entire party. This is a great skill to have, simply because you will want to have someone go before enemies and bosses. Eagle Eye is the second passive for the Hunter and probably its worst one, simply because there are better options out there for your limited slots. Second Serving makes a character have a 50% chance of delivering another melee attack after using the basic attack. Note that it's only one additional attack, even if you fully boost the normal attack to strike four times.

The last passive skill, Patience, for the Hunter is arguably the best one. The equipped character will have a 25% chance to gain another action at the end of a turn, after everyone else, foe and friend, is finished. This has a lot of uses, one example being to use it in conjunction with something like Leghold Trap. After the enemy does their actions at the end of a turn, you may need to heal extra or something, making a procced Patience a good thing. Another scenario involves hitting a boss' weakness and it only having one shield remaining at the end of a turn. Patience procs and you have a chance to break them.