As a support class, the Merchant really shines and has a few unique skills of its own. The Merchant is the main job of Tressa and the secondary job shrine is located in Moonstruck Coast. Collect is basically like a steal command, but for obtaining money from enemies. This can be one of the more important abilities towards the beginning of the game, since money is tight. Note that the percentage for Collect is determined by the current HP of the enemy, with boosting helping out by increasing your chance. Tradewinds is a single-target wind elemental spell, and Trade Tempest is the all-foes version.

Rest is a self-target only skill that cures ailments, as well as restores HP and SP. The HP healed is not static and depends on your own, while the base SP healed is always 25; each point of boost applied to it heals 25 more SP, up to a maximum of 100 at max boost. Donate BP sounds just like the name suggests, with this skill donating the BP of the user to the recipient, with more being added with boost. Sidestep, which is self-only, allows the user to dodge a single physical attack with 100% success. With a later advanced class’ ability, this can be extended to the entire party. 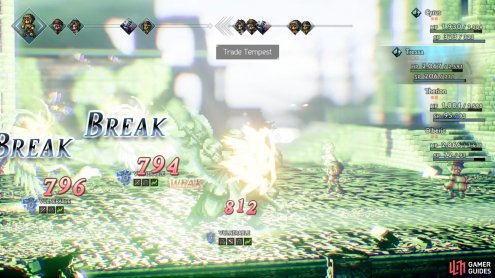 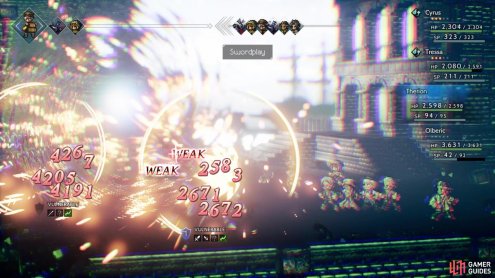 Hired Help is a bit more involved, since it involves you using your own money to summon help, and there are five options in total. The cheapest one (150 Leaves), Mercenaries, will summon some helpers who do a low-damage sword attack to the entire enemy group. The catch, though, is that the Mercenaries will buff your party’s physical defense for two turns. The second option, the Bandit (800 Leaves), will unleash an axe attack on all foes. Dancer (2,500 Leaves) does a dagger attack on all foes, as well as inflict status ailments. Cleric (10,000) does light-elemental damage and Veteran Soldier (30,000 Leaves) does a powerful sword attack on all foes.

Bifelgan’s Bounty, the Merchant’s Divine Skill, will hit a single enemy for massive enemy, with you gaining money equal to the damage you did. There are two things to consider with this Divine Skill. Should it be the killing blow, then you will only receive money equal to the enemy’s remaining HP. Secondly, the in-game description lists it as a non-elemental attack, but it is really elemental. With it only targeting a single character, you can find something much better to waste your BP on than this skill.

With the exception of one passive skill, the others are a mixed bag and will lose their effectiveness as you progress in the game. Endless Items makes it so whenever a character with this uses an item, there is a 25% chance the item will not be consumed. Grows on Trees just gives you extra money after completing a battle. For Hang Touch, any attack that knocks you to below zero HP when you’re not near death will leave you at 1 HP. By far, the best passive for the Merchant is the final one, SP Saver. which halves the SP consumption of skills for the equipped character. You should have this on almost everyone towards the end of the game, but it’s definitely very important on Scholars and the like.