The Scholar is your elemental job class in the game, with access to three of the basic elements. The Scholar is the main job of Cyrus and you will find the secondary job shrine in Western Noblecourt Flats. All of their skills target all enemies, so you don't have to worry about having to change between a single target or not. Fireball hits once, while Fire Storm will hit all enemies twice. Icewind and Blizzard are the ice-elemental version, and Lightning Bolt/Lightning Blast are the lightning versions. The only other normal skill available to the Scholar is Analyze, allowing you to get a quick glimpse (it flashes pretty quickly) at their current HP and it also reveals one of their weaknesses. Note that using BP to boost Analyze will reveal more weaknesses, up to four at max boost. 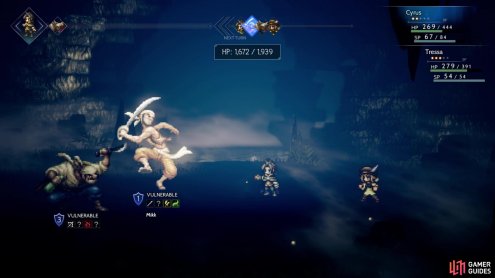 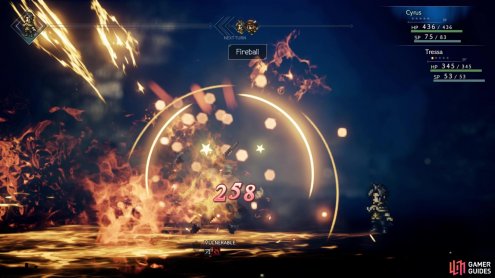 The Scholar's Divine Skill, Alephan's Enlightenment, will make it so that the target of it will have any multi-target skills instead target a single enemy, but with more power (twice the power, to be precise). Looking at the passive skills for the Scholar, the first one, Evasive Maneuvers, is a good one to use if you feel the encounter rate is too high. Elemental Augmentation increases your elemental attack by 50 and it's a good choice for anyone who uses spells, although you might want to use something else later in the game. Precipience prevents your party from being surprised by foes, which is a great thing to have so enemies don't get a full turn before yours. Vim and Vigor, the last passive, will regenerate HP each turn.