The Thief is a bit of a weird class, when you compare it to the others, as it doesn’t have a straight role. If it could be classified as anything, it’s a cross between a debuffer and a lone wolf. It is the main class of Therion and the secondary job shrine can be found in South Quarrycrest Pass. Steal advertises what it does in the name; this skill will steal a single item from a foe. Enemies in this game only have one item, typically the same one as what they drop, so Steal will nab that from them. Wildfire is a single-target fire-elemental attack and is nothing special. HP Thief is one of the better attack skills for the Thief, as it is a two-hit dagger attack that will replenish the user’s HP equal to half of the damage dealt.

The next two skills, Shackle Foe and Armor Corrosive, are vital to any party. The former will reduce a single enemy’s physical strength for two turns, while the latter reduces an enemy’s physical defense for two turns. Steal SP, depending on the enemy’s weaknesses and the secondary job you have equipped, will most likely replace that character’s regular attack because it typically recovers the SP used. Share SP takes 50% of your current SP and gives it to the character of your choice, making it a great pairing with Steal SP and excellent when you have SP-heavy users in your party. The Divine Skill, Aeber’s Reckoning, deals damage to all enemies based on your character’s speed. 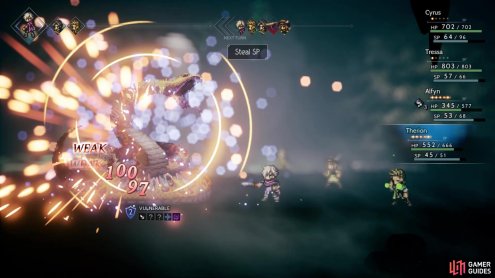 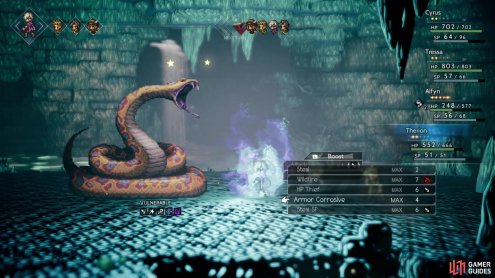 The passive skills for the Thief are not as good in the long term, as with other jobs. Incidental Attack has it so whenever you use a non-damaging move (like Steal), you have a 50% chance to attacking with your current weapon. Fleetfoot just increases your character’s Speed stat by 50, which is great if you plan on using the Divine Skill. Probably the best passive is Snatch, which allows you to double the loot you gain when using Steal or Collect in battle. Insult to Injury, the final passive, will extend all debuffs put on foes an additional turn.