Incite is a taunt and will make the enemies more prone to attack you, but this can be a bad thing if you’re up against a powerful foe. Cross Strike is a powerful physical attack that only hits a single foe, but this will most likely be your go-to skill when facing a boss with a Warrior in your party, especially when you max boost it (at least, prior to obtaining the Divine Skill). Thousand Spears is similar to the Hunter’s Rain of Arrows/Arrowstorm, as the accuracy doesn’t affect whether the hits connect and you will always get three hits from it. The Divine Skill, Brand’s Thunder, is just a massive physical attack against a single foe. 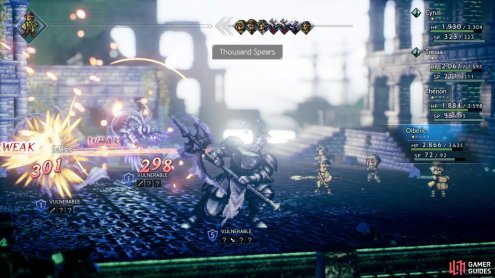 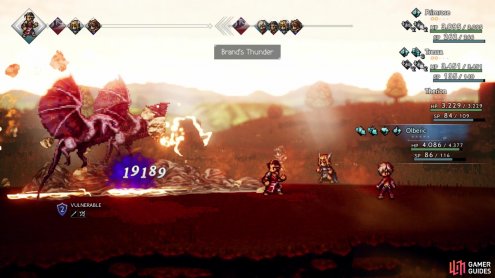 Covering the passive skills, the Warrior has one that will likely become important during Chapter 3 and going into Chapter 4/beyond. Cover is your basic skill that lets the user absorb single-targeted damage from enemies whenever their allies are low on health. Summon Strength simply adds 50 physical strength to the character, which is good when you’re using physical attacks. Endure is an odd one, as it simply gives you the physical/elemental defense buffs whenever that character is afflicted with the listed ailments. The last passive, Surpassing Power, allows you to break the normal 9,999 damage limit, which will become 99,999 with this equipped. You will want this on any characters that might be approaching the normal damage limit.