While you can begin this Side Story after completing the first chapter of Ophilia's story, it's best to wait until a little later, as you will have to venture inside of a Danger Level 25 dungeon. Begin by speaking with the Diligent Student inside of the tavern, who believes that the jotunn is real. Next, you'll need to Inquire/Scrutinize the Muttering Codger for the Where the Ice Giant Sleeps information; he's at the base of the hill that was used during Ophilia's first chapter. Once you do this, you will need to journey to Hoarfrost Grotto, which is located in Western Flamesgrace Wilds. If you've already uncovered this, it seems like going there from S'warkii might be shorter, so just follow the trail, going east in North S'warkii Trail to Western Flamesgrace Wilds and finding the cave just northeast of the save point. Step into the opening north of the save point and you'll come face to face with the Jotunn.

Depending on when you come here, this boss could prove a little challenge or it might be quite easy. At the beginning of the battle, the Jotunn is alone and only has four shields. On its first turn, it will summon two Snow Elementals, which are different from the elementals you have seen inside of the Grotto. They are weak to daggers, staves, fire and light, only have four shields and around 8,000 HP. They can use Icicle to target a single character, as well as Icewind to hit your party with an ice-elemental spell. 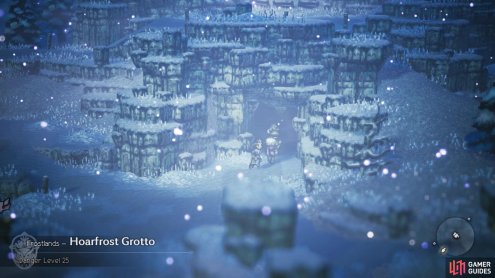 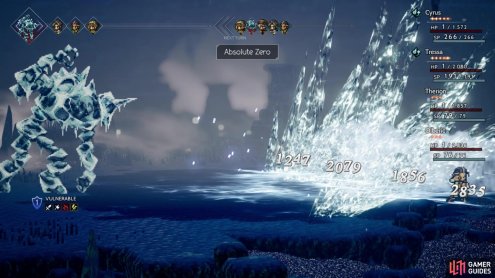 As for the Jotunn, it can use Freeze to target a single party member and Big Freeze to hit them all. The Jotunn is weak to swords, axes, fire and lightning, and upon breaking it, the boss will recover and gain two additional shields. It can only do this twice, so the most shields it will ever have at once is 8. Once the boss reaches half health, it will signify its ultimate move with the message that a chill is in the air (followed by the familiar dark aura). It will use Absolute Zero on its next turn, which will reduce everyone's HP to 1. You want to make sure that you either have someone who can heal (even with a Healing Grape Bunch) or you can break it before the Jotunn manages to perform the skill.

At this point, the Jotunn shouldn't give you much trouble at all and will go down with ease. For winning the battle, you will receive the Jotunn Horn, which is a key item. Return to Flamesgrace and hand over the horn to the Diligent Student to finish the quest.