Shadow Over the Sands

A soldier in Wellspring says that one of their scouts reported seeing a huge serpent lately, out in the Quicksand Caves. No one believed him, so he set off for the caves. Exit the town to Northern Wellspring Sands and you should see a soldier just north of the save point. Use Inquire/Scrutinize on him to get the The Giant Serpent's Master information, then start making your way to the Quicksand Caves. It is located to the northeast, but you'll have to head around to the north and make a U-turn back to the south to find the entrance.

Once inside, make your way to the end, where you will see a man standing there. Make sure you are prepared, as talking with him will begin a challenging boss fight. It might be best to wait until completing Chapter 3, as this boss fight is extremely tough, plus you will most of your equipment sorted out. If you have any accessories that prevent Sleep, then equip them, as you will need them. When the battle begins, you see that you are up against two foes. The more dangerous of the two is the Giant Python, as its damage is high and its first move will be Soporific Breath, an attack that has a chance to inflict Sleep on your entire party.

It also almost has twice the HP as the Snake Charmer and should you defeat the Snake Charmer first, then the Python will grow stronger, which you don't want. Aside from Soporific Breath, the Python can also do Sweep, causing big damage to the entire party. Its normal attack is nothing to scoff at and Soporific Fang only hits a single character. The Snake Charmer's fairly strong, as evidenced by his normal attack dealing fairly high damage, but he spends a lot of turns buffing the Python. "Now is your time to shine" will grant the Python two actions on the next turn, "Go get them" will buff its physical attack, and "Keep me safe" will increase its shields and protect two of its weaknesses. 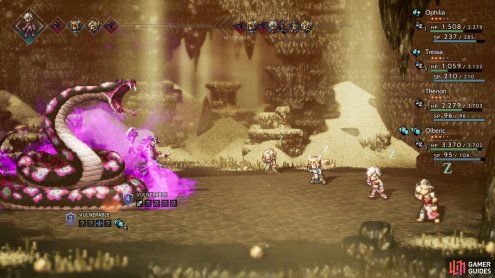 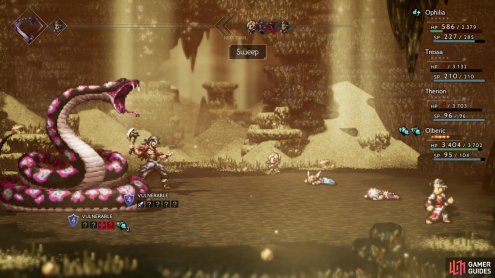 From the above, you might think getting rid of the Charmer is the ideal strategy, but as previously said, it gets stronger by gaining three actions per turn, which is something you don't want. The attack that the Charmer gains from the Python being defeated first is much more manageable. Thus, the key to winning this battle lies in getting rid of the Python as quickly as possible. On your first turn, you want to whittle its shields down as close to the Break point, or even Breaking it. Once you do that, it's time to put the following plan in motion.

The Giant Python is weak to spears, axes, ice and light, while the Snake Charmer is weak to swords, bows, staves, lightning and wind. After breaking the Python, you want to start working on the Break for the Charmer. The key strategy here is to alternate it so that while the Charmer is active, the Python is broken, and vice versa. This plan makes things a lot more manageable, especially since you should hopefully not have to deal with too many attacks from either. However, don't neglect the damage on the Python, as it has about twice as much as the Charmer and you don't want to defeat the Charmer first.

Note that the Charmer will begin using Rampage when left alone, but he only gets a single action per turn and while the damage can be high from Rampage, it's a lot easier to heal it. You can alleviate the damage done to you by buffing your physical defense with the Merchant's Hired Help skill (the Mercenaries option) and using the Thief's Shackle Foe. Upon defeating both foes, there will be some more dialog after the battle, then it will finish inside of the cave.