You could get this Side Story as soon as Chapter 2, when you first visit Victors Hollow, but it requires you to make a trek through a Danger Level 48 dungeon and fight a boss that is clearly too strong for said dungeon. When you're ready, you'll find the NPC who gives this quest south of the inn in Victors Hollow, who mentions that his daughter has gone missing. Head to the northern section of town to find the exit to the Forest of No Return in the southwest corner. Go ahead and enter the forest.

Step into the clearing and get ready for the boss, Devourer of Men. The boss will be accompanied by two Deadly Spores, who live up to their name. Their normal attack can hurt quite a bit, plus Charge hits a lot harder. Their most annoying attack is Exploding Spore, which damages the entire party and has a chance to inflict Confusion. They can also use Drink Lifeblood to deal major damage, with them being healed by the same amount. They are quite meaty, having seven shields and close to 38,000 HP. They are weak to swords, spears, axes, and wind and should be taken out first, before worrying about the Devourer of Men.

However, the boss will continue to annoy you throughout the fight, especially whenever it uses Spirit Away to remove a character from battle. It can Spirit Away more than one person, if you give it enough time to do so. To get them back, all you have to do is break the boss, with its first weakness set consisting of spears, daggers, staves, and fire. Upon recovering from the break, it will gain more shields and change weaknesses to axes, bows, and wind. The third weakness set is just swords and light, with the boss having a total of eleven shields. 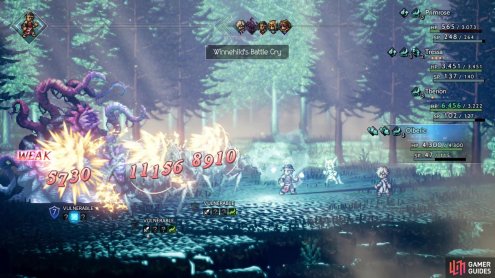 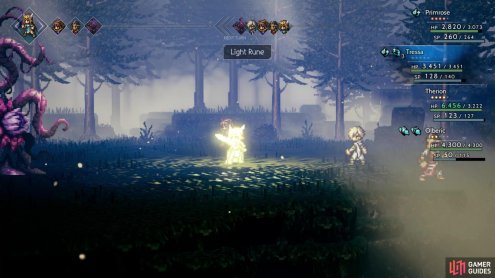 As for moves, the boss can also use Charge, dealing about the same damage as the Spores, if not a little more. Black Magic will hit all allies with dark-elemental damage, plus it has a chance to inflict Blindness. At 50% HP, the boss can resummon the Deadly Spores, with full health and shields, but it can only do this once. Any attempt to resummon them later will result in a failure. It will also upgrade Black Magic to Shadow Magic, which hits twice. Lastly, it can enter boost mode, with the following turn producing Devour. This instantly kills a single character and the boss will recover HP equal to what the character had before they died.

There isn't much in the way of attacks from the boss, but what it and its minions have hurt a lot. Outside of Black/Shadow Magic and Exploding Spore (has no element), set up defenses by boosting your physical defense. Hopefully, you've gotten the extra jobs, as the Sorcerer helps cut down the shields with Ventus Saltare and Lux Congerere, with the latter being during the last set of weaknesses. You are free to apply Shackle Foe on the enemies, but keeping that on all three is cumbersome, so resort to only the boss.

If you have Tressa as your Runelord (and you should), using Transfer Rune on herself and then applying an elemental rune will help quicken the fight. Plus, on turns when she is waiting to do something, she can perform Rest on the party, getting rid of any ailments and recovering SP. The biggest hurdle to this battle is getting rid of the Deadly Spores twice and while the Devourer of Men is strong, it's not a tough battle when it's alone. Having only a single action per turn definitely helps with that.

Once you defeat the boss, you will see Ellie there. Using Primrose or Ophilia, Guide/Allure her back to town (can just teleport), then talk to her father with her behind you to finish the quest.