As you're wandering the fields and dungeons, you will come across random encounters, leading you into battles. Battles are turn-based affairs, where you simply need to reduce the enemies' HP to zero to win. Every single foe in the game has a series of weaknesses, shown as squares underneath their sprite. When you first encounter a new enemy, the weaknesses will be shown as question marks, unless you have Cyrus on your active party. That's because Cyrus' talent, Study Foe, allows him to reveal a single uncovered weakness of all enemies at the beginning of a battle. 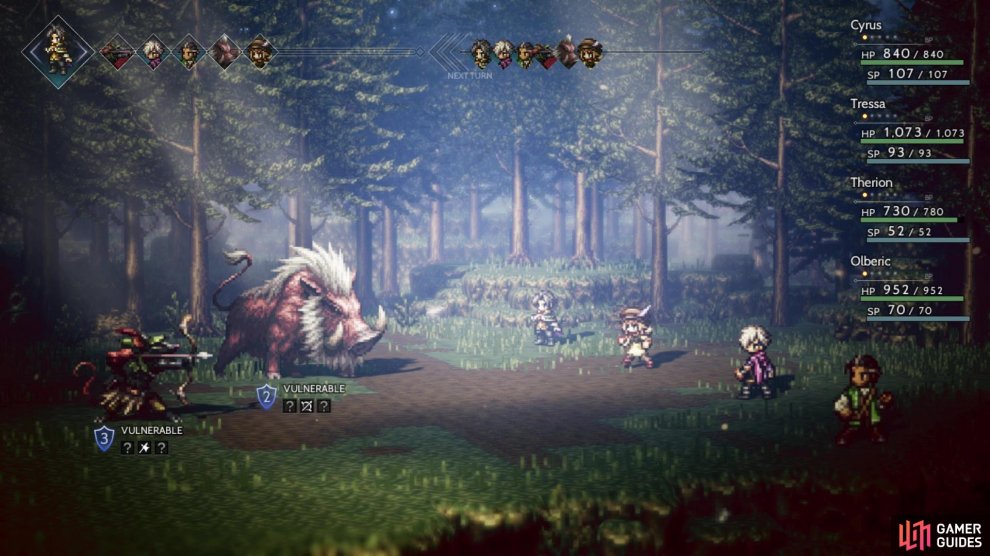 At the top of the screen will be the turn order for battle, which is loosely based on the characters/enemies' Speed attribute. There are a few exceptions, mostly related to some actions and one of the core game mechanics, but the turn order is decided upon whenever you see it pop up on your screen, with you seeing the current turn and the next one. Every character in battle will have the same commands, which are Attack, Abilities, Item, Defend and Flee. Attack will use their currently equipped weapon to deal damage with a physical attack and you can switch weapons by using left/right on the directional pad.

Abilities allows the character to use any skills they learned from their main or secondary job class, while Item allows them to use any items in your inventory. Defend will make the character guard on their current turn, reducing the damage they receive, plus it also moves their action in the next turn to the front, with two exceptions taking priority. Lastly, Flee makes a check to have the entire party run from battle. Note that some battles cannot be flee'd from, which has the command greyed out. Also, if you flee with your first character during a turn and fail, then the rest of your characters' actions during that turn will be forfeited.

Next to the weaknesses will be a number in a shield icon. These are the enemies' Shield Points (referred to as Shields hereafter), representing the point at which they will be broken. When an enemy is broken, they will be completely stunned for an entire turn, letting you pile on the damage for that turn, but on the subsequent one, they will always get the first action, no matter what. Also, enemies will become weak to all forms of damage, no matter what, plus they double damage from all types. Starting with Chapter 2, bosses will typically have some sort of mechanic that ties into the Break one, whether they gain more shields or something else. 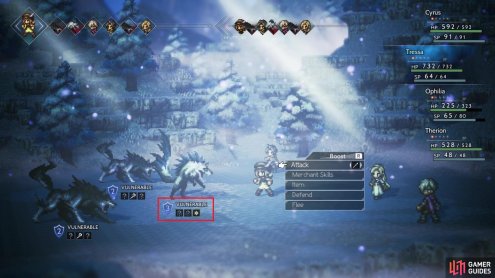 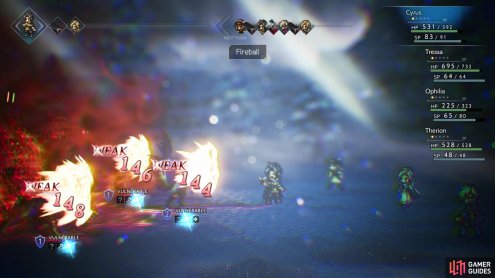 You've got the basics of combat down, but there are a few more in-depth systems in play. One of these is the Boost option, which allows you to strength your attacks and even help with breaking shields. In the upper right corner of the screen, underneath the character names, you should see five dots. These dots represent your Boost Points (BP), with the actual amount corresponding to those that are orange. Your characters get a single BP at the beginning of every turn, unless they used them on the previous turn, in which case, they do not get any at all.

By pressing the R button when it's that character turn, you will be able to use your BP. You can only use up to three BP at once, although you can store up to five. Note that you can decrease the BP used by pressing the L button, should you change your mind. The extra effects of Boost depends on the action taken, such as your normal, basic attacks having extra hits for each BP used. Offensive skills, the ones that do damage, have their power increased. Buffs and debuffs will have extra turns tacked on to their durations, while other utility skills will have their efficiency increased. Some skills, like Collect, Steal and Capture, will have their chance to succeed increased. Just be careful when fighting some bosses, as they can enter a boosted state (dark aura), which is usually followed by a powerful attack.

With that out of the way, let's delve a little deeper into some of the mechanics regarding weapons. The equipped weapon's physical attack, coupled with the character's physical attack, will determine the damage done by a normal attack. Also, the currently equipped weapon will be the only one that provides its stats to you, since some characters will be able to equip more than one of them. A skill that is assigned a weapon, like Cross Strike being a sword skill, will have their damage calculated by the sword equipped and not their currently selected weapon. For an elemental attack, the weapon with the highest Elemental Attack will be taken into account and not the currently selected weapon. 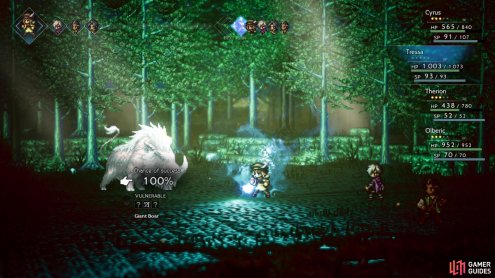 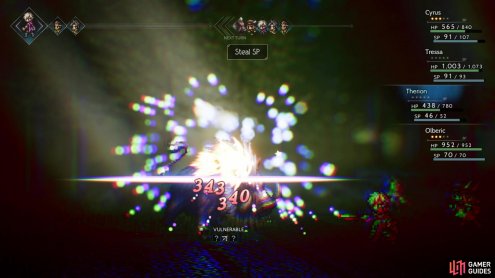 What RPG is completed without the hindrances in combat called status ailments. There are a number of them, including the tried and true, like Poison, but others are unique to Octopath. Note that Rest and Rehabilitate will cure all ailments, with the latter preventing them for two turns.