There isn't much to do here in Clearbrook, except for some very powerful weapons that can be stolen. There is a slight problem, though, as both of these weapons are only a 3% steal, which means that getting them will prove to be extremely troublesome. If you don't want to save your game and retry endless (reloading when you run out of chances), then you can just hope you get lucky. So, near the western exit of the town is a granddaughter blocking the door to her house. Provoke her with H'aanit (three strength fight, but weak to swords, so Linde works fine) to knock her unconscious, then make sure Therion is in your party. Save your game (completely optional) and inside is an old man.

He has two axes for stealing (cannot purchase), an Argent Axe and a Golden Axe. Both are superb weapons, but the latter is stronger. Whether you get it or not, when you're ready to proceed with Alfyn's first chapter, speak to him by the equipment shop. Alfyn is an apothecary, meaning he deals with medicines. After taking care of a patient, he visits his mother's grave and is greeted by his best friend, Zeph, who is also an apothecary. While enjoying a little talk, bad news comes in, as Zeph's little sister has been bitten by something poisonous. To find out what bit her, Alfyn asks around the village. 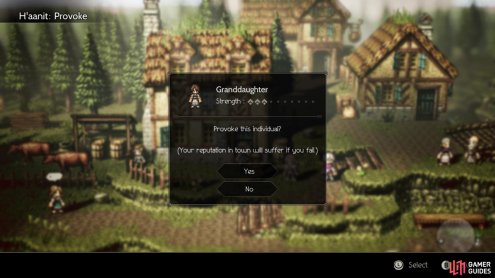 This is where his Path Action comes into play, Inquire, which is similar to Cyrus' Scrutinize. Unlike Scrutinize, though, there isn't any chance of Inquire failing, although you will run into a level limit, similar to other Noble actions. There isn't many people around town to Inquire, although you can get a discount at the inn from the woman by the western exit and a hidden item or two. The woman in front of Zeph's house is the one you need to Inquire to continue the story, which is shown with the green speech bubble.

Thanks to Lily, who is Nina's friend, you find out that she was bitten by a blotted viper. Before an antidote can be concocted, the original venom is needed and there happens to be a nest of vipers in the Cave of Rhiyo. That'll bring us back to the present, where you will need to journey into the cave and bring back a sample of the venom. Alfyn will join your party, so make sure you equip him with some stuff before heading out the eastern exit to the Path of Rhiyo.

Tip: You might want to open the chest (Iron Axe) inside of Zeph's house while you're in the middle of Alfyn's tale, as he will block the door and he is a challenging fight when using Provoke at this point in the game.

Tip: Before setting off, you will want to go ahead and purchase a bunch of Herbs of Healing from the Provisioner, because of the upcoming boss battle. You might also want to buy some Soothing Dusts, Essence of grapes and Noxroots.