Before setting off to rescue Philip, make sure you have Olberic properly equipped with some new equipment (or stuff you have in your inventory). When you’re ready, exit Cobbleston via the northeast.

Before you can get to the Brigand’s Den, you will have to go through the Mountain Pass, which is a short area. As soon as you enter, there will be a chest to the north of you, so head up that way and open it for a Healing Grape. Now, venture all the way to the southern end of the map and follow it east, until you spot another treasure chest (Inspiriting Plum). Continue north and after you ascend some stairs, there is a path you can go on to your east, leading to another chest (Light Soulstone). Follow the remaining path, crossing a bridge and save your game, then hug bottom part to grab the chest (Old Coin).

Approach the bandits for a scene, then a battle. This fight is the same as the one in Cobbleston, except you have your entire party with you, so it will go quick. After the battle is over, you can enter the Brigand’s Den.

When you enter the cave, go north and then east until you reach a chest, which contains a Healing Grape. Note that there is a pretty well-hidden path on the right side near the previous chest, which wraps around to lead you to the chest you likely saw in the background (Black Cap). Return to the entrance and venture west this time, grabbing the chest on the ledge by backtracking a tiny bit after climbing some stairs (Fire Soulstone). North of the previous chest is another at the end of a trail, which contains a Copper Lantern. Follow the rest of the way to a save point and merchant, but take note of the path in front of them, leading to one final chest (Inspiriting Plum). Head east from the save point to come upon the boss. 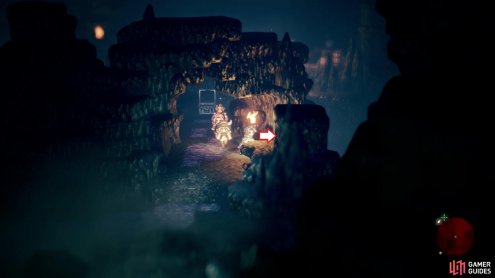 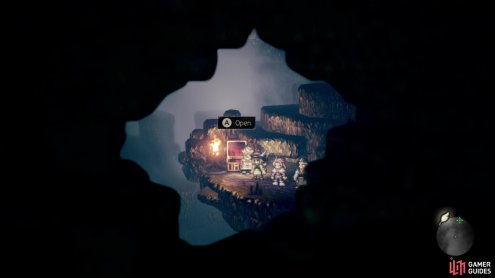 Tip: It’s a good idea to level up Olberic to around 9 or 10 before the following boss battle, just to be on the safe side.

Gaston can be a tough boss, especially considering he is all physical, and he comes with a couple of friends. The two Brigands only know two attacks, the normal attack and Thrash, which hits your entire party. The damage will add up, so you will want to get rid of them as soon as possible. They are weak to swords, axes, fire, wind and darkness. With them out of the way, the battle will be a little bit easier, but Gaston can still put out some damage.

His regular Attack can put a bruise on you and Level Slash hits your entire party for much more than that. Gaston can also use Clobbering Strike, which deals damage to a single target, but it can also inflict Unconscious. By far, the nastiest thing in Gaston’s repertoire is when he "grins and whirls his blade," as this will be followed with Mighty Blow, an attack that can deal 500+ damage to a single person. Naturally, breaking him when he triggers his dark aura and before executing this move is the ideal way to avoid it altogether. Gaston is weak to spears, daggers, staves, ice and lightning.

With the boss of the brigands down for the count, he’ll reveal that he doesn’t know where Erhardt is, but knows someone who might know his location. You will have to journey to Victors Hollow to find this Sir Gustav. You’ll return to Cobbleston and when you regain control, make your way to the southeastern exit for more scenes and the end to Olberic’s first chapter. 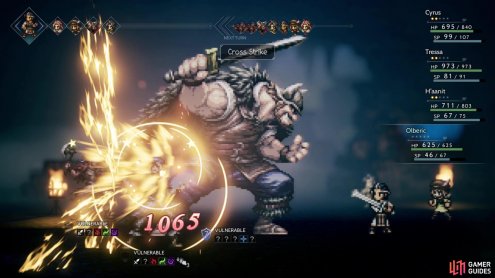 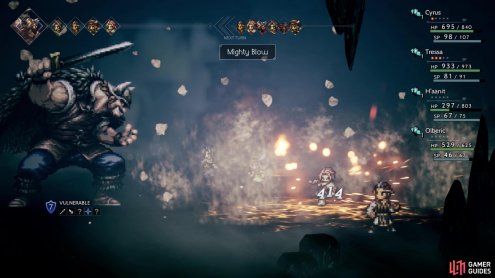