You will begin in a classroom, teaching two students about some history, including the current city you’re in, Atlasdam, as well as a lost place called Hornburg. The class will end and you’ll be stopped in the hallway, with a guard mentioning that you’ve been granted permission to enter the special archives. You’ll now gain control of Cyrus and be given a short tutorial on the radar (or minimap). This is shown in the lower right corner of the screen and will be used extensively when exploring.

The green icon indicates the main story objective, while an orange star shows where you can begin a Side Story, which are sidequests. The feather icon is for save points, while the exclamation point icon is for hidden items, something you’ll learn about soon enough. Feel free to look around upstairs, but you won’t find anything right now, so head downstairs for a cutscene. You’ll be forced outside of the palace after the scene is over, but return inside for right now. On the bottom floor, on the right side, you will find a chest in the middle room, which contains a Thunder Soulstone. To the left of the main entrance will be three chests, which contain an Herb of Awakening, Inspiriting Plum, and Healing Grape. 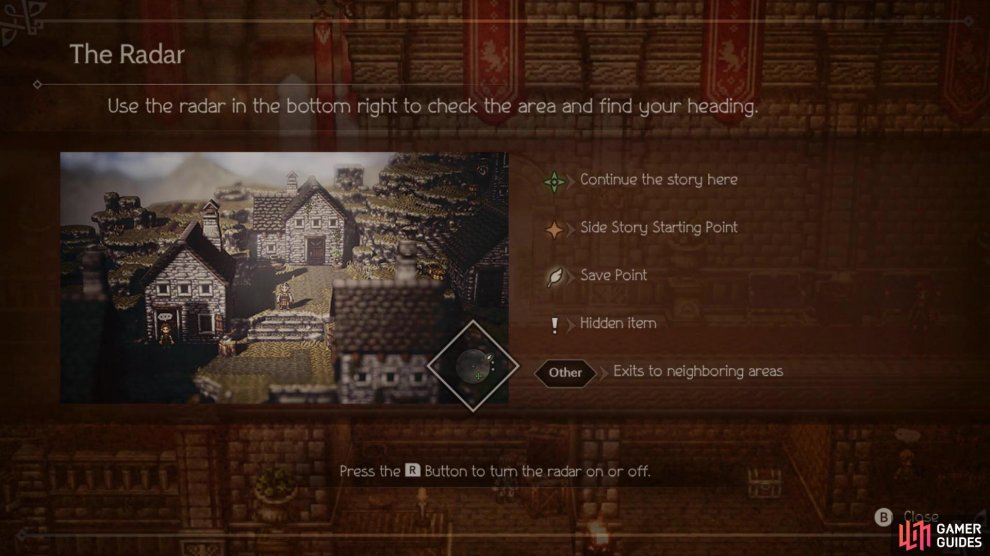 Exit the palace and head south, where you’ll find the save point for Octopath Traveler. You have a total of nine different slots, so it’s always important to keep back-ups, in case you need to do something else. To the south of the save point is the castle town and to the left is the library, which is where you need to go for now. Enter the library for some scenes, where you’ll be summoned by the Headmaster while looking for the tome Cyrus wanted. Rather than being to go there yourself, the game will automatically place you at the school and you will meet Headmaster Yvon. Being none too happy about having information from the special archives leaked to the public, he mentions the special archives will be closing early.

Back in control once more, return to the library and Mercedes, the keeper of the library, tells you she couldn’t find the tome either. So, it looks like it was stolen, according to Cyrus, and there’s a mystery afoot! Being the lover of knowledge and puzzles, Cyrus takes it upon himself to learn who the culprit is. Once outside, you will be introduced to Path Actions at this time, with Cyrus’ being Scrutinize. Basically, you can go up to any NPC with a speech bubble and press the Y button to bring up a list of Path Actions. Of course, you only have Scrutinize right now, which allows you to learn some information.

Note: In Atlasdam, Scrutinize doesn’t have any consequences, but in other places, you will not be so lucky. That’s because Scrutinize is one of the Rogue actions, which means that each time you use it, there is a chance that it will fail (the percentage is always shown before you use it).

Start off by using Scrutinize on the guard at the library’s front entrance to learn that he has a key to the archives, but was sleeping on the job. Now, head east a little bit and use your Action on the guard to the south. The information you gleaned off of him says "A Hidden Item," which actually puts a hidden item on the current map. However, it’s not so hidden, as it flashes and an exclamation point is actually shown on your radar. This hidden item is located in the planter to the right of the library’s entrance, netting you a Light Soulstone. Next up is the guard in front of the palace, who will place a hidden item at the end of the alley to the left of the school (Odds and Ends). 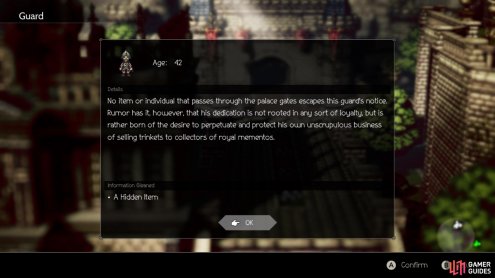 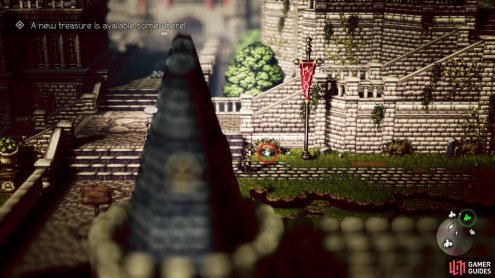 Climb the stairs to find another person you can use Scrutinize on, in front of the gate, who unveils another hidden item. This one is close to the entrance of this entire area; it’s in a bush right next to a short set of stairs by the front guard (Inspiriting Plum M). There’s a boarded up doorway to the right of that last hidden item, but you can’t do anything with it right now. Enter the school for now and head straight for the Headmaster’s office, as there is nothing else to be found inside of the building. Use Scrutinize on him to find out that he also has a key to the archives, but he hasn’t been there for a long while, so he can’t be the culprit.

To continue the story, return to the library to find two people you can use your Path Action on, the librarian and another person. The librarian mentions that only Yvon and the guard outside has a key, while Russell talks about some gambling debts he has…hmm, suspicious. After using Scrutinize on the four NPCs with a green speech bubble, Cyrus will go outside into the middle of the map and make a deduction about the real culprit. You will be asked a few questions, which you actually have to answer. The following are the correct answers:

– The headmaster and the guard
– The guard’s

After a bit of deduction, Cyrus pinpoints the culprit as his one colleague, Russell. All that’s left to do is find him and make him confess, with Cyrus pointing out that he’s been doing his work underground. You’ll get a brief screen telling you to save your game often, but that’s the number one rule in any RPG game. Before you head for the Subterranean Study, though, there’s some other stuff to do in Atlasdam.

The first place to explore is the palace, despite you already looting the chests earlier. That’s because there are people there you can use Scrutinize on, the first of which is on the guard right in front, who has another hidden item for you to find. This one is to the left, on the ground floor, by the older man sitting down in the first room (Healing Grape). There is a little boy in the lower right corner, who is hiding an item among the boxes right next to him (Buckler). Lastly, there are two guards in front of the throne room, yielding two more hidden items. One is in the dining room in the upstairs left corner (Olive of Life), while the other is in the room in the upper right corner (Small Cup).

You can enter the town portion now, which you’ll want to do for two reasons, for more people to Scrutinize and to do a little shopping. You start the game with 2,500 Leaves (the currency in the world of Orsterra), so you won’t be able to deck Cyrus out in the most expensive stuff available, but you will be making things a little easier when you visit the Subterranean Study shortly. There will be someone available to Scrutinize as soon as you enter the town, who will offer some information in which the residents will be more susceptible to Guidance. This pertains to another character, so don’t worry about it. 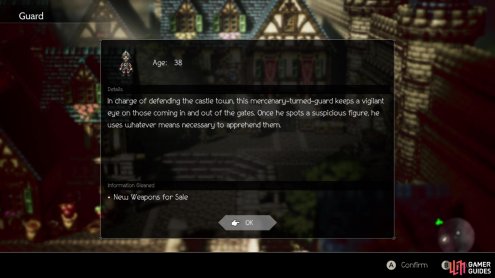 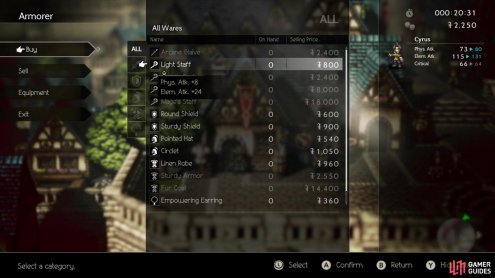 Straight south from this man will be two children who you will be able to use your Path Action on. The boy will offer Smarter Bartering, which is another thing pertaining to a character you don’t have right now, while the young girl has a hidden item. This item is found to the left of the equipment shop to your west (Light Soulstone M). Speaking of the equipment shop, go ahead and browse its wares. Go for the cheaper stuff, due to lack of money, like the Light Staff, Round Shield, and Pointed Hat. Don’t worry about a chest piece, as you will be picking one up in the dungeon. Also, don’t forget to sell some of the stuff you have, like the Small Cup and Odds and Ends, which are items that "fetch a modest price if sold."

You’ll be coming back to the shop shortly, so exit and enter the building next to it to find the tavern. The keeper allows you to change your party members, your equipment and even restore your reputation (this will be useful and explained later on). The two patrons inside the tavern will yield hidden items, one of which is on the barrel just outside the tavern (Empty Coin Pouch), with the other being in front of the barrel by the house in the lower right corner (Nourishing Nut).

Note: The Nourishing Nut is an item that increases your max HP permanently.

There are two more NPCs to use Scrutinize on before being finished, both on the eastern side of the town. The guard near the exit, who can be tricky to talk to right now because of the prompt about not being able to leave, will unlock a few extra pieces of equipment at the shop, while the man in front of the inn will offer a slight discount at the inn. The only other building to check out is the Provisioner, who sells items to use in battle. You might want to pick up a few extra Healing Grapes, just in case, as well as one or two more Inspiriting Plums. The new wares at the other shop is just an expensive weapon and two accessories (the Empowering Earring is a good choice if you have the money for the extra health). When you’re finally ready, save your game and enter the Subterranean Study.