Olberic’s story begins with a flashback, back when he was a soldier. He witnesses a trusted friend strike down his king and as they clash swords, Olberic wakes up in Cobbleston. A child of the village visits him, saying that the headman wishes to have a word with him. When you gain control of Olberic, you will find the headman in front of his house in the southern end of town. He’ll ask you to put some of the men through some training, which will unlock Olberic’s Path Action, Challenge.

This action is pretty much the same as H’aanit’s Provoke, except you will have full control over all your actions and equipment in battle. Unlike Provoke, though, you don’t have to worry about a percentage, but you will sometimes need to be a specific level before you can Challenge some NPCs. Because of the lack of good equipment, just go ahead and Challenge the two NPCs you are required to, which have a strength of one. They should go down easily, after which, you decide to do some rounds. 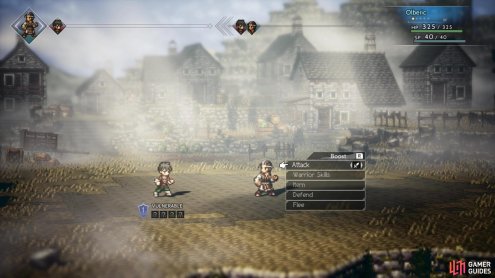 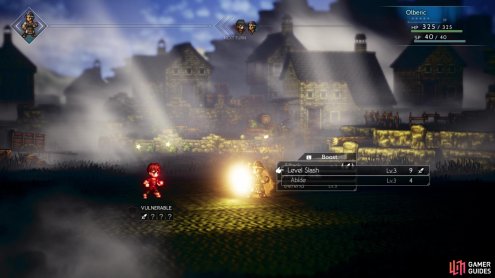 Start making your way towards the northeastern exit, when you get word that the bandits are attacking. The game will take over here and you’ll be forced into a fight with three of them. Two only have one shield point, while the front one has two. They are all weak to swords and you have a skill called Level Slash, which will hit all of them with your sword. Olberic is pretty beefy, so you shouldn’t need to heal, but don’t be hesitant to do so if you need it. Upon defeating the brigands, more scenes will play out, then Olberic will officially join your real party.