Exit S’warkii and go north to the save point, where you will spy a chest in a small hill to your northwest (Herb of Awakening). A little west of that should be a NPC named Roving Naturalist. Despite what was said previously, this NPC has something for the [Rite of Passage] Side Story. Scrutinize the NPC to glean a piece of information called Where the Giant Boar Roams. Note that this is only one of two ways you can finish this Side Story, but this can be done right now. Return to the NPC in S’warkii with the information to finish the Side Story.

Remember where the NPC was located on the trail? Head south from there, hugging the right wall, and you will discover a path with a chest (Slippery Nut). Keep going now to West S’warkii Trail. When you reach the signpost, you will see three different ways to go, with one path being super short and housing a treasure chest (Inspiriting Plum). Despite the signpost saying Victors Hollow is west, it’s not actually straight west and the eastern path will merge with the western. So, go west to another split (Victors Hollow is north and out of your league) there will be a chest to your left, hidden in a little alcove (Olive of Life).

Return to the signpost and venture south to a save point, then open the chest just north of there for a Herb of Light. The trail south of the save point will curve east and then back west, before leading southwest. Right when it does this, you will find a hidden path to the east that leads to the Path of Beasts, an optional dungeon of sorts with a Danger Level of 15. Ignore it and continue southwest to North Bolderfall Pass. 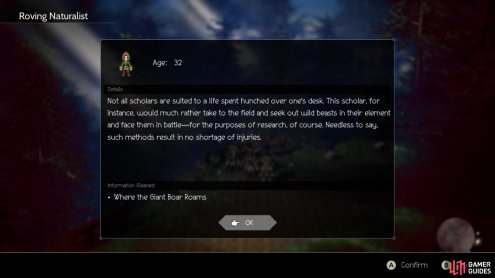 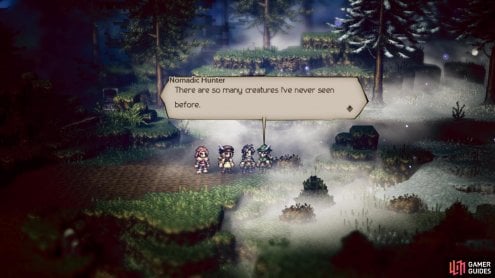 Immediately upon entering, there will be a save point, with a long bridge to your west. This bridge will bring you on the path to Clearbrook eventually, but you’re not going there right now. Instead, continue south and at the fork ahead, go south even more for a chest (Healing Grape). Take the other path at the split, heading eastward, to arrive at Bolderfall.