Fast travel to Atlasdam and take the only exit out of town. Take the northern path at the split, to get to North Atlasdam Flats. If you head straight west, you will find the entrance to The Whistlewood, which is set at Danger Level 15, but it’s always nice to have it marked on your map. Return to the main path and follow it north, to another save point and a wooden sign, which points out that Noblecourt is to the north and Flamesgrace is to the west. You don’t want to go north, so west it is. Before you reach the next zone, look to the south to spot a chest with an Olive of Life M in it. Exit to Northern Flamesgrace Wilds.

Note: It hasn’t been talked about yet, but Tressa’s talent is called Eye for Money. This basically gets you free money as you travel from zone to zone. It appears to be based on the number of steps taken, with a maximum for each zone that depends on a proposed number of steps it would take to reach it.

Travel west until the path starts bending to the south, where you’ll find a little dead end you can go on with a chest waiting at the end (Olive of Life). Continue south to a save point and a split in the path, with Flamesgrace to the east and S’warkii to the west. While your final destination is S’warkii, according to this walkthrough, you will be paying a quick visit to Flamesgrace to just enable fast travel. There will be another chest located south of the stairs that are just to the east of the save point (Herb of Clamor). Follow the path east to reach Flamesgrace.

Feel free to look around and do any Path Action, if you want, with a special interesting in purchasing the Peacebringer’s Garb from the merchant next to the weapon shop. Exit the town and start heading west at the fork, stopping to open the chest to the south for an Inspiriting Plum. Exit to Western Flamesgrace Wilds.

Note: At this point, you likely gained enough JP to get another skill on your main character (100 JP option). Whenever a character learns four skills, they will unlock a Support Skill. These can be equipped like any piece of equipment and are completely passive, so you don’t have to do anything to activate them. 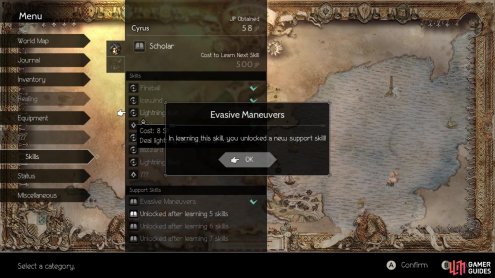 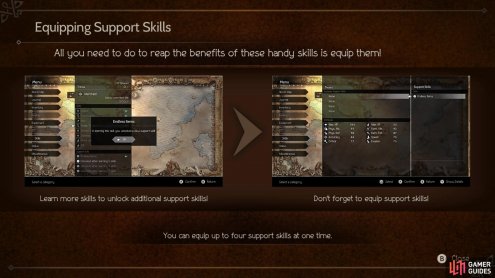 Travel straight west to find a chest at a dead end, which contains a Healing Grape. South will eventually bring you to another split, with a chest located in the southeast corner (Shadow Soulstone). Continue west, stopping only to collect the contents of the chest you notice along the way (800 Leaves), then keep going until you reach a save point. Northeast of the save point is Hoarfrost Grotto, a Danger Level 25 area. There is also a slightly obscured chest just south of the grotto (Critical Nut). Continue west to arrive at the North S’warkii Trail.

There is a short trail not too far from where you begin, that leads to a chest with an Olive of Life inside. Keep going west to find a save point, then start travelling south for S’warkii. The path will curve slightly to the southeast, which is where you’ll find a chest to the north (Healing Grape). A little further south will be the village of S’warkii.