You’re left with another choice as to who to recruit next. You can fast travel back to Flamesgrace to start Ophilia’s first chapter, which you will be doing shortly. Before that, though, it’s time to take a quick detour to get another town on your fast travel list, plus you will be finishing up a side story along the way. Exit Bolderfall and return to the bridge with the save point next to it. Cross the bridge and venture south, stopping right when the path starts veering off to the east. There is a chest on the ledge above you, with the path leading to it hidden off to your left (1,000 Leaves).

Double back to ground level and go east, then south, past the bridge and to another chest (Olive of Life). Cross the bridge and you will reach South Bolderfall Pass.

A save point will be not far to your south, along with a bridge and two other paths. There’s a chest next to the bridge, on the western side, so open it for a Herb of Awakening. Reading the signpost will tell you that Quarrycrest is to the west, which is part of Cyrus’ and Tressa’s Chapter 2 story, but you won’t be going there yet. Carry on over the bridge and go north for a chest (Wind Soulstone), then travel south from the bridge for another chest that’s on a wooden walkway (Inspiriting Plum M). If you manage to head all the way down to the bottom of the ravine, then you will find the entrance to Carrion Caves, a Danger Level 20 area, so enter and leave to put it on the map.

All the way back on the western side of the bridge, run south and when the path veers off to the east, open the chest to your south for a Healing Grape. The trail will eventually lead you to West Clearbrook Traverse. 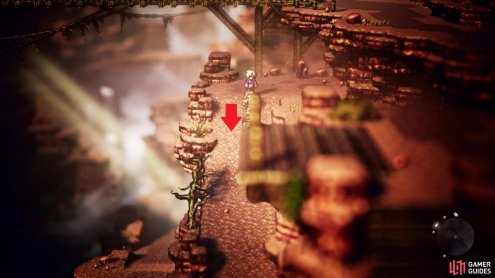 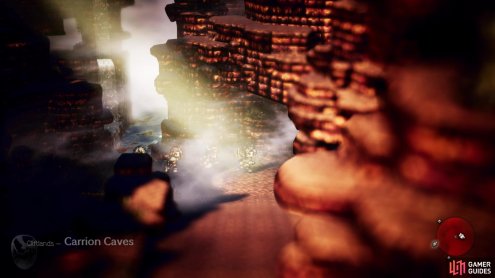 It’s time for a little change in scenery, so head south of the bridge before you to spy a NPC and a chest. The chest contains Odds and Ends and the NPC is going to be key in helping to finish [Kaia, Mother of Dragons (I)]. She doesn’t have anything worthwhile on her, but Scrutinize her for a hidden item to appear in the area. Cross the bridge and you’ll happen upon a save point, with Clearbrook off to your east. Before you enter the town, though, cross the bridge to the south and open the chest (Olive of Life), then you’ll find the hidden item off to your left (Giant Egg). Double back to the save point and run east to arrive in Clearbrook.

This town is now on your map and you can fast travel to it anytime you want, but look on the far eastern side of the place for a purple chest (Dubious Gold Ore). With the Giant Egg in your possession, fast travel back to Bolderfall and hand it in to the questgiver to finish up that side story.

With all of that out of the way, fast travel back to Flamesgrace and let’s begin looting the place. You won’t find much for Purchase or Stealing, besides one NPC, who is inside of a building. You will need to Provoke the woman blocking the door out front in order to gain access to the inside (Silver Sword, Headgear, and Iron Vest). Scrutinizing the NPCs in the town will net you three hidden items, an Injurious Seed, Inspiriting Plum (M), and Shadow Soulstone. In the bottom area, you will be able to access the Cathedral area, where you can get a Circlet from the one NPC. This piece of headgear is nice because it increases your max SP.

You can also head inside of the Cathedral for a few more NPCs, with the lady at the altar unlocking new weapons for sale. There are also two chests inside of the cathedral, with one being at the front of the place on the right side (Healing Grape) and the other is located behind the left side of the fence in front of the altar (Herb of Valor). That’s about all you can do in Flamesgrace right now, so find Ophilia near the top of the main area and speak with her to start her first chapter.

Note: At this point, this will be your fifth party member, so you will want to have someone sit out. Who you pick is up to you, but bring Ophilia along to level her up, as she is a pretty good healer and you don’t have one of those yet. 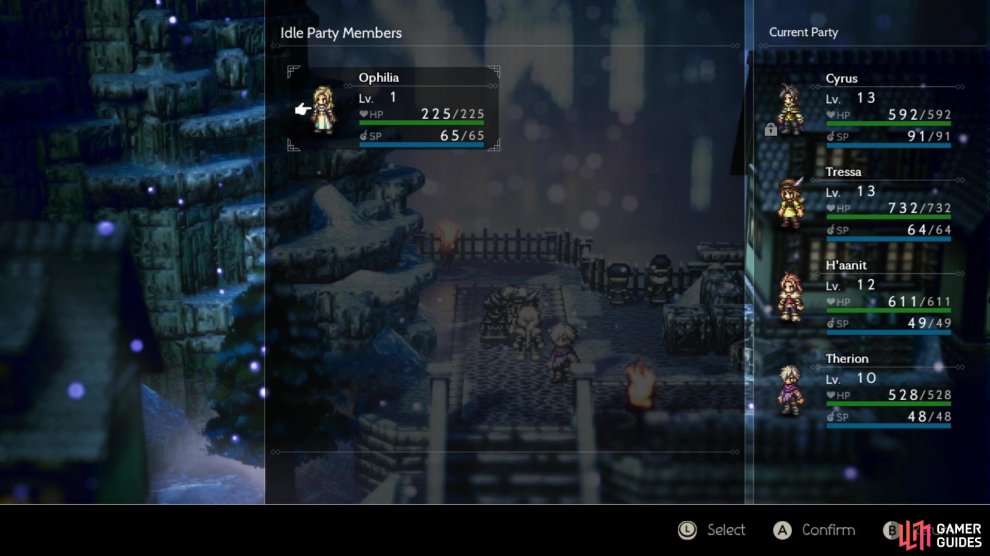 Ophilia’s story starts out with her speaking with a woman named Lianna, her adopted sister. You will regain control temporarily outside of the room and as you approach the main hall of the cathedral, another scene will take over. You will learn of the creation story of Orsterra, and also introduced to Archbishop Josef. As Ophilia is left to prepare for the next service, a lone child wanders into the cathedral, looking for his mother. It is here that you’re introduced to Ophilia’s Path Action, Guide, which allows to do just that, guide people as they follow her wherever she goes.

The quirk with Guide is that you will need to be certain levels to have specific people follow you. You can only Guide a single person at a time and upon trying to get another NPC, you will have the option to replace your current one. For now, use your Path Action on the boy and step out of the cathedral, where you will find the boy’s mother not far to the south. Once this scene is over, some more will happen and you will finally be in control again, with your objective being to head to the hill overlooking the cathedral. Remember where you first talked to Ophilia to start her chapter? Well, head there to view a quick cut to the hill, where more scenes will play out. When that’s finished, Ophilia will join your real party and you can set out for the Cave of Origin.