A desert town, complete with a large tavern that houses a stage where dancers entertain the patrons, Sunshade is not an unusual place. To the right of the entrance is a large building where the dancers stay, with a guard out front. He has a Falcon Dagger for Purchase/Steal, which is nice, but you may already have one in your inventory at this point. The guard, when Scrutinized/Inquired, will unlock a hidden item in the northwestern corner of town, which is a Silver-filled Pouch that sells for a whopping 8,000 Leaves. The lady guarding the door nearby will put some new weapons for sale for Scrutinizing/Inquiring her. Should you Provoke her and defeat the lady, you will be able to enter the building and find a chest (Traditional Dancer Garb).

Up the stairs and to the left of the inn is Primrose herself, but there’s not much else located outside of the tavern, which is at the north end of the town. There are a lot of people in here, two of whom will reveal hidden items, one being a Nourishing Nut and the other an Arcane Glaive. You can also unlock the inn’s discount in here, as well as another piece of information that will make Alluring easier, which is Primrose’s action. Up the stairs on the left side of the tavern is a chest containing a Healing Grape. That’s about the extent of what you can do here in Sunshade, so head on over to Primrose and start her first chapter.

Primrose’s story opens up with a flashback to the time that her father was murdered. The game then cuts back to Sunshade, where Primrose and a couple of other girls are getting ready for a show, although some of the girls aren’t too fond of Primrose’s popularity. We also meet Master Helgenish, who is not exactly the best person. You’ll gain control of Primrose here, but you can’t do anything, so just head to the tavern. There is a curtain to the left of the main stage, so go that way. After the show is over, you’ll need to return to the dormitory. 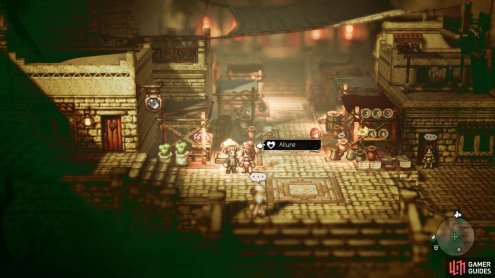 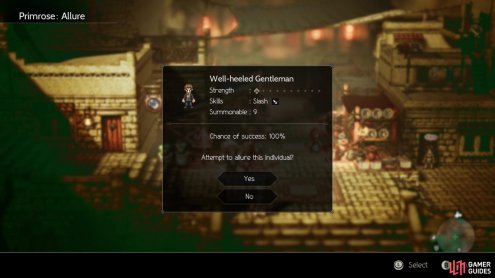 Some more scenes will play, then you’ll finally gain access to Primrose’s Path Action, Allure. This action is pretty much the same as Ophilia’s Guide, but instead of it always succeeding, you have to worry about percentages. After a short display of Primrose’s acting talents, you will need to use Allure on the gentleman with the green speech bubble. He will follow you on success (it’s 100%), so bring him to the tavern. Another scene will play and thanks to Yusufa, you will be back outside. When you reach the southwestern corner, near where you first saw Primrose, the game will take over and Primrose will join your actual party. This means it’s time to finally go after the culprit.