Ravus Manor is a bit different than the other Chapter 1 dungeons you've done so far. Upon entering, head all the way to the western side of the ground floor to find a chest near some bookshelves (Inspiriting Plum). Return all the way to the right side, where you entered, and climb the stairs. There will be a room up here, which contains a chest (Healing Grape). Double back downstairs and to the west, where you'll want to climb the central set of stairs. There's nothing in either of the rooms up on this side, so just travel west to the door, but don't go inside yet. Instead, you'll find another chest at the dead end to the left (800 Leaves).

Now, enter the doorway to arrive at the next area of Ravus Manor. Here, you'll want to journey all the way to the east and enter the small room on the right, where a purple chest will be waiting for you to empty its contents (Wind Attire). Back on the left side, climb the stairs and follow this hallway to the right, opting to forget the rooms here (nothing in them). Just pass the second room is a chest right around the corner (Healing Grape), then some stairs will be present south of there. These lead to a merchant and save point, but forget that and take the upper path to find a chest at the end (Invigorating Nut). There is one final chest hidden underneath the stairs just previously mentioned (Bottle of Befuddling Dust). When you're ready, continue past the save point and approach the item on the table to trigger a scene and the next boss.

Heathcote is a fighting butler and if anime has taught anything, then he's bound to be pretty strong. He comes with a Ravus Guard in tow, who is a bit different than the ones you've been facing throughout the manor. This guard can use Violet Slash to randomly attack four times, but the more annoying skill it has is Steel Defenses, which increases the physical defense of one enemy for four turns. He is weak to swords, axes, wind and light; the guard should be taken out before he can cast the defense buff on Heathcote.

As far as the boss is concerned, he seems to stick to Attack, Slice (a stronger attack) and Double Spear for the first bit of the battle. The latter skill hits everyone twice for ok damage, but it isn't anything too crazy. At some point, Heathcote will "hop lightly," which means his evasion will increase for two turns. He will also have his "senses heightened," which triggers the dark aura you've seen on bosses. This will be followed by Stunning Strike, an attack that hits hard against the entire party, so you will want to break him before that happens. 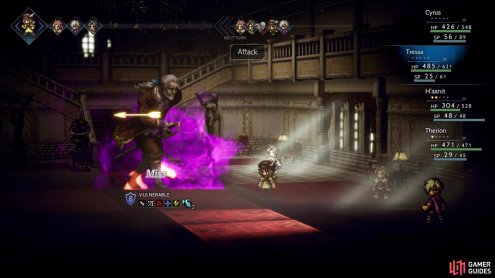 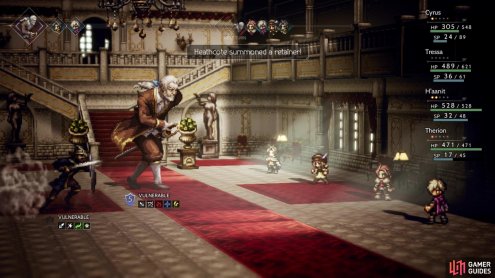 Note that Heathcote can summon another Ravus Guard into battle, but this only seems to happen if he's low on health. Also, the guard only comes in with 50% HP, so it shouldn't take too long for you to get rid of it. However, it might be more prudent to get rid of Heathcote first before taking out the guard again, but it's entirely up to you. The boss is weak to daggers, bows, fire, ice and lightning, which makes Cyrus a great party member.

The boss should go down without too much trouble, after which, some scenes will play out. You will meet the lady of the house and she has a job for you, to retrieve the other three dragonstones. The first one you're looking for, the Ruby Dragonstone, will lead you to Noblecourt, where a scholar is researching it. Exit the city to the north to finish up Therion's first chapter.

Thieving Skills to the Max

Of course, let's take this opportunity to go right back into Bolderfall, as it will now be populated with new NPCs, some of whom have Side Stories for you. Head back inside Bolderfall and look for the Side Stories, of which there are four in total. Two of them are in the town of Bolderfall, with another in Lower Bolderfall and the last one at the Ravus Manor Gate.

You can do the Sparks of Revolution side story right now, so start by heading down into Lower Bolderfall. There are three NPCs down here who have weapons on them that you can either Purchase or Steal. Since the latter doesn't cost any hard-earned money, it's best to go with that route. In particular, you're looking for the Rebel's Axe, Revolutionary Sword, and the Spear of Justice. Bring all three back and hand them over to the Stern Guardsman to finish the side story. 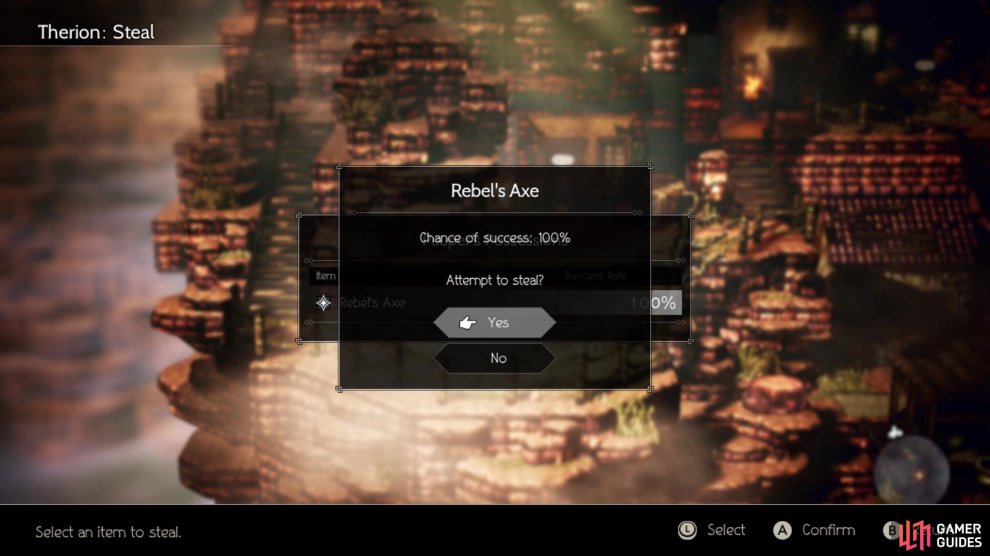 Tip Therion should be a character you might always want in your party at all times, simply because using Steal (the Path Action) is absolutely fantastic in procuring new pieces of equipment from NPCs. His chance to Steal will increase as you level him up.