The Cave of Origin

Path to the Cave of Origin

Before setting off, make sure that Ophilia is properly equipped and save your game, then exit Flamesgrace to the southeast to arrive on the path to the Cave of Origin. It's also a good idea to use Guide on someone with a preferred skill, such as the one person that is three stars in strength in the same area as the exit. When you transition, you should find a chest not too far from where you entered, on a dead end to the south (Healing Grape). Continue west and then north, opening the next chest you find along the way (600 Leaves). The path will keep going up, until you see some stairs leading south. Ignore those and keep climbing up to find absolutely nothing...that was a waste. 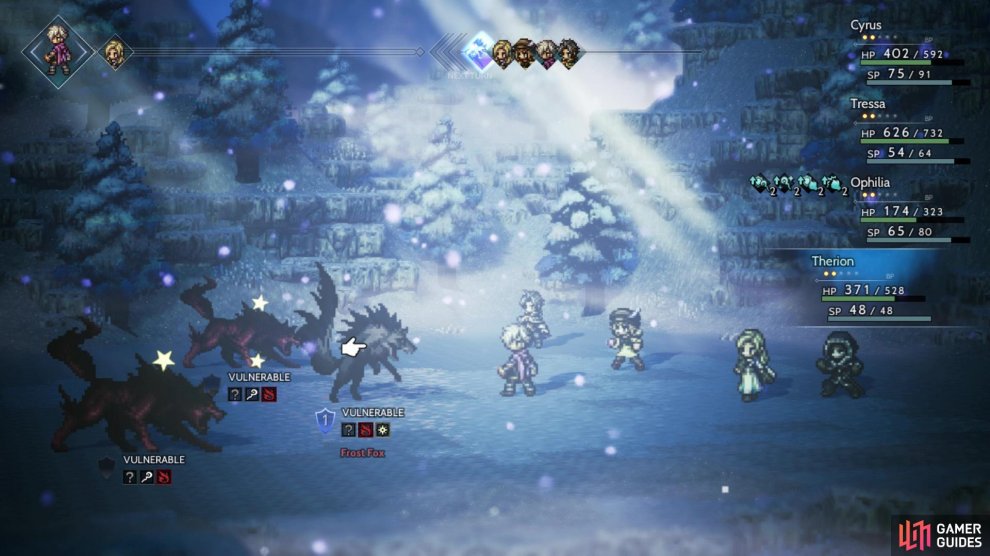 Note: Ophilia's Summon talent allows her to utilize the NPCs that are following her due to Guide. They have charges, similar to the animals H'aanit captures, and stay out a few turns before retreating.

The path before you, at the beginning, is fairly linear, but you should be able to spot a chest above you and if you really pay attention, there is another chest towards the bottom of the screen. You can reach the bottom one right now as you continue east, which contains a Healing Grape. As you progress to the east more, there will be another short path at the bottom, which leads to another chest (Inspiriting Plum). Not much further to the north is another chest, in a slightly lower area. Approach from the south, as the ramp leading down to it is obscured from your view, and open the chest (Shadow Soulstone).

Climb the stairs and after the second set, hug the wall to the right to find a secret passage. This will bring you to a chest to the north of you, which contains a Silver Hairpiece. As you journey west, a small scene will play out, then you will regain control. Not long after that, you can venture south to open the one chest you saw near the beginning of the dungeon (Refreshing Jam). You are approaching the end of the dungeon, as you will spot a save point and the usual merchant. Note that you will want to level up Ophilia a bit before you progress further, as this will make things a bit easier, especially if this is your fourth or fifth character. Step to the north to face off against another boss.

BOSS - Guardian of the First Flame

The Guardian of the First Flame isn't too bad of a boss, but being complacent will end up killing you in the long run. With Ophilia on your team, you have proper healing and if you remembered to Guide someone, you can use Summon in battle to bring that NPC to help out. Thankfully, this one of the few bosses that doesn't have an increase in shields should it be powered up (if you take it much later with more party members). Its basic Attack isn't too bad, while Sweep will hit everyone for decent damage.

The boss has a single-target fire attack called Pyre, which doesn't seem to do too much. Whenever you see the boss increase its power and gain the familiar dark aura, you can expect Flame of the Heavens to be used next, which seems to only hit for about the same amount as Sweep, or even a little lower (it's a fairly weak fire-elemental attack). The Guardian is weak to swords, daggers, staves, ice and wind. At around 50% HP or so, the Guardian will summon Dark Wisps into the battle via The Trial Begins. 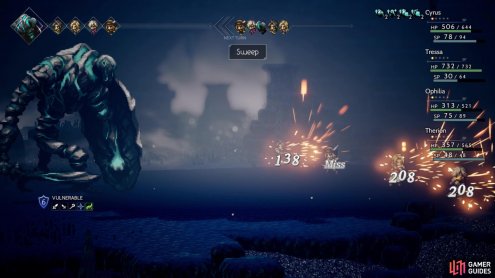 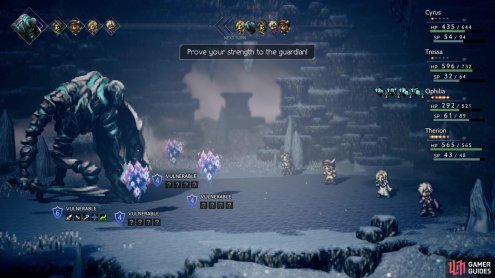 You will want to make sure you defeat these quickly, as they can blow up similar to the Bombs in Final Fantasy, with Self-Immolation. The amount of Dark Wisps summoned depends on the Danger Level, which is directly tied to the number of party members, so if you are following this guide, then you should have three Dark Wisps. They are weak to bows, staves, fire and light, so break them quickly and then destroy them before they have a chance to do anything drastic. As a boss itself, the Guardian is fairly easy, but the Dark Wisps throw a twist to the battle. Once they're gone, though, the Guardian should be fairly easy work.

With the Guardian finished, you will gain the right to go on the journey for the Kindling and some more scenes will play out. When they're all done, you will be back in Flamesgrace and Ophilia's first chapter will be complete (no need to leave the town).

The first place you should go is the cathedral, where you'll meet the boy from earlier and his mother just west of the main entrance. Scrutinize them both to get two hidden items on your map, both in the side rooms to either side. One item will be a Fortifying Nut, while the other is a Copper-filled Pouch, which can be sold to any vendor for a nice 3,000 Leaves. You can also Scrutinize the NPC sitting in the front to get a piece of information titled Rumors of a Knight Ardente.

Outside of the cathedral, there is a man in a jail cell inside of the building to the left. Speak with him to start the side story, The Innocent Inmate, which has two different solutions to it. You can Scrutinize the Witness, who is in front of the weapon shop, for information (An Eyewitness Account), for one solution. The other is to go enter the tavern and use Steal to grab the Dungeon Key off of the Drunken Soldier at the bar. There is really no different between the two, as the outcome is the same, so do whichever option you want. 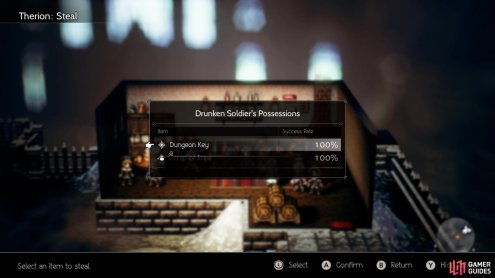 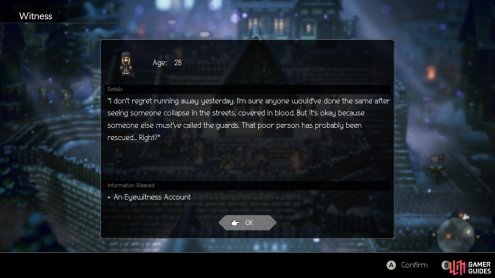 The second side story in Flamesgrace occurs in the city, near to the equipment shop and is called Sir Miles, Servant of the Flame (I). Miles, the client, was recently appointed to the Knights Ardante and he mentions his father was one, too. However, his father was stripped of title for fleeing from battle. He wants to know more about this, so if you remeber, there was a piece of information you gleaned from someone inside of the cathedral, titled Rumors of a Knight Ardente. With this piece of information, speak with Miles again to finish the side story.

The final side story in Flamesgrace is found inside of the tavern, from the Diligent Student. The Slumbering Giant involves the student researching the location of the jotunn, who should reside somewhere in this land. Luckily for you, there is someone nearby that has information on this so-called jotunn. At the base of the hill that showed a view of the cathedral, which you climbed during Ophilia's first chapter, is a Muttering Codger NPC. Scrutinize him to glean a piece of information, which pins the location of the jotunn in Hoarfrost Grotto. This dungeon is located in Western Flamesgrace Wilds, but it has a Danger Level of 25, so you will need to finish this side story later.

That brings us to the next party member, of which there are three left. You should have already visited Clearbrook, which makes doing Alfyn's a lot simpler because of fast travel. Olberic is located south of Rippletide, while Primrose is to the west of Olberic. For now, let's just fast travel to Clearbrook and do Alfyn's first chapter next.