Where you begin, there will be a trail slightly hidden to your immediate east, with a chest at the end (Healing Grape). Continue east and when you finally cross a bridge, look to your east to spot another chest (Soothing Dust). With this in hand, it's time to talk about Alfyn's talent, Concoct. In battle, he is able to make potions and other mixes to aid his allies or harm his foes. There's quite a big list of effects, with the first item you pick determining whether the concoction hits a single target or all targets (friend or foe). Feel free to experiment with it a little bit, but know that some ingredients might be hard to come by at this point in the game. Head north now and at the save point, there will be another chest off to your left (Essence of Plum). Grab the item, then venture east to find the Cave of Rhiyo. 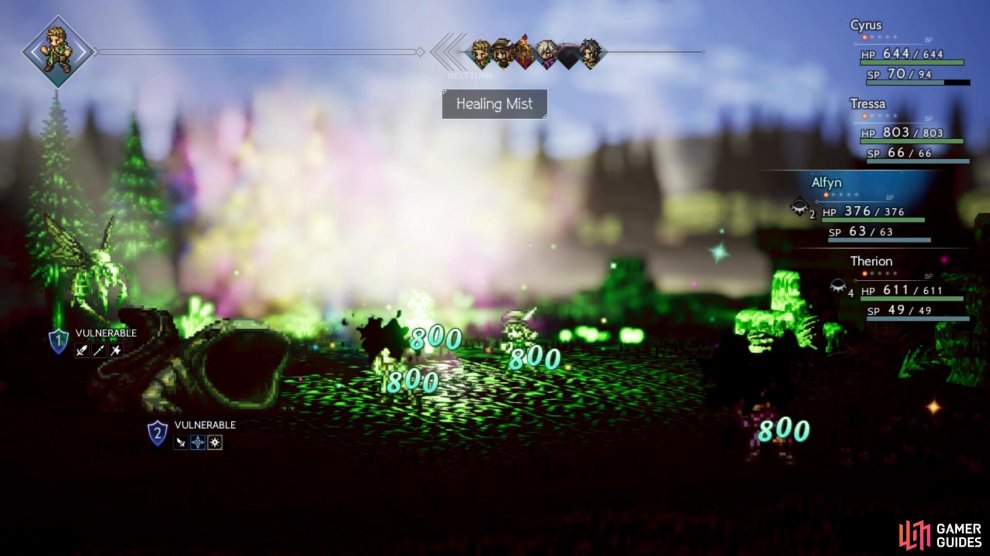 Upon entering the cave, go straight north to find a chest off to the left, which contains a Ruinous Seed. This is a component for Alfyn's Concoct talent and is essentially a more potent version of the Injurious Seed. Climb the first set of stairs to the east and then move along the bottom here to find another chest (500 Leaves). As you ascend the next set of stairs, you should see a chest on the ledge to your west, so hug the wall above the flame to access it (Injurious Seed). Above the bridge is another path leading to yet one more chest, containing a Soothing Dust.

Cross the bridge now, then venture south to the bottom and open the chest in plain view for an Inspiriting Plum. As you continue east, hug the bottom of the screen and you will run into another chest in the bottom right (Invigorating Nut). Lastly, head north and a path will veer off to the east, leading to one more chest that's partially hidden (Bronze Vest). The usual save point and merchant will be just up ahead and to the left of the save point is one final chest (Purifying Dust). Walk into the flowers to witness a scene and fight your next boss.

If you have a few friends with you, then the Blotted Viper will have some friends of his own, Mottled Asps. These things aren't too bad, as they only have a basic attack, but they can also use Venomous Fang, an attack that is weak and has a chance to poison a single target. You will want to get rid of them as soon as possible, since you don't want to keep worrying about curing poison. They are weak to swords, daggers, bows, staves and ice, so quickly break them and get rid of them.

As for the big baddie, it has its normal attack, as well as Sweep, which hits everyone. One of the more annoying moves is Poison Breath, which can poison your entire party. Luckily, you can offset this with Alfyn's Concoct; use a Soothing Dust and Noxroot to cure the entire party of the poison. Constrict will do a little bit of damage, but it might also cause Unconscious, which basically means that character will be unable to act. When you see the viper "ready to strike," it will emit the familiar dark aura.

Unlike other bosses, who will be queueing up a big attack, the Blotted Viper will gain three attacks on its next turn, so you will definitely want to break it before that happens. One final attack that the boss has is called Big Bite, which is four fairly damaging random hits, with each one having a chance to poison. This seems to be reserved for the final turn after it has the dark aura. The biggest thing about this fight is managing the poison, so having Soothing Seeds/Dusts and Noxroots on hand will make things a lot easier. Break the boss before it has a chance to get three turns and this fight will go pretty smoothly. The boss is weak to daggers, axes, staves, ice and dark. 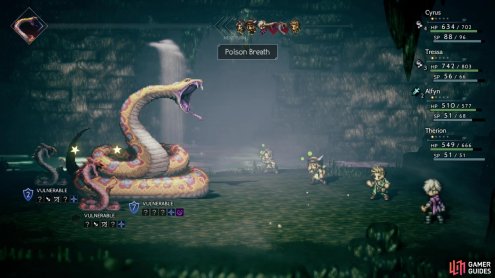 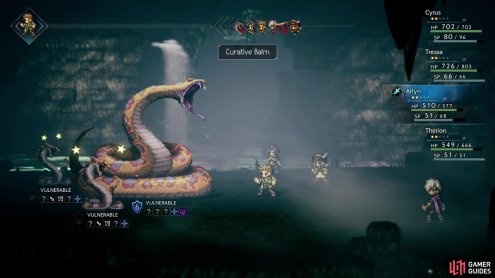 With the snake out of commission, Alfyn will procure the venom and return to the village. He hands it over to Zeph to do the work, then figures it's time to rest at his home. You'll need to head on over there yourself and upon doing so, you will trigger some more scenes and the end of Alfyn's first chapter.

Thankfully, you don't need to exit the town to have it populated with more NPCs. It's better to keep Alfyn in your party for now, since Inquire will always work. Start off by using Inquire on the NPC standing next to the General Store, which will put a hidden item on the map (Resistant Nut). Next, head to the tavern, where one of the people there will put more items in the store. What it actually does is put a new body armor for sale, called Elemental Light Armor, which is quite nice but also pretty expensive.

The granddaughter guarding the door to the old man with the Golden Axe can also be Inquired, but Alfyn needs to be level 10. This will put a hidden item on the map on the eastern side of the village, which is a Silver Axe, although you can purchase better at the shop. There are two Side Stories in Clearbrook, both of which can actually be completed right now. The first, For Want of Fish, can be started near the river on the western side of town.

An angler is lamenting the fact that he can't get any fish. Head to the tavern and speak with both of the patrons sitting there, who mention the prawns and how the plounder seem to love them. If you check the items the one on the left has, you see some Saucy Prawns. Either Purchase/Steal them and bring them back to the fisherman by the river to finish this side story.

The other side story, Meryl, Lost then Found (I), can be started by speaking with the lady NPC at the graveyard. She managed to find a bottle that mentioned that she is adopted, but she is having trouble bringing this up to her parents. Meryl's father can be found right outside of the tavern and if you use Inquire/Scrutinize, you can glean the information about Meryl's Past. Bring this information back to Meryl to finish the side story. 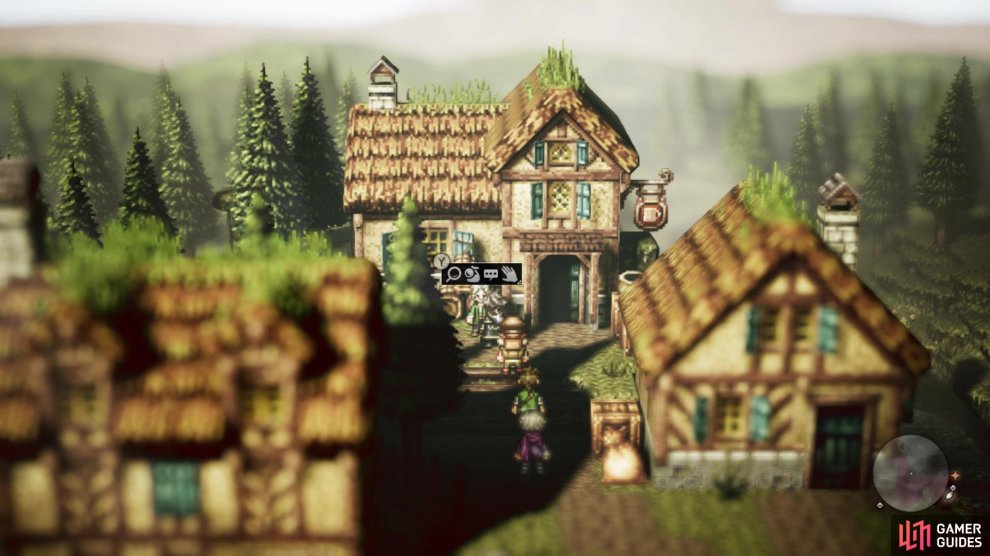 That's about the extent of everything there is to do at Clearbrook, so it's time to move onto the last two remaining party members. Olberic is probably closer than Primrose, but it doesn't really matter which one you choose right now. For the intent of a walkthrough, though, Primrose will be chosen next.