Path to the Whisperwood

The exit to the Whisperwood is located on the western side of the village, so when you're ready, go ahead and enter it. Follow the trail before you, sticking to the bottom of the screen to find a chest hidden in a small alcove (Shadow Soulstone). Around the same area, you should be able to squeeze through a hidden opening that leads northeast, bringing you to another chest (Healing Grape). Venture north, looking out for another chest, setting off on that path when you come to it to open it (500 Leaves). It should be noted that you might want to spend some of your first few battles here capturing some of the local fauna for use in battle. When you're ready to continue, travel west and to the end of the path for another chest (Inspiriting Plum), then exit to The Whisperwood.

Upon entering, there will be a scene, then you will retake control. Head north along the first path to find a chest at the end, which contains a Healing Grape. Travel west now, to the southwest corner, for another chest (Shadow Soulstone), then continue north. There will be another trail off to your left, which carries you to a chest to the northwest (Inspiriting Plum). Head north once more on the main path, then west to another chest that contains 600 Leaves.

As you continue north, you should see a clearing of sorts on your right, which is hiding a trail that leads upwards to a chest (Bronze Vest). There will also be one final chest to your north, which contains an Energizing Pomegranate. A familiar save point will be to your west, as well as a vendor, so stock up and heal as needed, then enter the clearing to confront the ghisarma.

Despite being a singular enemy, this boss can put out some damage, especially if you're doing this with more allies in your team. You will want to keep your characters at top health throughout the fight, simply because Rampage can decimate them, as it can hit three to five times. Its basic Attack and Scratch aren't too troublesome, with Scratch being a slightly stronger version of Attack. When you see it used Readied, that means the boss will be ready to counter a physical attack (not any attack, as stated in the game). 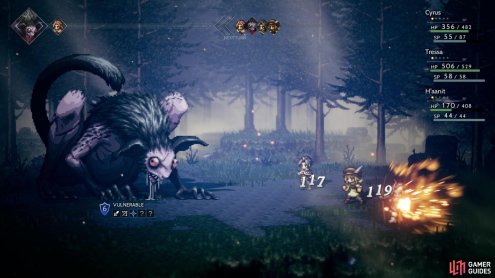 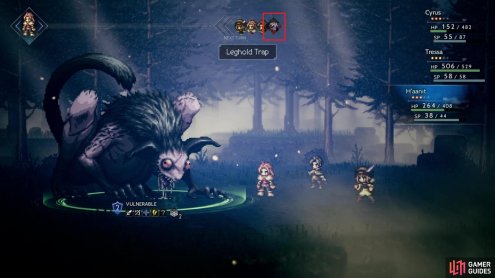 The bigger problem will come when the ghisarma is "ready to pounce," as it will gain a dark aura and on its next turn, it will use Death from Above, its ultimate attack. The easiest way to counter this is to bring its Shield Points down low, then break it after it assumes the pounce position, completely negating the attack. The ghisarma is weak to swords, bows, ice, lightning and light. The main point of this battle, especially with more party members, is controlling the damage from Rampage, as Death from Above can be easily managed.

When you finally fell the beast, you will eventually return to the village, to find your Master's friend having returned without him. You plan to find out what exactly happened to your Master, finishing up this chapter. If you have the money, then it might be wise to update H'aanit's gear, particularly her weapons from the two people who have anything decent for purchase. Also, it might be wise idea to procure some more beasts for her to command, like the Forest Ratkin II, as an example.

There are three Side Stories in S'warkii, once you re-enter after leaving upon finishing H'aanit's first chapter. The only one, given your current party, that you can complete is Ashlan the Beastmaster. Head into the tavern and Scrutinize the Old Storyteller to glean Tale of the Beast Tamers from him. Bring this information back to Ashlan to finish. 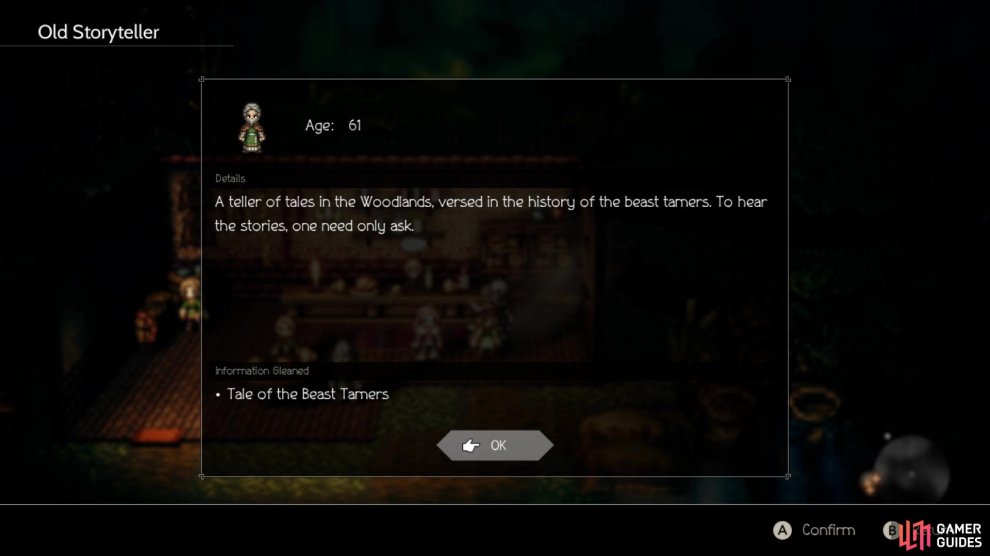 -- Ashlan the Beastmaster (I) -- Rite of Passage -- Way Through the Woods

Your next party member will be entirely up to you, given that you should be able to just fast travel back to Flamesgrace and do Ophelia's opening chapter. Since she is a Cleric, she would be able to provide some much needed healing for your party. However, there are four other characters on the map, with Therion being to the south and Alfyn not much further south from him. Again, it's entirely up to you where you want to go, but for the sake of a walkthrough, you will be visiting Therion next, so Bolderfall is your next destination.