Bolderfall, as you already guessed, is home to Therion, the thief of the game. You won’t really find much of anything for Purchase from its residents, including the Ravus Manor Gate area that is accessible from the southeastern exit. The house to the far north of Therion does have a single chest that can be opened (the other two are locked), which holds 1,000 Leaves. There is also a Lower Bolderdall, which is gotten to from the southwestern exit. It is here that you’ll find the tavern and equipment shop, although you might not need anything.

There is a man blocking entry into a house just southeast of the save point, who will "reward" you with a discount at the inn if you Scrutinize him. The other NPC nearby has a hidden item, which is inside of the blocked house. This item is a Falcon Dagger, a pretty nice weapon, so use H’aanit’s Provoke to get the old man out of the way. The NPC by the main town entrance will give you an increased Stealing chance when Scrutinized. Lastly, the NPC by Therion will unlock new equipment in the shop (some very nice weapons, albeit a bit expensive right now).

Head on up to Ravus Manor Gate to find a bunch of NPCs for Path Action-ing, including some dogs. These dogs, when Scrutinized, will have three hidden items, which include an Elusive Shield, a Dirty Ball of Cloth and some Weathered Boots. The one guard by the gate can unveil a hidden item, but it’s behind the big gate and you can’t go in there right now. That’s about all that Bolderfall has to offer right now, so it’s time to carry on with Therion’s story. 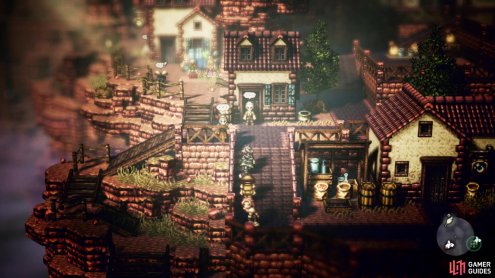 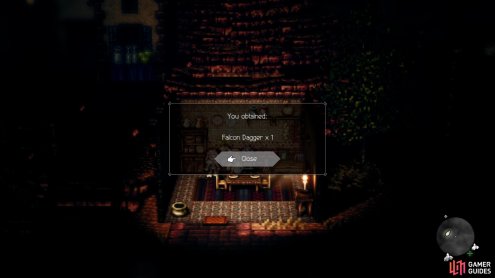 Therion is a thief, which is very obvious at this point, and his quest for thievery has brought him to Bolderfall, as tale of an impossible to steal item is present in this town. After a bit of reminscining and tall tales from the barkeep, Therion makes his way to the Ravus Manor Gate. You’ll start off in Lower Bolderfall, so you’ll need to head up the stairs on the western side, then go to the southeastern stairs to reach the manor. However, now that you have control of Therion, you will be able to open those purple chests you’ve been seeing, with the first one being behind the inn (Stinging Dagger). The other one is located at Ravus Manor Gate, just north of the save point (Iron Helm).

Approach the front gate a little close for a scene, which will prompt an idea for Therion on how to get inside the manor. Return to Bolderfall to overhear some merchants talking and you will then unlock Therion’s Path Action, Steal. This is similar to Tressa’s Purchase, but you can get the items for free, so you should try and steal everything you can. Whatever you don’t want to keep, you can sell at a vendor to get money. There will be another scene as you approach the western side of town, leading to another flashback. Once you regain control, resume your pilfering spree in Bolderfall and even back at the manor. When you’re ready to continue the story, the merchant with the letter is located in Lower Bolderfall.

Note: While a lot of items will be the same across Purchase and Steal, you will sometimes find items that are completely different. However, Steal is considered a Rogue action, so you will find a lot of the more powerful items have a low chance in order to acquire them.

Upon stealing the Letter of Introduction, you’ll return to the present, where Therion will join the rest of your group. If you have any better equipment, such as a Falcon Dagger, then equip it to Therion or buy some more from the vendor in Lower Bolderfall. Don’t forget there is one NPC behind a door in Lower Bolderfall, who has a few items to steal. When you’re finished, return to the manor. Therion will put on an act and finally get past the guards at the gate. Before diving through the window, you will find a guard on the left side of the manor, who is ripe for Path Actions, and if you got the hidden item from the one guard outside, then you can pick up a War Spear nearby. There is also a chest with a Broadsword to the left of that. There’s nothing on the right, so hop through the window to arrive inside Ravus Manor. 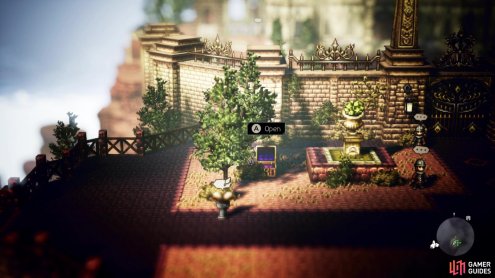 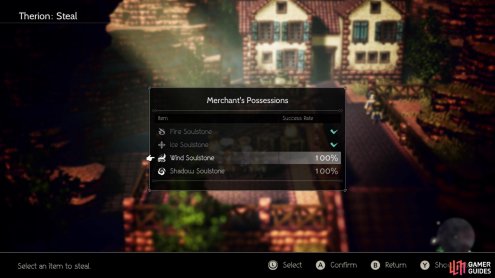