You will enter Rippletide from the eastern side, with there being a NPC you can Scrutinize right away. However, unlike the 100% chances in the initial main story quest for Cyrus, you will only have a 40% chance of success for this NPC. You could save your game, try your hand at it and if you fail, reload that save to try again. Of course, if you do decide to go ahead with it, then you will uncover a hidden item on the docks in the northwestern section of town (Healing Grape M). The first building you see is the Provisioners, who aren’t selling many items, but you can Scrutinize them. However, they yield nothing at all.

Important: You can only fail a total of five times with Path Actions before it will negatively affect your reputation in the town. Should this happen, then the NPCs won’t respond to that particular Path Action and you will have to pay a hefty fine to fix your reputation at the tavern keeper. 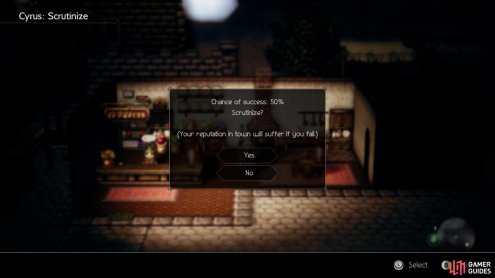 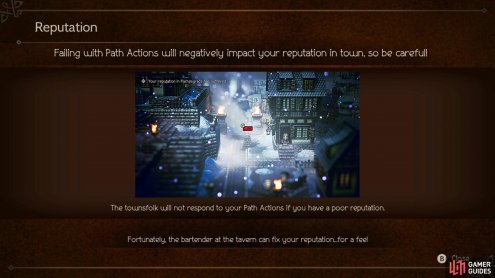 Next door to the Provisioners is the equipment shop, who doesn’t really have anything new for Cyrus, but there is a chest in the corner just south of it (Bottle of Poison Dust). You can squeeze in between the equipment and second Provisioner shops, where a NPC will be hiding. Scrutinize him (80%) for a hidden item on the short dock in front of the save point on the western side of town (Articulate Stone). Just west of that is the tavern, but there is another NPC you can Scrutinize out front (90%), which is next to the older lady by the western exit (Essence of Grape).

Back at the tavern, there is a chest right next to the entrance, which contains a Healing Grape. Inside the tavern is another chest, which will yield 500 Leaves. If you descend the stairs to the south of the tavern, you will find a third chest in front of the inn (Inspiriting Plum). To the west of the inn is another NPC for you to Scrutinize (50%), with "Smarter Bartering" being the information gleaned. This will come in handy very soon. There’s only one more NPC to talk to here, which is the old lady by the western exit. Scrutinizing her will yield a discount at the inn.

After waking up and visiting her mom and dad’s shop, Tressa decides to work on restocking the shop. You’re free to explore the town at this point, but you’ve already looted the place and you don’t really want to spend any money just yet. Cross the bridge to the west for a scene and you’ll witness the haggling skills of Tressa. It is at this point that you will unlock her Path Action, Purchase. By pressing the Y button to any NPC with a speech bubble, you can bring up a list of items that you can purchase from them. 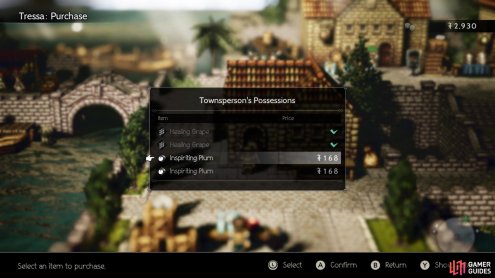 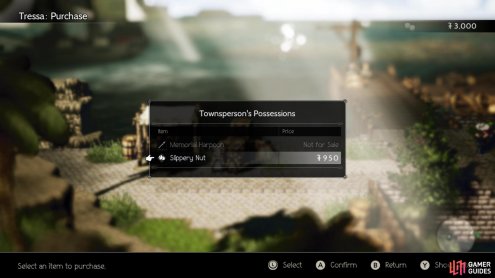 For the time being, most of the good stuff is out of your price range, with Tressa’s mom and dad having some nice accessories (HP and SP restore after every action). Your objective right now is to get some wine, which can be purchased from the NPC with the green bubble in front of the tavern. Purchase the wine and some scenes will play out, with some pirates causing a ruckus and stealing your bottle of wine. Return to the docks for another scene and you will be able to purchase some stuff from the Captain’s merchants. The game will move on after buying the Sleepweed, so save that for last. Some more scenes will play out after that, then you’ll be back in the present, with Tressa now joining up with Cyrus. When you’re ready, take the western exit out of town.

Tip: Make sure you buy some equipment for Tressa before setting out for the Caves of Maiya.