Primrose's second chapter will take place in Stillsnow, which is found to the north of Flamesgrace. Surprisingly, considering the region and everything, it's probably shorter to go from S'warkii than to set out from Flamesgrace. Exit the town to North S'warkii Trail, then go west at the split to eventually get to West S'warkii Trail. In this area, go west at the first sign, then north at the second to find yourself in East Victors Hollow Trail. There will be another sign immediately upon entering, pointing to Stillsnow in the east. Just head straight east in Western Stillsnow Wilds and you will eventually come to Stillsnow.

Upon entering the town, the inn and shops will be right there, so feel free to browse to see if you can upgrade any equipment. Head inside the tavern next to find a chest in the northwest corner (Olive of Life). To the right of the tavern are some NPCs, two of which will start Side Stories, but ignore them for right now and Scrutinize/Inquire the NPC along the bottom of the map to get the Dragon of the Frostlands information (not used for any side stories here, but good to have). The person hiding behind the snowman not far off will unveil a hidden item on the map, so make sure you Scrutinize/Inquire him.

There's one more NPC to the right of the small house nearby, who has a Bishop's Hat for Purchase/Steal. Inside of the house is a woman who is holding the Forbidden Dagger. Remember you can only purchase these and the downside to this one is that it reduces fire and dark damage, which isn't too bad if you equip it to a character who isn't going to be dealing with those elements; it costs 72,000 Leaves, though. There's also a chest in the same house, holding a Shadow Soulstone (M). 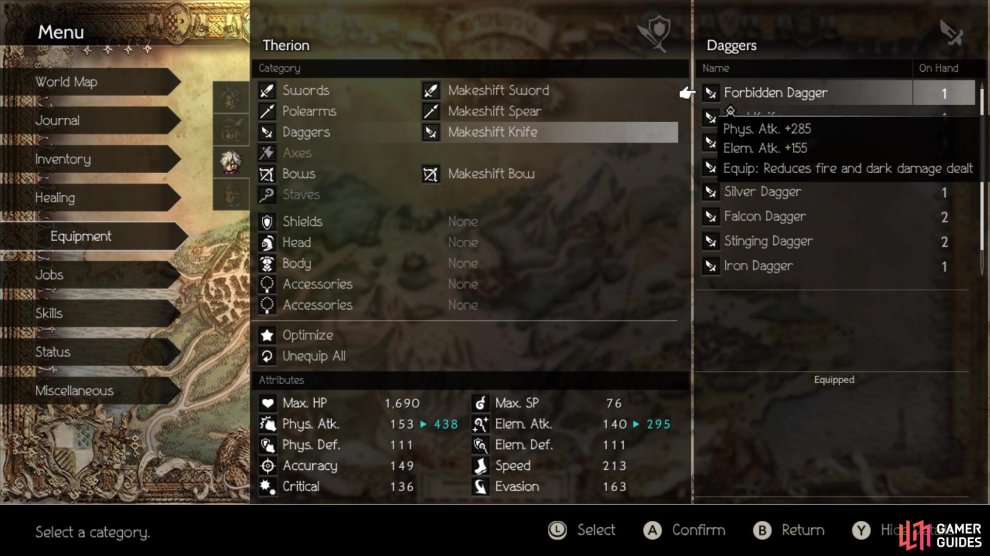 To get to the northern part of town, look for a path to the right of the shops. Enter the large building straight ahead to find another chest (Inspiriting Plum), then look inside the chapel next door for another (Healing Grape M). The cleric at the altar is holding a Jaguar Lance, which is a nice spear for right now. One final thing is that a NPC is blocking the door of the small house next to the chapel. Go ahead and defeat him in a duel (should be fairly easy with a strength of four), then enter it to find the hidden item pointed out earlier (Soul Bow). There is also a chest in the same house, which contains a Swordbreaker (it's a dagger).

Let There Be Warmth

There are three Side Stories in Stillsnow, all of which can actually be completed right now. Start off by heading inside of the tavern and speaking to the Ingenious Inventor there, who is working on a portable heat source. However, he is missing a few key components to make a functional prototype, particularly some coal, flax and a handy metal container. Luckily for you, all three items can be gotten from NPCs in Stillsnow by using Purchase or Steal. Head to the entrance of the village and the villager there will have Adequate Flax. Remember that NPC hiding behind a snowman? He'll have a Portable Pot. For the coal, head to the northwestern exit, where you'll find a NPC with some Satisfactory Coal. Bring all three items back to the inventor to finish.

On the right side of the tavern, you will find Miles standing behind a torch, so speak to him to begin this side story. Miles realizes he still has a long way to go as a swordsman, so he proposes a little duel. Naturally, you need to either Challenge or Provoke him, which shouldn't be too tough, as Miles has a strength of four. He is weak to spears, so if you use H'aanit, then Linde will be sufficient enough to break him; follow up with another summon to deal more damage. Upon defeating him, watch the scene after and then the quest will end.

The final Side Story here begins from the woman in front of the tavern. She wishes to leave the village and become a singer, but her family's debts is preventing this from happening. There are two ways to complete this quest, with the first being to find her father. He is located inside of the tavern and you need to Provoke/Challenge him. He is an easy fight, as he only has a strength of two, so upon defeating him, you will finish the quest. 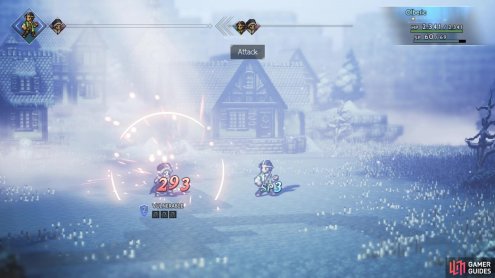 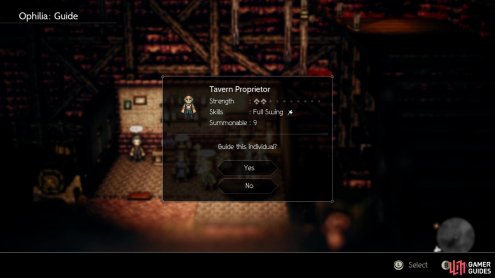 The other method to finishing this Side Story involves travelling back to Quarrycrest. Once you get there, head into the tavern, which is the northern area. There is an older man on the right, the Tavern Proprietor, who is looking for another singer. Use either Ophilia or Primrose to Guide/Allure him into following, then return to the woman in Stillsnow to finish the quest.

When you're ready to continue carrying on with the game, go to the tavern and start Primrose's second chapter. She has finally arrived in Stillsnow, where the map she had gotten from her former master, Helgenish, lead her. Without a real lead as to where her target is, Primrose decides to ask some villagers. Head to the tavern to view a scene, where Primrose thinks dancing on the stage will loosen lips, but it does not. However, she meets a former servant to House Azelhart, Arianna.

Arianna seems to know the place marked on the map, as well as the man Primrose is searching for most likely, but is too afraid to speak. Once you regain control, head on over to the small house on the eastern edge of town. Enter it for a scene, where Primrose puts together a plan, with Arianna agreeing to it. When you're ready, speak to Arianna out front with the green marker and select "yes" to wait until the carriage arrives. However, there is a snag in her plan, as the driver of the carriage is not convinced, no matter how much Primrose insists.

So, it looks like you'll need to Allure someone that can convince Oren to take you in the carriage. Speak to Arianna to learn that Oren owes the tavern keeper a debt, so head on over there. Yes, this is the same guy who allows you to change your party members, so Allure him and head back to Oren. He will have some words with Oren and get you onto the carriage. Make your preparations, then talk with Oren again to tell him you're ready to go.

Some scenes later, you will arrive at your destination, the Obsidian Parlor. Rather than go through the manor itself, Arianna suggests going through a nearby cave. When you regain control, look to the south of the save point to find a chest at the bottom of a small hill (Herb of Revival). Now, head all the way to the west, towards the town icon on your minimap, and you will find another chest just before the exit back to Stillsnow (Ice Soulstone M). There is one final chest, a purple one at that, to the left of the gate the leads into the manor (Dark Amulet). When you're ready, enter the cave to the right of the save point.

Tip: Make it a point to return to town and Allure someone with Primrose. One good choice is the Carefree Man to the right of the tavern with Mental Augmentation. 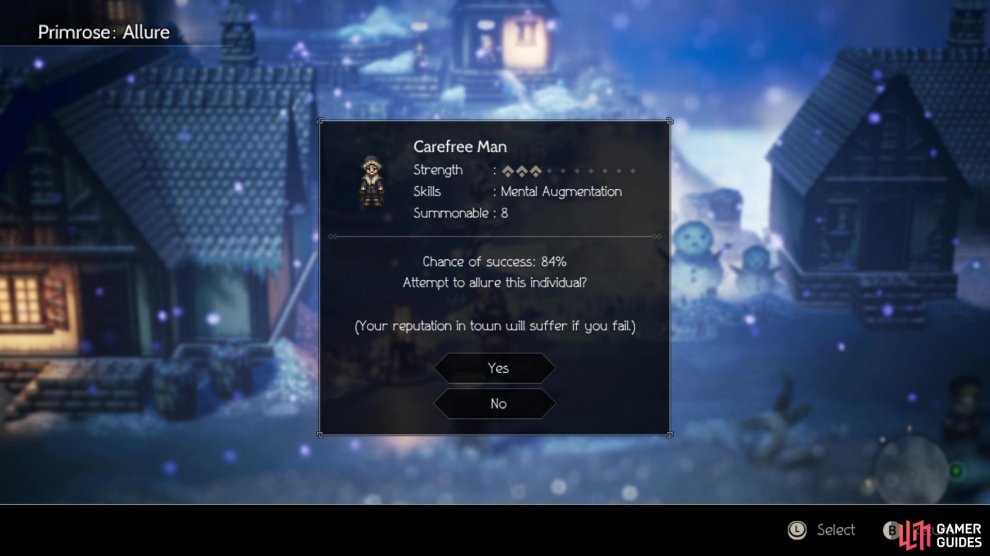 There are three paths ahead of you at the beginning of this dungeon, a top, a middle and a bottom one. The bottom one will lead to a dead end with a chest, so go on that one first (Herb of Revival). Take the middle path now as it heads east to another split. Once again, go south to find another chest waiting for you (Shadow Soulstone M), then look above to see a chest at the dead end to the east (Inspiriting Plum M). Climb the stairs to your left and approach the split near the bridge to see a scene taking place elsewhere.

Cross the bridge and venture south, where a semi-secret path will lead to a chest with some money (5,500 Leaves). Head north now, past the bridge and down the stairs to open the chest there (Energizing Pomegranate M). Return to the west, across the bridge, and journey north of the save point. Down the stairs just past there will be a purple chest, which contains a Spiked Vest. To the west will be a few ways to go, so start with the stairs leading down to the south for a chest (Healing Grape Bunch), then take the trail just north of there doubling back to the east for another chest (Wakeful Stone). The final path will bring you to the Obsidian Parlor. Enter through the doorway next to the save to find your next boss.

It seems a boss in this game can't come without some cronies of his own, as Rufus is accompanied by two Obsidian Associates. This battle will be purely physical, from the enemy's point of view, as Rufus and his minions stick to those kinds of attacks. Naturally, you will want to get rid of the Associates, who are weak to daggers, axes, ice and wind. They have their normal attack, Quick Strike (damage to entire party), Exploit Weakness (only hits a single target) and Wild Toss (ok damage with up to six hits to random targets).

They don't have much in the way of shields or health, so they should go down quickly. That'll leave Rufus alone, so start working on his shields, which you can reduce by using spears, staves, lightning and light. As for his attacks, other than his normal one, he has Pummel, which hits a single character twice and can inflict Unconscious. Roundhouse Kick will hit all of your characters for decent damage. Whenever you see Rufus take a deep breath, he'll gain the familiar dark aura and will follow this with Left-Hand Man on his next attack. 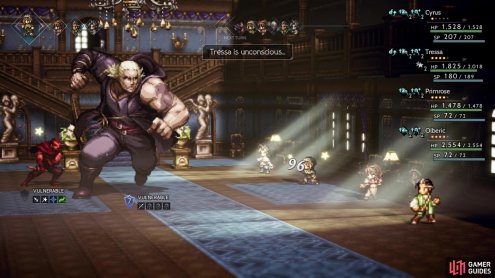 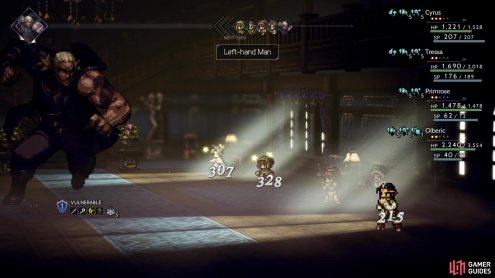 His ultimate attack can deal some good damage to your entire party and also inflict Unconscious, so quickly heal anyone with it. Note that Rufus can bring back the Associates with a call for help, but they return with half health and one less shield, so they will be easy to dispatch. Overall, this is a pretty simple fight and one that might be quite easy if you do it as a later Chapter 2 story.

With one of the three down, you will be heading to your hometown next, Noblecourt, as mentioned by Rufus before expiring. Some more scenes will follow and that'll bring an end to Primrose's second chapter.