Therion’s second chapter will have you travelling to Noblecourt, which is northeast of Atlasdam and Flamesgrace. If you have not been there yet, and you should have visited because of its close proximity to the Shrine of the Sage, start out at Atlasdam. From there, travel to East Atlasdam Flats, then to North Atlasdam Flats. Go northeast to Western Noblecourt Flats and you can simply journey a little more east to Noblecourt.

Like with the other Chapter 2 towns, Noblecourt is split into an eastern and western half. Before doing any stealing with Therion, head into the eastern half of the town and look for a NPC with a green hat on the eastern end. Scrutinize this guy to up your stealing percentage, which should help a little bit in getting the rarer items. Return to the western half and let’s begin exploring. There’s a lady not too far from the main entrance to the town that has a Soul Knife, which has a very high Elemental Attack stat on it. The boy next to her has an Empowering Bracelet, which boosts a character’s HP by 500. 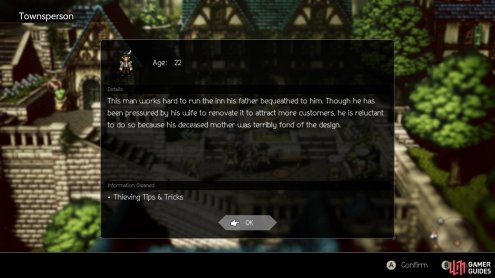 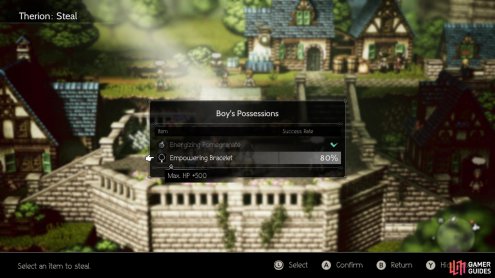 Down the stairs a little east of those people is an elderly woman blocking the entrance to a house. If you check out here wares, you see a nice piece of armor called Sorcerer’s Robe. While this has a very low chance for pilfering it, the robe is a great piece of armor and should be gotten (restoring your reputation in Noblecourt costs 2,500 Leaves). You can also Provoke the woman (she has a strength of 6), but know she can be a challenging fight, because she has access to Fire Storm and Ignis Ardere, fire spells that hit two and three times, respectively. Inside of the house is a purple chest that contains 10,000 Leaves.

There’s a NPC inside of the other house being blocked, but that one doesn’t have anything worthwhile. At the northern part of this section of town, there is the Provisioner and a save point, as well as a house to the west that you can’t approach yet. There is also a Side Story that can be started on the bridge that connects to East Noblecourt, titled [In Search of Father (I)]. You will be getting to this in a little bit, so just enter East Noblecourt for now.

In the tavern, you will find that two of the NPCs that you can Inquire/Scrutinize will give you some new stuff for sale in the equipment shop and a discount at the inn. The one patron has an Imperial Vest for Purchase/Steal, which has some good stats on it. There is another NPC standing at the bottom of the stairs just east of the tavern that has Elemental Heavy Armor on him, so steal that if you can. That’s about it for exploring the town, other than checking out the equipment shop, if you want. It’s time to move onto the Side Stories, of which there are four in the entirety of Noblecourt, but only three will be completed right now.

In Search of Father (I)

Kit, who you gave the Healing Grape to back at the beginning of the game, is on a search for her father, but has gone as far as he can right now. It seems like he is looking for a band of adventurers to join, so head to the tavern and get either Ophilia or Primrose for this quest. Head into East Noblecourt and just down the stairs in front of the tavern is a NPC named Aspiring Actor. Either Guide/Allure him and bring him back to Kit to finish the quest.

In the graveyard of East Noblecourt is a gravekeeper that is having problems keeping a troublemaker away from the place. If only he could find a way to keep the grave robbers away, as he isn’t as young as he once was. Return to the western side of Noblecourt and in the southeast corner is a NPC named Accomplished Graybeard that has a Codger-friendly Bow for Purchase/Steal. Use Therion or Tressa to acquire this item, then give it to the gravekeeper to complete this side story. 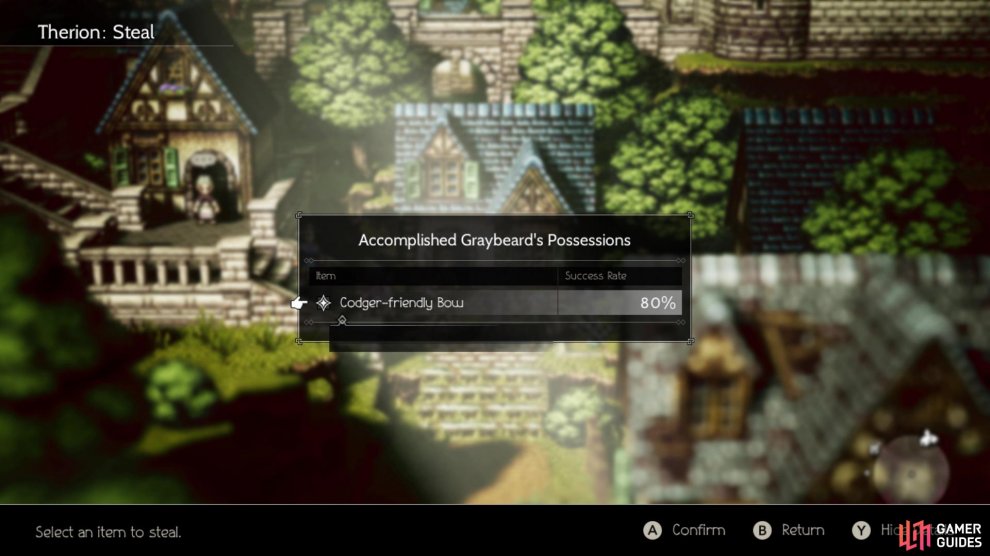 There is another solution for this Side Story, which will involve you having either Olberic or H’aanit in your active party. Leave Noblecourt via the normal exit, to Western Noblecourt Flats, and right before the path leading to the Shrine of the Sage, you should see an NPC. Challenge/Provoke this NPC (strength of three, so not a hard fight at all) and upon defeating him, the quest will be over.

If you finished Theracio’s first quest in Atlasdam, then you will find him at the eastern end of East Noblecourt. He is continuing his journey to teach as many children as possible, like the ones next to him, but he is lacking the tools to do such a thing. For this side story, you will need either Tressa or Therion, and you will require a NPC called the Junk Collector. This NPC is rather hard to find, since he is slightly hidden by the surroundings in East Noblecourt. Just north of the tavern is a large mansion and if you look on the western side, you should see the Junk Collector standing in front of a window. Steal/Purchase the Tools of Learning, then bring them to Theracio to finish the quest.

With all of that out of the way, head to the tavern and start Therion’s second chapter. Therion overhears two townspeople talking about a creepy mansion in the northwest part of town, where some scholar named Orlick lives. Apparently, he spends all of his time locked in his study, looking at some shiny, red stone. This mansion is located in the northwestern corner of the western part of Noblecourt, so approach it for a scene, then it’s off to the tavern with you. Once again, you overhear some patrons speaking about Orlick and learn of a partner he had named Barham.

You will need to hunt down this Barham fellow, so return to the western section of Noblecourt and venture to the southeast corner to find a dilapidated building. Approach it to find Barham, who tells you how to enter Orlick’s mansion, but he will only hand over the password if you help him first. He needs some pure water from a Sunlands Merchant that comes into town, so head to the market area (near the entrance to the town) for a quick scene, then you can steal the Oasis Water from the merchant.

Bring this back to Barham and you will find out your password, or rather, not before you do another favor for him. This time, he needs a wyvern scale, so head into East Noblecourt and look for the merchant in the garden area of the large mansion. Steal the Wyvern Scale and return to Barham once more. Of course, Barham requires one last item, some kind of ore, so journey to the Provisioner to find one more merchant. Snatch the Crystal Ore and deliver it to Barham. He will finally tell you the password, as well as hand you over a key you need to use inside of the mansion. 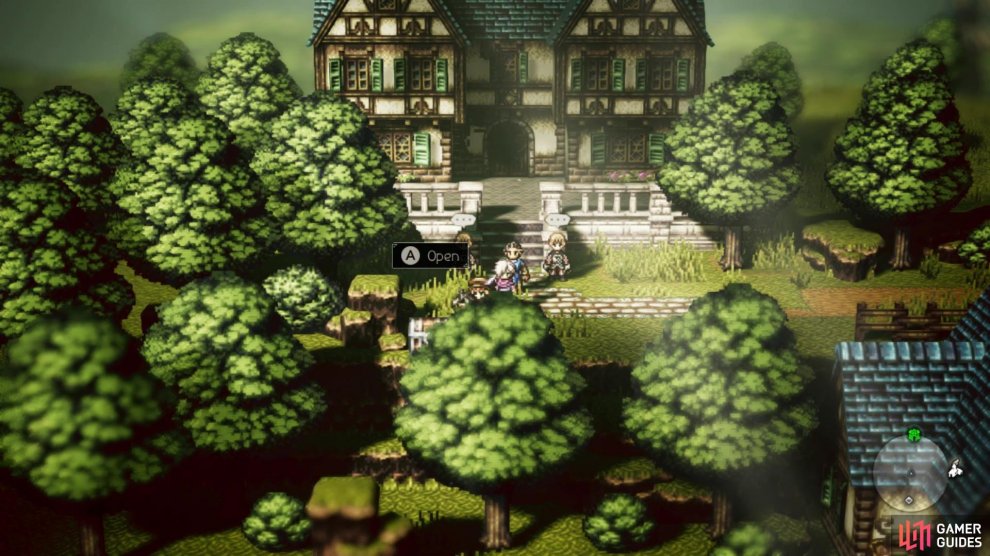 Head on over to the mansion now to be stopped by the guards outside, who will ask for the password. Therion gives it to them, allowing passage inside. Note that there is a chest with an Herb of Clamor in the southwest corner by the guards, which is only accessible upon starting Therion’s second chapter.

Orlick’s Manse is set up just a tiny bit differently than other dungeons, as it has some areas that are cut off from the others. Upon entering, head left to find a save point, some stairs and a door on the bottom floor. Go through the door for now and you’ll see a chest in the corner of the room, so open it for a Healing Grape Bunch. Climb the stairs and enter the room here for another chest, which contains a Light Soulstone (M). Return to the first area and climb the stairs, opening the chest to your left for 3,000 Leaves.

In the first room up here, there will be another chest, containing an Olive of Life. The next room to your right has yet another chest, so open it (Inspiriting Plum) and continue east, passing through the large doorway at the end. Don’t worry about any of the rooms on the second floor here and just continue to the right, where there will be some stairs at the end. Ignore them right now and enter the room across from them to find nothing. If you look closely, though, there is an opening towards the upper left, bringing you to another room that has a purple chest (Lightning Amulet)

Back outside, descend the stairs and open the chest behind the larger table for a Refreshing Jam. Exit to the south to come across a save point and a locked door. Approach it for a quick scene, then enter the room beyond to find the Ruby Dragonstone. When you get close enough, a scene will take over and a boss fight ensues.

Orlick comes with two bodyguards, who will be protecting his weaknesses. Thus, you will need to defeat both of them before you are able to bring down his shields, although you can guess his vulnerabilities while he’s guarded. As for the bodyguards, they only attack physically, with two attacks being single target and one randomly attacking up to four times. They are weak to swords, staves, ice and darkness, so use those to break them and quickly take them out, as Orlick will be pelting you with his attacks while they’re still alive.

Orlick only has a few attacks in his arsenal, like his normal attack and Magic Missile, which hits one ally for decent magic damage. There is also Rage, which hits your entire party for physical damage. Lastly, you will see him cast Augmentation, a skill that increases both the physical and elemental attack of himself and any other foes on the field. This can be a fairly bad thing, as the increase in damage can cause problems. The fight will continue as above until you get Orlick to half health, after which, he will use Activate Construct to summon a golem. 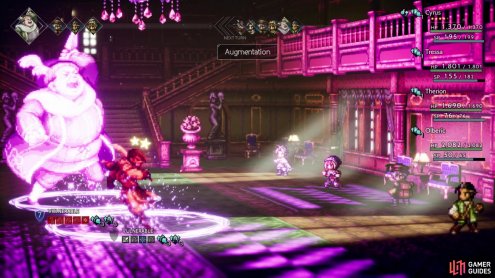 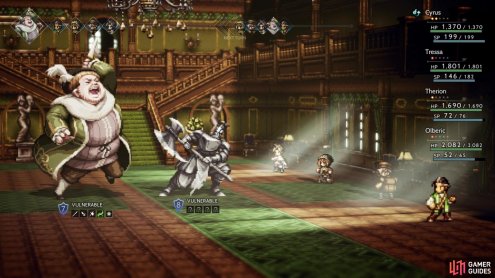 Summoning his golem will also cause Orlick to channel his arcane energies, which will spawn the familiar dark aura. This will be followed up on his next turn with Magic Grenade, a magical attack that deals some big damage to everyone. The best thing to do is keep a few shields around until he summons his golem, then break him before has a chance to pull off the above attack. The golem doesn’t do much, as its physical attacks only hit a single character, but it can use Lightning Bolt to deal lightning damage to the entire party. It is weak to daggers, bows, fire and wind. Orlick, himself, is weak to spears, daggers, axes, wind and light. Note that Orlick can waste a turn trying to summon another golem, as he can only do it once.

With Orlick knocked unconscious, Therion snags the Ruby Dragonstone and returns all the way to Bolderfall to give it back to Miss Ravus. After some banter back and forth between the group, Therion finds out that his next destination is Wellspring and is surprised that Heathcote knows about the Black Market. Thus, the end of Therion’s second chapter has been reached.