For H’aanit’s third chapter, you will be visiting Stillsnow again, which is found north of Flamesgrace. After finding that her master had been turned to stone, she visits Stillsnow in the hopes of Susanna having a cure for the petrification. Upon entering the town, there will be a scene with some kids playing with Linde, then you’ll be directed to the house with the red roof to the north. When you approach, there will be another scene or two, then you’ll be forced to use Provoke on Alaic, the man standing in front of Susanna’s house.

Alaic has a strength of six and is fairly straightforward, as the majority of his attacks are standard physical fare. The only trick up his sleeve is Panic Slash, which can inflict Confusion. This means that H’aanit can hit herself with an attack, but this will knock some sense back into her. Being weak to swords, you can simply break Alaic with Linde, then use a stronger monster (boosted) to deal damage. Upon beating Alaic, you’ll get to meet Susanna and there will be a lot of talking. 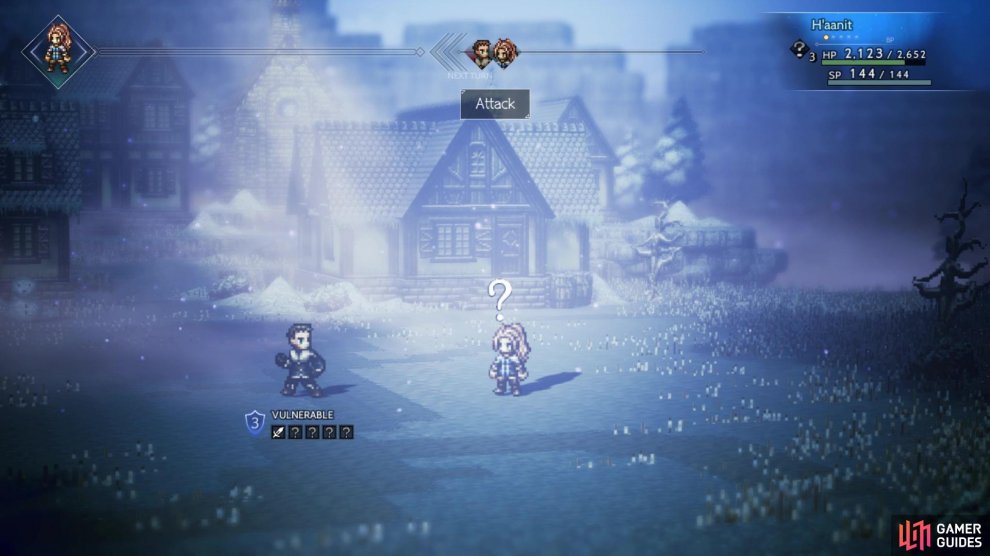 Susanna mentions that the only way to break the curse that was afflicted upon your master is to defeat Redeye. However, there is a way to protect yourself from Redeye’s power. You will need to acquire some herb-of-grace, a plant that grows in the forest nearby (conveniently). Your goal is to now go to the forest, the Whitewood, and grab some herb-of-grace. upon regaining control, make sure you heal up after the previous duel and take the exit next to Susanna’s house.

Trail to the Whitewood

It might be a little difficult to see with the snowstorm going on, but follow the trail in front of you until you cross the bridge, then head south a bit to find a chest (Olive of Life M). Continue along the path and just before the second bridge, there will be a chest nestled in the little corner there (Inspiriting Plum Basket). Cross the second bridge and make your way to the end, where Alaic is waiting for you to show the trail leading to the Whitewood.

Immediately upon entering, look to your left to spot a purple chest, which will contain 15,000 Leaves. Return to the main trail and follow it east, then as it curves north, keep going north to find a dead end with another chest (Olive of Life L). Continue west, keeping on the lower path, until it curves around to another chest (Healing Grape Bunch). Back on the main path, you will shortly come to another split, with one way heading north and another to the east. Go north first and open the chest (Shadow Soulstone M), then venture east a little bit until you can reach the chest to the south (Inspiriting Plum Basket). There will be one final chest on the eastern side of the map, in plain view, so grab it (Rock Cleaver) and get to the end, to the save point. Enter the clearing to face your next boss.

The Dragon can be an annoying boss, as it will block three of its five weaknesses at the beginning of the battle, then follow it up by making it so it can act twice per turn. On its first actual turn, the Dragon will use Swept Away to remove one character from the battle. Thankfully, this isn’t permanent, as the character will return in a few turns. However, this could potentially be devastating for your team, as he could take away someone like your healer, so hopefully you have quite a few items in your inventory as backup.

Another attack from the boss includes Dragonfire, a magical attack that hits everyone for absolutely major damage, with the possibility of KOing characters with lower health pools. One clever trick to minimizing the damage from Dragonfire is to use the Cleric’s Reflective Veil, which will actually reflect the damage back at the Dragon. The only downside to this is that you can only buff one person at a time. You will also see Rending Claw, a single-target physical attack that will do large damage. Should you happen to have the Dancer’s Divine Skill, Sealticge’s Seduction, then you can cast that on your Cleric and use Reflective Veil on your entire party. 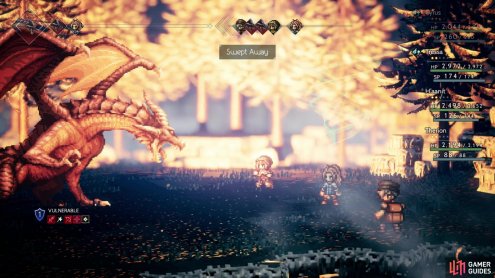 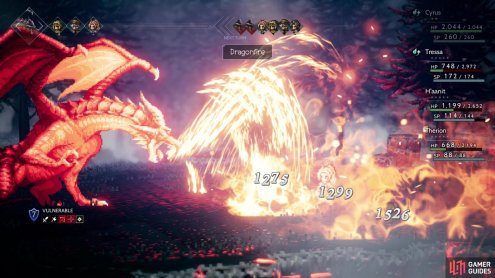 At the beginning of the fight, use its available weaknesses (axe and light) to whittle its shields and break it. Upon recovering, the Dragon will gain three shields, but unlock one of its weaknesses (swords). On the second recovery, it will max out at ten shields and finally unlock the final two weaknesses (bows and ice). You might also see the Dragon use Sweeping Storm at low health, which removes two characters from the battle, but only for a single turn. Depending on your damage, though, you might not even see this at all. Healing Grape Bunches, a Cleric or Alfyn with Concoct are all good choices to outheal Dragonfire.

With the Dragon defeated, H’aanit collects some Herb-of-Grace and exits the forest. Return to Susanna’s house for some more scenes and you will actually obtain some Herb-of-grace items. That is your cue to leave the town and upon doing so, one final scene will occur, bringing H’aanit’s third chapter to a close.