Primrose’s third chapter takes place in Noblecourt, her hometown, so teleport there and begin by visiting the tavern, as usual. Seeking the remaining two with the marks, she was told to return home to Noblecourt to "find the truth." It doesn’t take long to see that something is wrong, as a man is murdered in the square. While the scene happens, Primrose recognizes one of the men in the upper portion as a friend of her father’s. After some lengthy cutscenes, you will regain control, although only for a little bit.

You’ll be in the eastern part of town, so head down the stairs for another scene. Primrose runs into Revello Forsythe, the man she recognized earlier. After House Azelhart fell, a group called the Obsidians took over the town, with Revello telling Primrose all of the happenings. He will take you to where the Obsidians are located, so prepare and then speak with him once you are ready. This will automatically put you into the next dungeon, but you are free to leave anytime you want.

In fact, you will want to leave to do a few things. The first thing you want to do is Allure someone with Primrose, who isn’t restricted by the level requirement like Ophilia. Two potential candidates are the guards in front of Orlick’s Manse in the southern area of town. The one on the right has Steel Defenses, while the left guard has Improved Offense, both of which are great skills. You will also want to purchase a bunch of Herbs of Light from the provisioner, as they will be needed for the boss. When you’re finally ready, go ahead and enter Obsidian’s Manse. 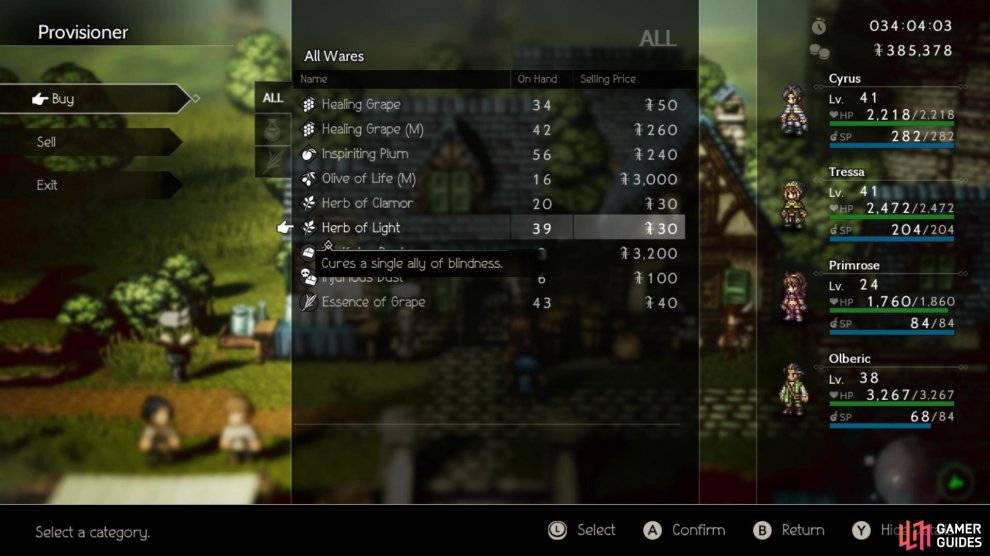 There are some stairs immediately to your left upon entering, but don’t go up them yet. To the left will be a chest that contains a Healing Grape Bunch. Climb the stairs and enter the first room at the top to find nothing, but if you examine the right side of the room, you will find a hidden doorway. Pass through the next room and in the one beyond, there will be a purple chest (Elemental Hat). Return back to the top of the stairs and enter the second room upstairs, opening the chest in the upper left corner (5,000 Leaves).

Exit to the southwest and descend the stairs, going to the left at the bottom to find a chest in the corner (Inspiriting Plum Basket). Return upstairs and head west, finding a save point on the way, and look for another hidden doorway to the right of the large doorway, where a chest will be waiting (Antidote Stone). The large doorway will lead you to a second part of the dungeon. Ignore the stairs to the north and climb the ones to your right. You’ll spot a chest while venturing east, so head in that direction and grab the Energizing Pomegranate (M) from it.

An open area will be to your right, so journey in that direction to find a chest behind the bar (Olive of Life L), as well as some stairs in the upper right corner. To the left of the stairs are some barrels and to the left of that is another hidden doorway, leading to a chest (Silver-filled Pouch). Climb the stairs, ignoring the small doorways, and head to the end of the path to find one last chest (Inspiriting Plum M). Retrace your steps to the save point, heal up, then enter the large doorway to find your next boss. 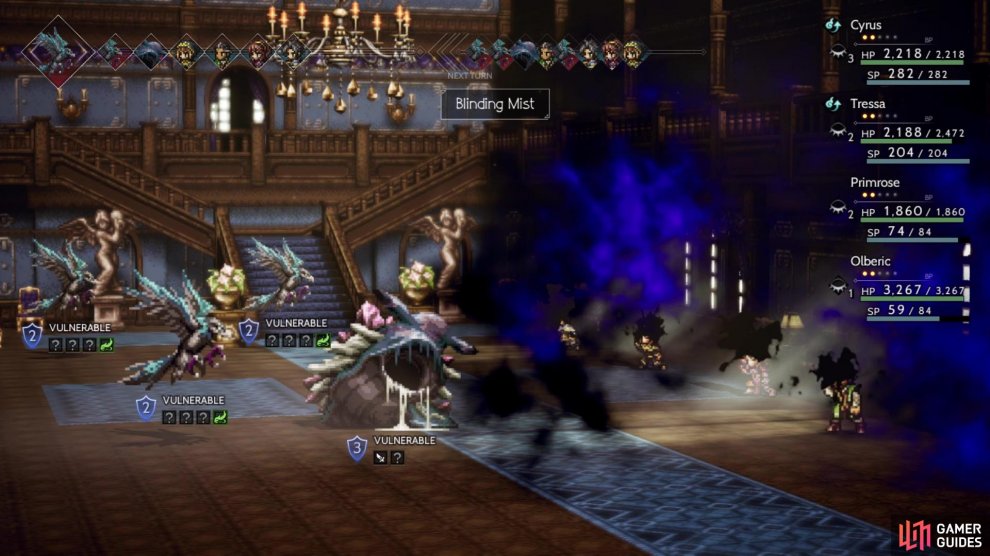 Albus can be a challenging fight, as his one skill will likely inflict Blindness on whoever it hits, which is why those Herbs of Light were bought before entering the manse. He begins out rather simply, sticking to mostly single-target physical attacks. Shoulder Smash does some big damage and will lower the target’s physical attack, while Eye Gouge does around the same damage and will inflict Blindness. The only multi-target attack you’ll see from Albus for the majority of the fight is Flay Skin, which are random attacks that will strike from four to six times for average damage. He is weak to swords, daggers, bows, wind and light, and doesn’t change them at all throughout the fight.

Albus has eight shields at the beginning of the battle and will not gain anymore, so you don’t have to worry about that. He is weak to swords, dagger, bows, wind and light. At around 75% health or so, Albus will use a skill that will grant him two actions per turn, which will step up the battle a little bit. When his HP reaches 50%, he will use Human Shield to summon two Obsidian Officers, while also blocking his weaknesses. Of course, that means you will need to get rid of the Officers before you can begin depleting Albus’ shields again.

It should be noted that the Officers have a unique piece of equipment that can’t be gotten anywhere else in the game, so make sure you have a Thief in the battle to steal the Obsidian Garb. It might not be the best piece of armor, but if you’re one of those people who want everything, then this is your only chance. The Officers are weak to spears, axes, fire and lightning and with how strong your party should be at this point, it shouldn’t take too long to get rid of them. All of their attacks are single-target physical attacks, with the only noteworthy one being Eye Poke, as it can inflict Blindness. He can only summon them once and will likely waste an action trying to bring them back.

At the same health range (50%) is when Albus can enter boost mode, gaining the familiar dark aura. He’ll follow this up with Eye Slash, which is basically a party-wide version of Eye Gouge, as it does about the same damage and can inflict Blindness. You will want to cure Blindness as soon as possible, as Albus can use Death to the Unseeing to instantly KO anyone who has it on them. Since you don’t have to worry about any other debuff than to physical attack, use Hired Help’s mercenaries to boost your physical defense in conjunction with the Thief’s Shackle Foe to mitigate the damage you receive. Outside of his Blindness thing, Albus isn’t too difficult of a boss. 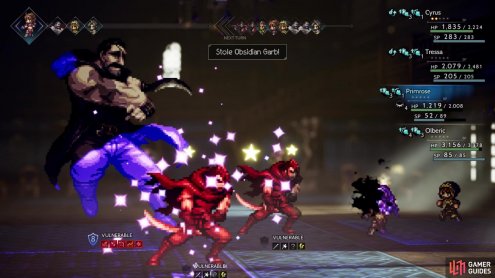 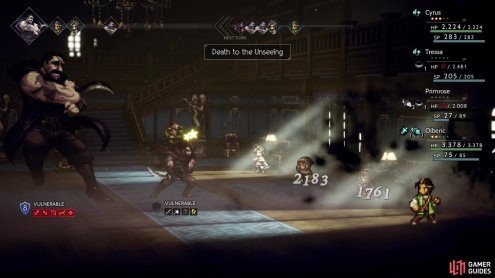 When you’ve finished off Albus, the true leader of the "crows" will reveal himself and leave Primrose in a dangerous situation. With Revello’s help, though, Primrose recovers and finds out the location her final enemy will be going to, which is Everhold. This will bring an end to Primrose’s third chapter.