Tressa's third chapter begins in Victors Hollow, which you have visited earlier, so fast travel there and head to the tavern to start this story.

Tressa plans on attending the Merchants' Fair in Grandport, but before she goes there, she visits Victors Hollow to find something to present at the fair. While exploring the town, something catches her eye at one of the stands, which turns out to be a treasure map from a notorious pirate. Knowing this, the merchant snags it back and you'll regain control. Approach the entrance to the tavern and a familiar face will show up, or rather some familiar faces. After some catching up, Tressa leads Leon to the map of his former friend. 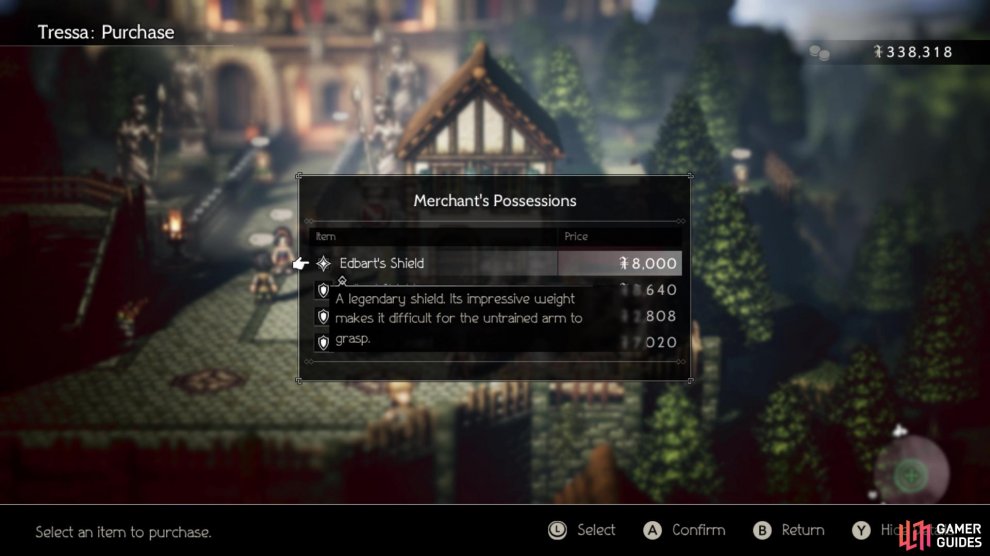 Thinking Leon will purchase the map from the merchant, he walks away and Tressa gets it in her mind to do the trade for the map herself. Make your way to the northern part of town, where you'll find a merchant in front of the equipment shop. Browse his items with Purchase to find Edbart's Shield, which is the very shield that the merchant with Baltazar's map wanted. Buy it and return to the merchant, handing over the shield to acquire the map from him. Bring the map to the tavern to watch some scenes. This will eventually lead Tressa to go after the gem that the map leads to, which is somehow located in a nearby dungeon. This is where you will be going next, so get ready and take the exit to the west of the tavern.

Path to the Forgotten Grotto

Head west immediately, ignoring the northern path, and you will find a chest at the dead end (Olive of Life). Now, head north, bypassing the bridge and at the end, you will find another chest (Shadow Soulstone M). Cross the bridge and follow the trail until you make your way over a second bridge, where you'll find a save point to your left. If you continue right from here, you will find another chest at a dead end (Healing Grape M). The exit to the Forgotten Grotto is located east of the save point.

Once inside of the grotto, follow the trail until you see chests above you, so go ahead and open those for an Herb of Light and a Healing Grape Bunch. Go south a little bit and you should notice a path leading to the west, with some rocks covering it. Take this path to another chest, which contains an Inspiriting Plum Basket. Continue along the main path until you come across a save point, so make use of it. West of the save point, you can go north to another dead end with a chest (Energizing Pomegranate L).

South of that passage is where you will dive deeper into the dungeon. Not even a few steps pass by where you'll see another split, with the right leading to a dead end with a purple chest (Sledgehammer). Continue west, across some a pier of sorts, then look to the left for a chest (Olive of Life M). You should have glanced at a chest as you came to this part, which is to the right before the top path (15,000 Leaves). The last chest in this dungeon is located to the right of the save point, on a long trail (Vivifying Stone). All that's left is to head for the clearing past the save point, where you'll encounter a boss.

From the name alone, you can guess that this boss will be centered around poison, and you would be right. At the beginning of the battle, the boss will conjure up a pool of poison, making it so any attack he does can inflict poison on the character it hits. Additionally, the beast will make it so it will be able to perform two actions per turn. Because of this, though, you should be able to get some free hits on him, depending on the turn order. The Venomtooth Tiger is weak to spears, bows, fire and light, so hopefully you can break him before he manages to scrounge up another turn.

Of course, you're not going to be able to defeat the beast before he gets another action, though, so you'll want to prepare a bit. As already mentioned, he can inflict poison with any of its attacks, which is a problem considering that Sweep will hit the entire party. In fact, other than Sweep and his normal attack, the Tiger doesn't seem to use anything else for the majority of the battle. Upon recovering from a break, the Tiger will "steel its defenses" and gain an additional two shields, meaning it will max out at 10 shields after doing this twice. 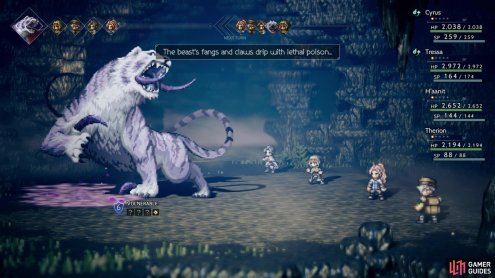 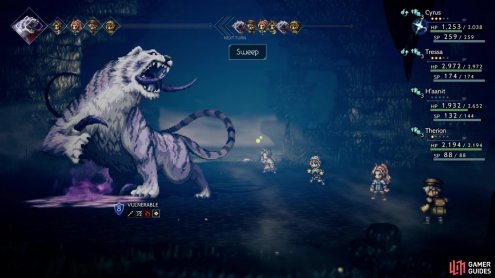 Other attacks include Tail Sweep, which hits the entire party twice for moderate damage each hit, and Venom Fang, a skill that does major damage to a single character. At 50% HP, the Venomtooth Tiger will use Peerless Poison to create some sort of hazy effect around the edges of the screen. This doesn't do anything directly, but any character that is under the effect of poison will lose SP and BP as well. Needless to say, you will want to make sure no characters have poison on them for very long.

Outside of Tail Sweep and Venom Fang, the other attacks from this boss are nothing to really worry about. You can use the Thief's Shackle Foe to reduce his physical attack, while increasing your party's physical defense with the Mercenaries from Hired Help. If you use Alfyn, his Concoct talent comes as super helpful in dealing with the poison; otherwise, you'll need to use Herbs of Healing or something like the Merchant's Rest to cure that character of it.

With the Venomtooth Tiger down for good, Tressa will grab the treasure, which just happens to be the eldrite mentioned earlier. Return to the tavern for a scene, then that will bring an end to Tressa's third chapter.