You should be well-prepared now for the final chapters of the characters’ stories, so begin by teleporting to Duskbarrow. Head to the tavern and begin Cyrus’ final chapter. Cyrus’ leads has lead him to Duskbarrow, where he ponders that a secret lab of some kind must be present in the town. While looking around, he spots Lucia, the headmaster’s assistant, so he decides to follow up. Approach the stone doors at the northern end to not find Lucia, but he does find a button. Choose to press it to have nothing happen, which is a bit of a conundrum.

Instead, choose to not press it to have the option to pull it come up. Doing this doesn’t do anything either, so pick to not do that to have a few more options appear. You will want to twist the button to open up the stone doors, which will lead you to the Ruins of Eld, the dungeon for Cyrus’ chapter. 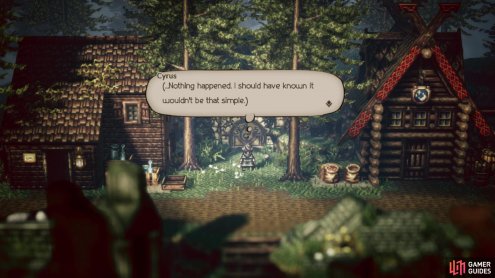 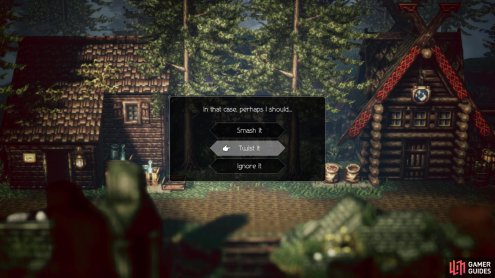 Head west at the beginning, bypassing the two rooms, as they have nothing. Just past the second room is some stairs, so go up them and hug the western wall as you continue north, pressing right while doing so. If successful, you should discover a secret path, which leads to a purple chest that contains a Rune Bow. Return to the main path and go north, stopping by the room on the left for a Refreshing Jam. Although it’s hard to see because of the sunlight, there is another chest to your north, in the sunlight (20,000 Leaves).

From the previous chest, travel west and south, down a bunch of stairs, and into a new area. The only thing you will find in this area is a purple chest that holds 50,000 Leaves. Double all the way back to the first money chest and go southeast to find some stairs, leading down to another chest (Shadow Soulstone L). Make your way to the trail above the chest, keeping to the east, where you will come to a mural on the wall, triggering a scene. Once you regain control, look to the left of the main part of the mural to spy a chest hidden behind a fallen pillar (Vivifying Stone).

Continue east, past the save point and down the stairs beyond it. This leads to another area, where you can find a Void Amulet in the chest that’s inside of the small room. That’s all you will find here, so return to the save point and pass through the door, to another new area. Straight north will be a chest (Healing Grape Bunch) and another chest will be in the opening to the left of the previous one (Energizing Pomegranate L). West of that will be a library, where Cyrus will take over and find a bunch of supposedly lost tomes. 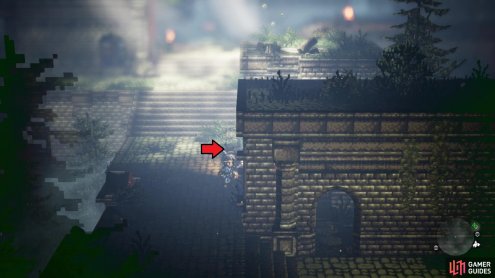 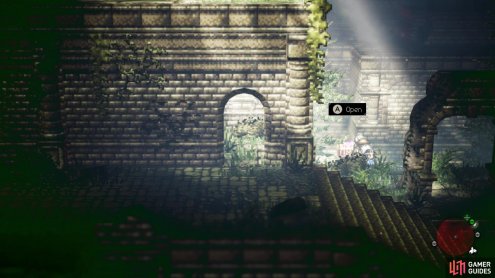 If only you could read some of these books, but you cannot. Up the stairs and to the left will be an exit from this library, so take it, descend the stairs beyond and open the chest to your right (Ice Soulstone L). South of that will be another chest (Knight’s Shield), and the rest of the dungeon is nothing but a short trot to a save point and the boss.

Lucia begins the battle by having two actions per turn, which can be pretty brutal with the damage she can do. On her first action, she’ll use Physical Perfection, granting her five weaknesses and a whopping 30 shields. On her second action, she will likely do something like Sweep to hit all of your characters for fairly high damage. Now, Lucia has multiple phases, with the first one being the physical. In addition to Sweep, Lucia can also do Wallop, a big damage attack that can inflict Unconscious. One other move she can do is Pulverize, dealing major damage to a single target and also draining their BP. Her first phase is weak to swords, spears, daggers, axes and bows.

The strategy for the first phase is to use multi-hit moves like Rain of Arrows and Thousand Spears to whittle down her shields, since they are guaranteed to hit at least three times. While doing this, up your physical defense with the mercenaries from Hired Help, while dropping her physical attack with the Thief’s Shackle Foe. This will make her damage much more manageable, especially if she likes using Sweep a lot. Eventually, the shields will go down and you will have the chance to lay on the damage, so do just that.

When Lucia recovers, the second phase will begin, with her shields being cut in half to 15. She also changes her weaknesses, opting for five new ones. In fact, all of the weaknesses are elemental, with them being fire, ice, lightning, wind and light. Lucia also changes up her attacks, choosing some elemental attacks. Shatter Soul deals big physical damage to a single character, with some of the damage being applied to your SP, too. Shadow Slash deals big dark elemental damage to a single character, plus it may inflict Silence. Hellfire does good dark elemental damage to all characters. 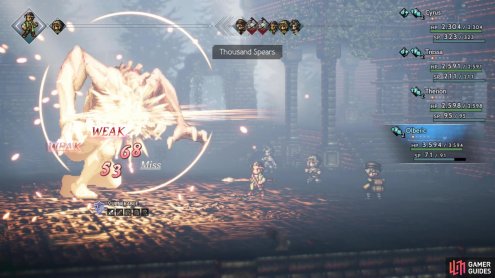 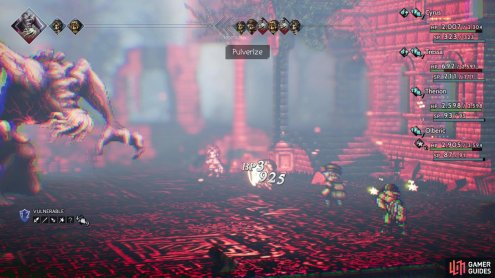 Upon breaking her shields and Lucia recovering, her shields will reduce to 8, which is the final amount. Her weaknesses also change yet again, going down to four and becoming swords, axes, lightning and light. She’ll gain another action per turn and add even more attacks to her repertoire. Berserk Rage deals pretty good physical damage to characters randomly, around five or so times. Rampage is similar, but it only hits two to four times. She can also heal herself, but it’s such a minute amount (less than 2,000 HP) that it shouldn’t matter. The worst thing is that she can enter boost mode, following this up with Almighty Curse, an attack that reduces your party’s HP to 1. Hopefully Almighty Blow isn’t followed by something that hits your party, as this will be a game over.

If you can outheal the damage and cure the ailments when they pop up, this fight shouldn’t be too difficult for you. Once Lucia goes down, the story isn’t quite over yet. Return to the library you passed earlier and check out the bookshelf on the right to obtain the High Hornburgian Dictionary. You will now need to use Scrutinize on three specific spots, two of which are in the lower section of the current library, with the third back where you fought Lucia. Note that random encounters will still occur. Once you’ve done this, return to the mural in the previous area and Scrutinize that, which leads to some more questions.

Some more scenes will occur after you finish up at the ruins. If Cyrus was the character you picked at the very beginning of the game (it is according to this walkthrough), then you will bear witness to some credits. After the credits are over, you will return to Atlasdam, where you will regain control of your character. Note that if Cyrus was your initial character, you will finally be able to take him out of your party. Also, finishing Cyrus’ fourth chapter will unlock some new Side Stories out in the world. This is true for completing all Chapter 4 stories, with some Side Stories requiring more than one character’s story to be finished. 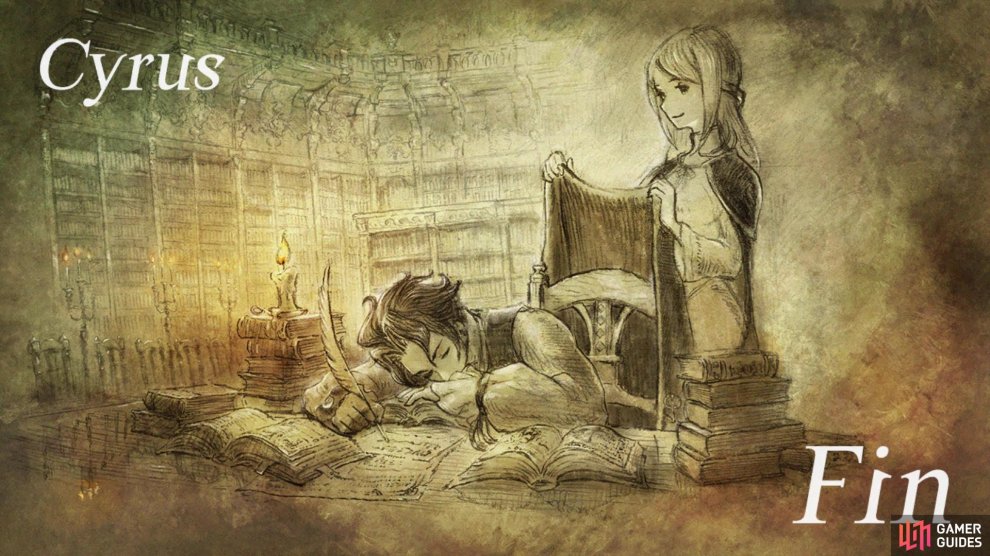