Ophilia's fourth chapter will begin in Wispermill, so place her in your party and fast travel to the town, which is located in the Flatlands. Make sure you equip her with good armor and weapons, as well as a subjob, then begin the story. Asking around about the Saviour, it seems the people of the village aren't too forthcoming with information, as they appear to be a little unwelcoming to anyone from the church. You'll soon regain control after speaking with the second villager, so head a little east for another scene, which will have Ophilia being captured.

You'll learn the true name of the Savior, who is an old face you will recognize. Stuck in a cell, there isn't much you can do besides walk around, so head towards the cell door to get a prompt to either look around more or wait and see what happens. Choose the second option to have someone help you escape, then exit the building and head west to view a scene, pinpoint the location of the Savior. The exit to the cave is located in the southeast corner of the village, so head over there to go to Ebony Grotto. 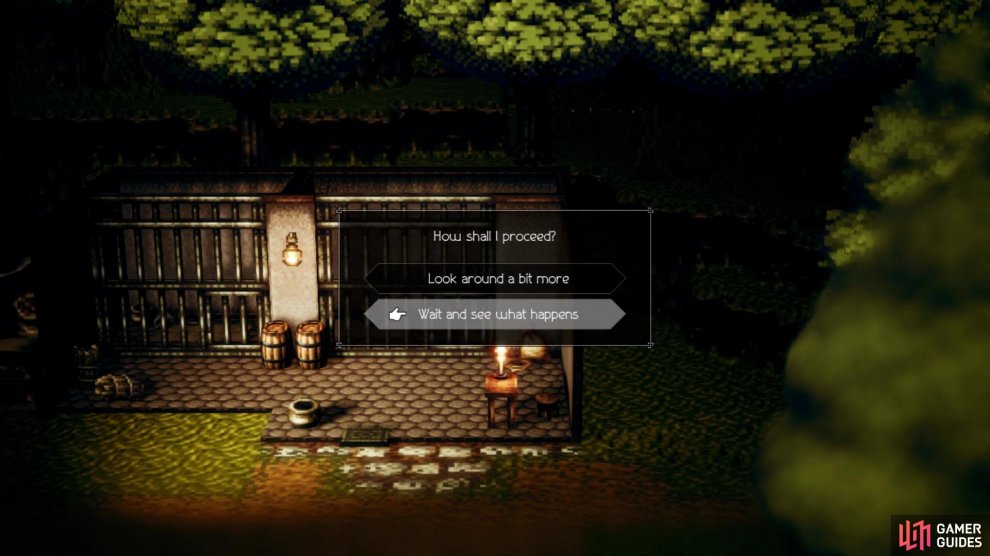 Immediately to your right upon entering the cave is a save point, so go there and then head straight north to find a chest all the way at the top (Olive of Life M). Return south a little bit and head east when you can, which will you to take the curvy path right there to loot the chest you saw at the beginning (Giant's Club). At the northern end of the map, continue east a little bit more and head south on the first path you see. You should be able to spot what looks like a stone arch to your east. Past underneath this arch, edging to the north a little bit, to find another chest (Energizing Pomegranate M).

Back on the main path, return to the northern edge and keep going east, following it as it curves south. When you notice a torch on your left side, you can step through that area to reach a chest (Refreshing Jam). Continue east, past the save point, and into a second new area for the dungeon. Straight away, there will be a chest waiting for you a little to the east (Healing Grape Bunch). There's another save point right next to this chest, so head east from there and south to a chest (Energizing Pomegranate M). At the save point, go north to the torch and then west to open the chest there (Inspiriting Plum M).

Continue north and when you spot the trail to the north, take it to reach the chest in the northwest corner of the map (Thunderstorm Amulet). Go back to the torch where you went north for the previous chest and head straight south now to find a hidden path to another chest (Antidote Stone). Back near the torch, if you inch a little bit east, you should spy a chest in the upper right corner. The path to this breaks off when the main one starts curving south (Olive of Life M). Venture south and around, stopping when you are in between the second and third torches. There is a path here that goes up and around to the purple, locked chest on the ledge above you (Adamantine Hat). Continue east to another save point, stopping to trail off to the southeast to find one final chest (30,000 Leaves).

Return to the save point, heal up and step forward into the clearing for a scene and the boss fight. Well, you're forced to fight some of Mattias' goons before you get to him. Note that there is no rest between the two fights, but the Followers and Minion aren't really any different than the Zealots in the dungeons, except they have more health. Both are weak to swords, daggers, axes and light, so use those to quickly bring them down before they have the chance to deal any damage. The boss fight will ensue right after this battle.

Mattias will get two actions per turn from the beginning of the fight, as well as begin with four shields, gaining two shields per break recovery, up to a maximum of eight. He is weak to swords, axes, ice and light. Mattias will pretty much only do a few things during the beginning portion of the battle. He has his normal attack, plus he can use Consuming Darkness, which is a single-target dark elemental spell. It should hit around the medium range of damage, so it's nothing too bad. Black Gale hits a little less than the previous skill, but it hits the entire party, so this one is a bit more dangerous. 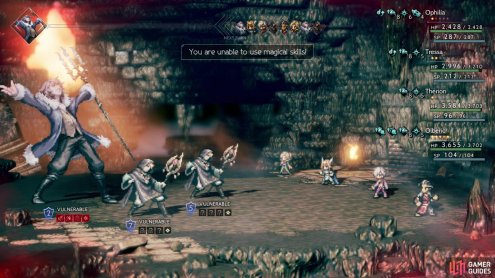 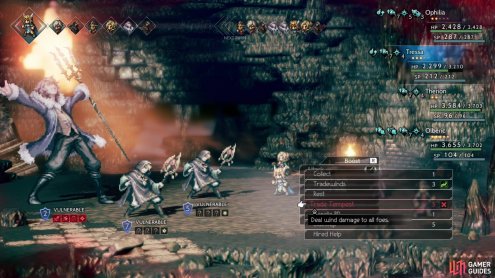 He can also summon some helpers, two Senior Cultists. Taking a page out of some older bosses' playbooks, summoning the cultists will block all of Mattias' weaknesses. They aren't particularly dangerous, but they have seven shields and a little more HP than the goons you fought prior to this battle. The only really annoying move of thiers to watch out for is Eye Scratch, which targets a single character and can inflict Blindness. They are weak to daggers, bows, fire and light.

Defeat both of the cultists to make Mattias defenseless again. At this point, Mattias can begin using Infernal Flame, an annoying move that blocks magical attacks. What it actually does is block any magical attacks that targets multiple enemies/allies, which includes the Cleric's healing spells. The only way to dispel this is to break Mattias, so get on that quickly and use healing items in the meantime. Once Mattias reaches 50% HP, he can use Infernal Prayer, a buff that increases his physical attack, physical defense, elemental attack and speed. Feel free to debuff any that you please, should you have them, but they aren't too troublesome.

Also, he can summon two new helpers, Black Matters. These elementals aren't too dangerous on their own, but the added damage they can do adds on to Mattias'. They have a single target dark elemental attack (Dark Shot), as well as a party one (Black Magic). As with the previous helpers, these two on the field will have Mattias block his weaknesses once more. They are weak to staves, lightning, wind and light, so quickly take them out (more HP than the cultists) to expose Mattias' weaknesses once more. You might not have seen it earlier, but Mattias can buff the summons with Dark Blessing, increasing their elemental attack and speed. 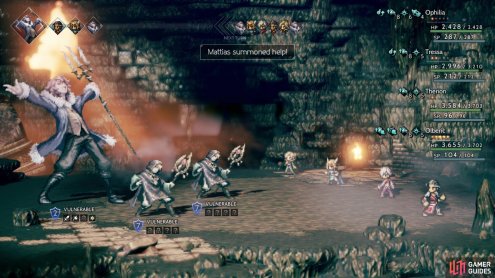 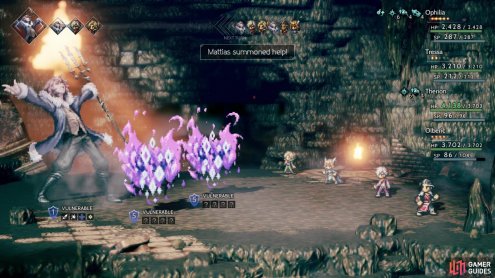 One little last trick up Mattias' sleeve is a boost mode, but this one cannot be broken. So, if he manages to get a turn up following this, he will use Black Thunder. While the damage isn't too high, it can inflict Unconscious on your characters, which can spell trouble. Because of this, if you have an Apothecary in your party, use Rehabilitate once Mattias reaches low health to ensure at least one character doesn't get afflicted. Overall, Mattias isn't too bad of a boss fight, especially if you use Sealticge's Seduction on a Cleric and have him/her use Sheltering Veil to up your elemental defenses. Just keep an eye out when he seals your magical powers and try to knock him out before he has a chance to use Black Thunder.

With the fight over, Ophilia will return to Flamesgrace to finish the Kindling and some scenes will play. You'll regain control for a moment, which is your cue to use Guide on Lianna. Bring her to the hill overlooking the cathedral for more scenes, bringing Ophilia's story to an end. 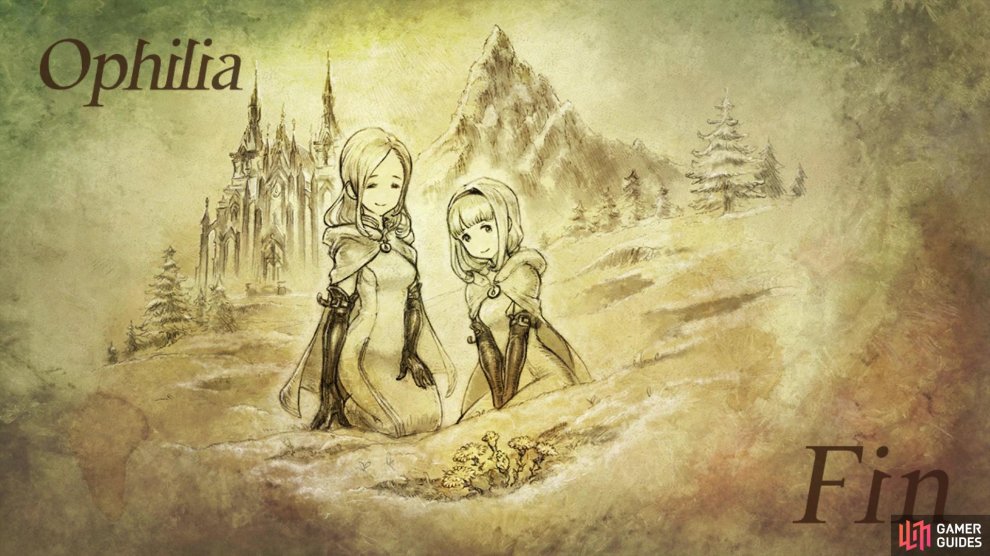