Therion's fourth chapter will begin in the town of Northreach, which is north of Stillsnow, so teleport there and begin the story from the tavern. Having found the second dragonstone in Wellspring, Therion ran into an old friend, Darius, who ran away with it. That brings him to Northreach, where Darius has set up shop. Therion witnesses some thieves doing their usual work upon entering the town, then heads to the tavern for a drink, only to see a wanted poster of himself on the wall. You'll gain control after this, so head north to witness another scene, putting you into a fight.

While this isn't a joke of a fight, the thieves shouldn't prove to be any trouble at all and will go down without much input on your end. Some more thieves show up to stir the point, but an acquaintance appears to help out. After some conversation, head back towards the equipment shop for another scene. It seems this seasoned thief is important, so follow him into the other section of town, where you'll pinpoint the location of the thieves' hideout. However, walking into the hideout like this is not a good idea, so you'll need to find a disguise. Right outside of the cathedral is a chest, so open it for an Ice Soulstone (M), then return to the southern section of town.

You will have two options here, as there are two markers on your map. Approach either of them for a quick scene, which will put them into a position for Stealing. Both of them have disguises, as well as another item on them, should you wish to pilfer them (Olive of Life M and Energizing Pomegranate L). Should you steal the normal thief's garb and enter the church, then you won't be able to do anything, so you will be forced to return to town and snatch the leader's garb. Thus, save some time and pilfer the leader's outfit first. 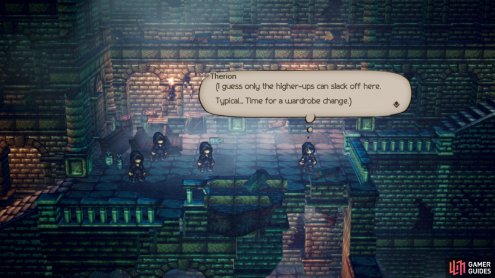 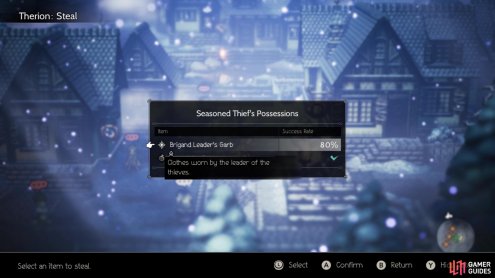 There will be a short scene upon entering and after that ends, go ahead and use the save point if needed. To the east are some stairs going down, so take them and open the chest there for an Herb of Revival. Return to the save point and head west this time, all the way to the end, where there will be another chest by the railing (Refreshing Jam). Descend the stairs and continue east, all the way down to another chest (Ice Soulstone L). Double back to the split and head south this time, where you will see some more stairs leading down.

Take those to find another chest (Gleaming Amulet), then go back up and head west. You will have a few ways to go here, with two staircases leading north and another going west, which will bring you to another area. This area will have a singular chest that contains a Wakeful Stone, so grab it and return to the previous screen. Climb the eastern set of stairs and locate the hidden passageway to your east, where you'll find a purple chest (Enchanted Sword). Continue west to the second main area of the dungeon.

There will be two paths near the beginning of this new section, so stay on the upper one and head west to eventually run into a chest holding an Energizing Pomegranate (L). Take the lower of the two paths now, bypassing the stairs to find a chest in the clearing on the left (Inspiriting Plum Basket). Venture south now, down the stairs, and follow the path until you spot some stairs going up. Ascend the stairs and pass through the hidden trail under the opening, which heads west.

Open the chest above you for a Refreshing Jam, then find the hidden path to the right of the chest to get to another (Curious Antique). Back in the hidden passageway, continue right to find yourself on a higher ledge with yet another chest (Void Amulet). That's all of the treasures in this dungeon, so go all the way back to the bottom of the map, then continue west and north to a save point. Heal up, save, then keep going north to confront Darius. 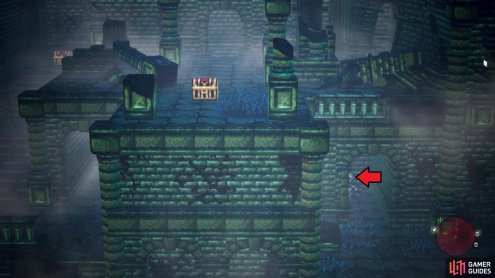 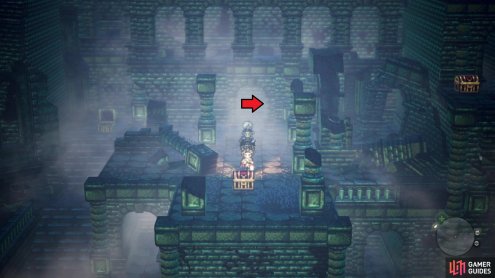 Darius is a fairly straightforward battle and only one of two where conversation will be carried out during the actual battle. He will begin the fight with four shields and upon recovering from a break, he will gain two shields, up to a maximum of eight. Luckily, he only has one set of weaknesses, which are spears, daggers, axes, ice and wind. He will block some of the weaknesses upon recovering from a break, but dagger always seems to be open, so a Therion will do wonders with Steal HP/SP.

Being similar to a thief himself, Darius will use some of the same moves, although with a slightly greater effect. He will use Steal Item at the beginning, which will seal off your items (including Alfyn's Concoct), so quickly break him to get them back; he only uses this skill once, so you shouldn't have to worry about it anymore. Steal SP does a good amount of damage to a single character, with a good 75% or so of their SP being drained. Steal HP does similar damage and Darius will recover the same amount back as dealt.

In addition to the above, he can use Steal BP, which appears to deal slightly less damage, but it takes away two BP from the character it hits. Sweep is a physical attack that will hit the entire party for medium damage, while Will o' Wisp is a single-target fire nuke that does absolutely heavy damage. Even with a good 850 elemental defense, it was still doing around 1500 damage to that character, just to give an example. That attack is only one of two magical ones Darius will perform, with the rest of them being physical. This means that Nighthawk, which debuffs your physical attack and defense, can be brutal and you should always counteract the defense part as soon as possible. 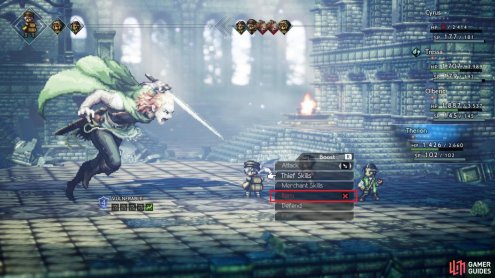 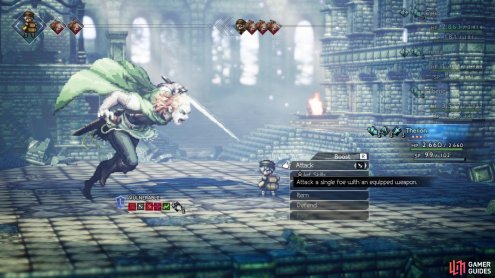 At around 50% HP, Darius will cast a buff on himself that gives him three actions per turn. He will also introduce a new skill at this point, called Hellfire. This is a two-hit fire attack that does some pretty big damage when both hits are combined, plus it has a chance to inflict Unconscious. Luckily, it doesn't seem Darius uses this much at all, so you may only see it once if you're dawdling. The biggest hindrance in this fight comes when Darius' HP is at 25% or less, which is when you might see him go into boost mode (dark aura). He will follow this up with Call Comrade on his first action on the next turn, removing the three other party members, sans Therion.

What makes this horrible is that these characters are treated as if they have been defeated, so if Therion dies to Darius when he's alone, then it will result in a game over. Therefore, it's imperative that you either break Darius as soon as possible if you see boost being activated, or you simply blitz him when he gets low on HP to avoid the chance altogether. Physical defense is a great thing to have in this battle, but don't skimp too much on elemental defense. Combine the Hired Help's Mercenaries with Shackle Foe to mitigate the physical damage the most. It's not too hard of a fight, due to Darius sticking to mostly single-target attacks, with only two really party-wide ones.

After the battle is over, you will witness Darius get his just desserts, then the game will cut to Bolderfall. Therion will hand over the two other dragonstones to Cordelia and you learn the fairy tale surrounding the use of the dragonstones. That'll bring an end to Therion's fourth chapter and with this, that knocks out half of the final stories. As usual, you will unlock a new Side Story for completing Therion's story, but if you already did Tressa's as well, then there will two additional Side Stories. 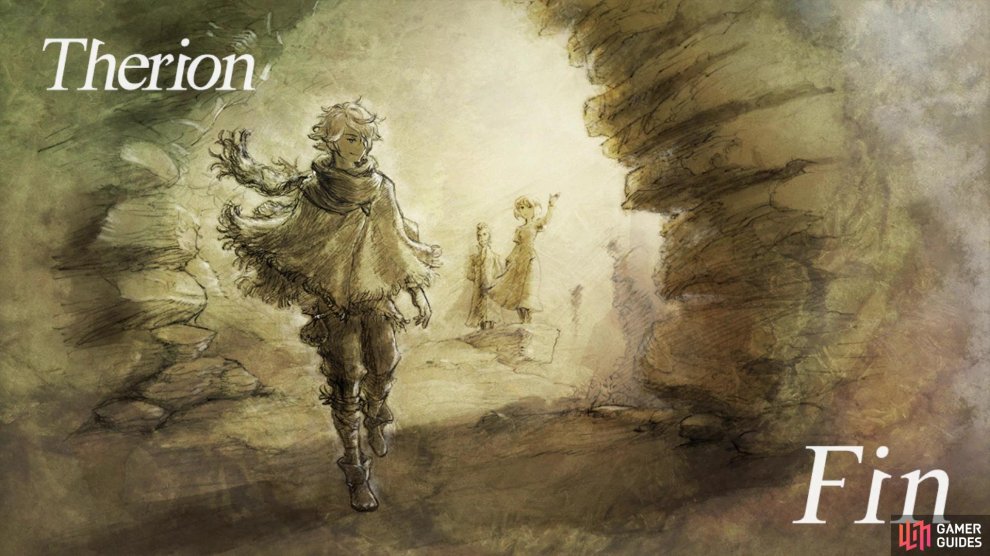