Tressa's fourth chapter will begin Grandport, so head there and use the tavern to officially begin it. After acquiring some eldrite in Victors Hollow, Tressa sets off for the Merchants' Fair in Grandport. She ends up encountering Mr. Wyndham, a rich aristocrat that seemingly helps fund the Merchants' Fair and also holds a separate competition, with the reward being one billion Leaves. This definitely catches Tressa's attention, as you regain control of your party. Head to the Markets area to the north, just left of the save point, to trigger the next scene.

As she checks out all of the wares, a lady comes and steals her notebook, of all the dastardly things to do. She thinks of a way to get it back and ends up meeting up with an old face, Ali. Another scene follows, with Tressa spotting the lady who stole her notebook, so she gives chase to the north. Approaching the auction house to the north will cause another scene to occur, with Tressa and Ali heading inside. Regaining control for a short bit, approach the door in the upper right for another scene. Thanks to Ali's distraction, you can give chase after the woman, who went into the Grandport Sewers.

This place has a similar setup to the Ruins of Eld in Cyrus' Fourth Chapter, in that, it has two main areas and some smaller ones that will only have some treasures. Start off by heading west, until you find yourself at a east-west split. Go east first, down some stairs and open the chest at the end for an Energizing Pomegranate (L). Return to the split and venture west again to the end to find another chest (Thunder Soulstone L). To the left of that chest is a hidden doorway, leading up to a ledge with another chest, this one holding an Imperial Helm. 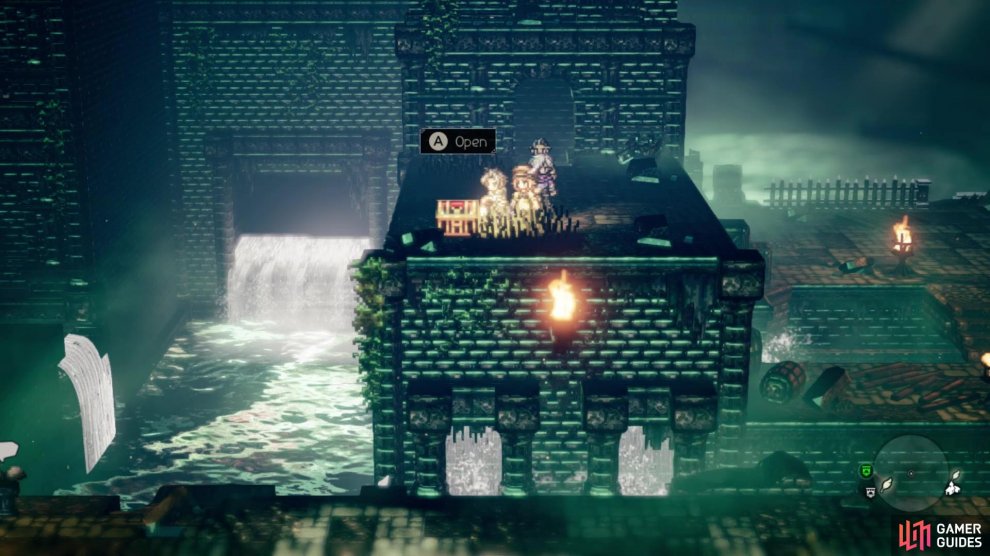 Return to the main path and head south this time, all the way to the end, where you will spot a purple chest to the east (Legion Dagger). Take the path heading west to another save point, where there will be two ways to go. South of the save point will be another chest, containing a Wind Soulstone (L), so grab it and use the bottom of the two western paths to arrive in a new area. All you'll find here is a solitary chest, holding a Force Shield for you. Double back to the previous area and take the northwestern way this time to arrive in the same area as the shield chest, but in the main area of it.

Immediately to your south will be a chest, so open it (Thunder Soulstone L) and continue west. You will eventually spy another chest in a small alcove north of some stairs, so open it for a Refreshing Jam. Next to that same chest is a hidden path, leading to another ledge with a chest (Scourge Lance). Back on the main path, descend the first set of stairs, then the second and third, stopping there. On the right side here, you can go through an opening and find another chest (Robe of the Dragon Princess). Continue south and then west, going to the corner for a chest with a Healing Grape (M). The final area is to the north, where a chest awaits you to the right of the save point (Olive of Life L). Heal up, save your game and walk into the opening to the west to find Esmeralda, your next boss.

If you thought Cyrus' final boss was different, then you're in for a treat with Esmeralda, as she has a unique mechanic specific to her. She has access to debuffs on some of her attacks, which aren't the normal kind, as you can't dispel them with items or Rehabilitate. These debuffs will seal some of your commands, meaning you won't be able to use them while the debuff is active. In fact, the only way to remove these debuffs is to break Esmeralda. Red Blade seals the Attack command, Blue Blade seals physical skills, and Violet Blade seals magical skills. Note that all of these Blades can have their damage mitigated by upping your physical defense, as well as elemental defense, so Hired Help's Mercenaries and Shackle Foe will help a lot throughout the fight.

There is one more attack like the ones above, called Black Blade, although it doesn't do any damage. Instead, it will put a counter above the character's head and when it reaches zero, then that character will be killed. Similar to the other debuffs, breaking Esmeralda will dispel it. As for Esmeralda's other moves, she has Hack and Slash, which deals big physical damage to a single character three times. By far her worst move is Five Strikes, delivering five big hits to random allies. If not properly buffed or equipped to deal with it, two of these strikes on a single character might kill some of the lower-HP characters. 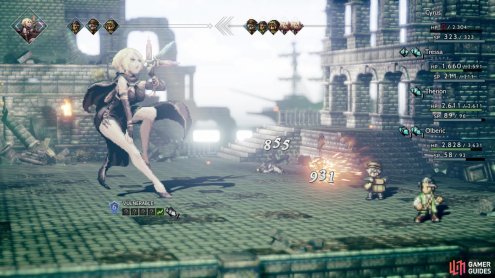 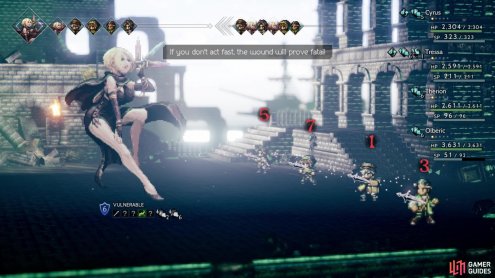 She also has something called Raven's Flight, which lowers everyone's physical defense, but it's not clear when she uses this, as it must be a fairly rare move. Esmeralda is initially weak to spears, axes, staves, wind and light, but she changes her weaknesses after recovering from a break; she will also gain two shields upon recovering, up to a max of eight. She switches between three sets of weaknesses and will always waste one of her two actions when recovering to change said weaknesses. The second set includes weaknesses to swords, bows, fire, lightning and wind, and the third set has her being weak to spears, daggers, ice, wind, and dark.

At half health (yellow name), Esmeralda breaks out a new move, Black Blade Rush. This is essentially a party-wide Black Blade, with counters being 1, 3, 5 and 7. Since it's a good probability that the character with a counter of one might die, it's a wise idea to keep Esmeralda's shields close to the breaking point whenever her turn is coming up once she reaches 50% health (a break will dispel all of the blades). Despite the blades being troublesome, the real killer in this fight is definitely Five Strikes because of the potential for disaster. If you can manage to keep Esmeralda broken, then this becomes a lot easier of a fight.

With Esmeralda finished, Tressa retrieves her notebook and heads back to Grandport to participate in the auction for Wyndham. Watch the scenes that follow and you will eventually be finished with Tressa's final chapter. As if Cyrus' chapter, you will unlock a few new Side Stories in the world (two right now if you've only finished Cyrus and Tressa. 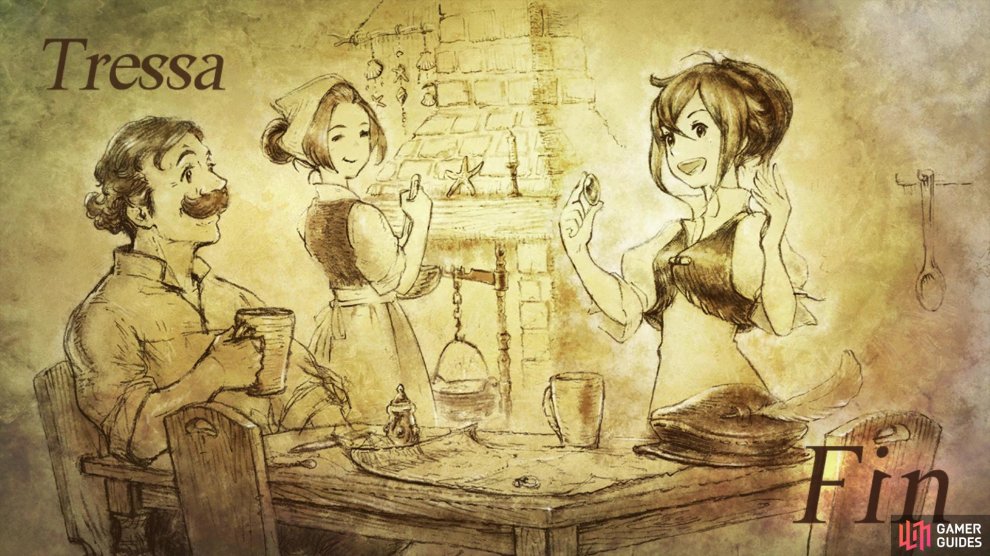