The Battle-Tested set of weapons are kind of similar to the Forbidden set, but instead of having a negative element attached to them, they have a positive one. The Battle-Tested Blade, for example, increases that character’s physical attack. There are two ways to net these wonderful items, although one of the ways was possible prior to finishing Chapter 4 stories. The first way is via Stealing/Purchasing them from specific NPCs in the wild. These NPCs do not spawn unless you complete specific Chapter 4 stories, so that’s why this was put off until now.

The other method to obtaining these strong pieces of equipment is via drops from NPCs that have a strength of ten. Naturally, these are the strongest NPCs in the game, so you will need a very strong H’aanit or Olberic (the latter is preferred because of his ability to use all skills in the duels). With the previous method, you can only get one of each Battle-Tested equipment, but it’s possible (with enough grinding) to get multiples of each by Challenging/Provoking the 10-strength NPCs. Of course, other than actually being able to defeat them, the biggest challenge is getting the items to drop, as they have a very low chance of dropping (probably around 3% or so, as a guess).

One of the better ways to go about farming the weapons from NPCs is via using Olberic, with some setting up on your end. You’ll need to have gotten Surpassing Power from the Warrior class (last support skill), BP Eater from Starseer (third skill), and both Fortitude and Physical Prowess from Warmaster (third and fourth skills). You could swap out Physical Prowess with Boost-Start from the Starseer job, but they increase the damage by the same amount. Equip these all on Olberic, then set him as an Apothecary. Challenge a high-strength NPC and lose on purpose, which will put Olberic at 1HP. You can now rechallenge the NPC, then use a boost point and Last Stand to deliver an attack that should hopefully one-shot the NPC. 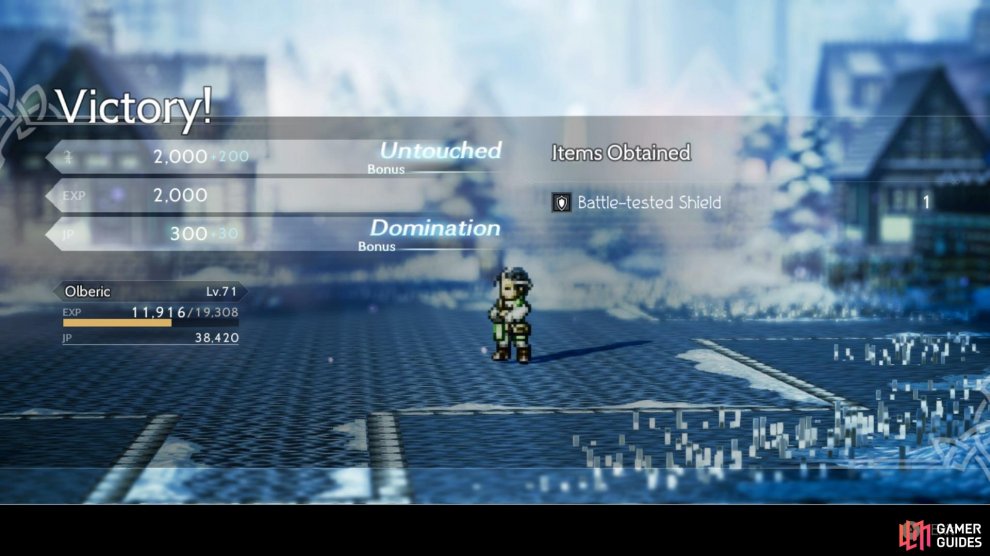 If not, then you need to work on your build a little bit. If you don’t have the Memorial Axe, go ahead and finish the Zeph and Mercedes II Side Story. Should you have any Invigorating Nuts in your inventory, go ahead and use them on Olberic to increase his physical attack. Of course, this is just a quick means to an end, as you can enjoy the fights as normal ones, if you want.

Tip: The same 1HP setup can be used to farm in the Forest of Purgation, in anticipation for the final superboss, although you may want to use Cover on someone else to avoid Olberic being killed.

The first one up on the list is the sword, with its special addition being to increase the user’s physical attack. To easily get this, you will first need to complete Olberic’s Fourth Chapter. Once you do that, head to Wellspring and enter the large house on the western end. Inside is Erhardt, who has the sword, but you can only Purchase it from him.

The NPC with the Battle-Tested Blade can be found in Bolderfall, specifically, Lower Bolderfall. He is inside of the house that’s being guarded by a NPC, who only has a strength of two. The 10-strength Townsperson inside, though, is a little more challenging. He is purely physical, so stack physical defense if you’re fighting him normally.

The spear is in possession of a certain merchant captain, but he doesn’t spawn right away. In fact, you will need to complete Mikk and Makk Make Good before he will appear. Once you’ve completed that Side Story, you will be able to find Captain Leon on the docks in Rippletide; you can Purchase or Steal the Battle-Tested Spear.

Thankfully, the NPC that drops the Battle-Tested Spear can also be found in Rippletide. To the west of the inn, there is a house that is being blocked by a NPC. Beat him up (strength of six), then inside you’ll an Elderly Woman. Of course, she holds the spear, so you’ll have to fight her if you wish to secure more than one of them. Her Peerless Strike can hurt quite a bit, plus she can boost her own physical attack. She usually does Mighty Blow after boosting her attack, which does more damage than Peerless Strike. As you can see, she’s mainly physical, so stack physical defense if you wish to fight normally.

The Battle-Tested Dagger is found on a NPC you might recognize, but the person holding it isn’t in a town. Vanessa, who you might remember from Alfyn’s storyline, can be found inside of Undertow Cove, in North Rippletide Coast. The entrance is kind of hidden behind a large rock formation on the eastern side of the map. Once you find it, you need to locate Vanessa, who is towards the eastern side of the cove. You can keep trying to Steal the dagger, since there is no penalty inside of this dungeon, but it’s probably easier to just Purchase it, especially if you have a lot of money.

Once again, you’ll find that the NPC who drops the Battle-Tested Dagger to be mainly physical. The Guard Captain in front of the Ravus Manor is who holds the dagger. He usually starts the battle with Slow Motion, decreasing your speed, then follows up with physical attacks. He is weak to both swords and spears, so using Thousand Spears to break his shields is ideal if fighting normally. 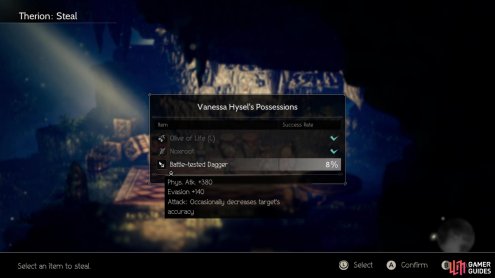 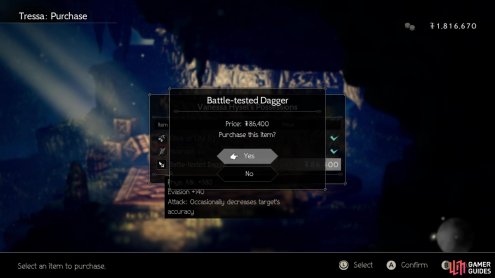 The Battle-Tested Axe can be found on Ned, who you might remember from Olberic’s storyline. Ned is located in Victors Hollow, in the northern area of the town, just down the stairs leading towards the arena. You can Purchase or Steal the axe, but you might also want to grab the Crystal Vest he has on him, too, as it’s a pretty nice piece of defensive gear.

The NPC with the Battle-Tested Axe can be found in Atlasdam. Inside of the tavern, on the left side, is a man clad in armor. That’s who you want and he is purely physical in nature, so stacking physical defense is the key to winning normally. He can increase his physical strength, so be careful of that, although with high enough defense, his attacks shouldn’t be doing more than 500 damage to Olberic.

For the Battle-Tested Bow, you will need to travel to S’warkii and have finished H’aanit’s Fourth Chapter. Near the save point in the village will be Z’aanta, H’aanit’s master. He has the bow on him and you can only Purchase it with Tressa.

Luckily for you, the NPC that drops the Battle-Tested Bow is also in S’warkii. Inside of the tavern is an Old Storyteller on the right side. This one is not physically-oriented, as he has access to both Ice Storm and Lux Congerere. That means if you wish to fight him normally, you will want to bring along some elemental defensive gear.

The Battle-Tested Staff can be found in Saintsbridge, inside of the cathedral. Bishop Bartolo has it on him and you can only use Purchase to get it, as Steal has a 0% chance of success.

The NPC who drops the Battle-Tested Staff can be found in Clearbrook. Make your way to the cemetery towards the eastern side of the town and you will find an Elderly Woman. She’ll start out the battle by upping her physical attack, then proceed with dishing out physical attacks. So, that means you will want to increase your physical defense if you wish to fight normally.

To easily acquire the Battle-Tested Shield, fast travel to Marsalim, in the Sunlands. In the middle of the square, not too far from Swordsman Yuri, is Grieg the Unbreakable from Olberic’s storyline. As with a lot of these Battle-Tested weapons, you cannot use Steal to get it, so you’ll have to Purchase it with Tressa.

The NPC that drops the Battle-Tested Shield is located in Flamesgrace and you’ve actually used him in a previous Side Story. The Muttering Codger at the base of the hill that is used in Ophilia’s story a few times is who drops it. Like the majority of the NPCs who drop the weapons, he is physically oriented, so you will want to stack physical defense, if you choose to fight him normally.

You don’t really need any of the Battle-Tested equipment, apart from the easy ones, to defeat the secret superboss, but they definitely help. At this point, you should have acquired a good amount of powerful weapons in your travels, across all of the weapon types. If you want to farm anything, the Battle-Tested Shield can be a good thing, as the HP and SP regen on it is always nice to have. However, while the regen is nice, it only has physical defense on it, so the lack of elemental defense is something that’ll be sorely missed.