Note: If you’re exploring this area after starting the event card “Troll Invasion”, there will be another encounter in this area. This is covered in the Troll Trouble - Renowed Explorer section of the guide.

The first stop on your journey is impossible to miss unless you go out of your way to do so. From Tuskdale, merely head:

Here you’ll find “A Ford Across the Skunk River”. Lovely name for a river. You won’t be crossing the river here, but it’s still worth checking out the area real quick. 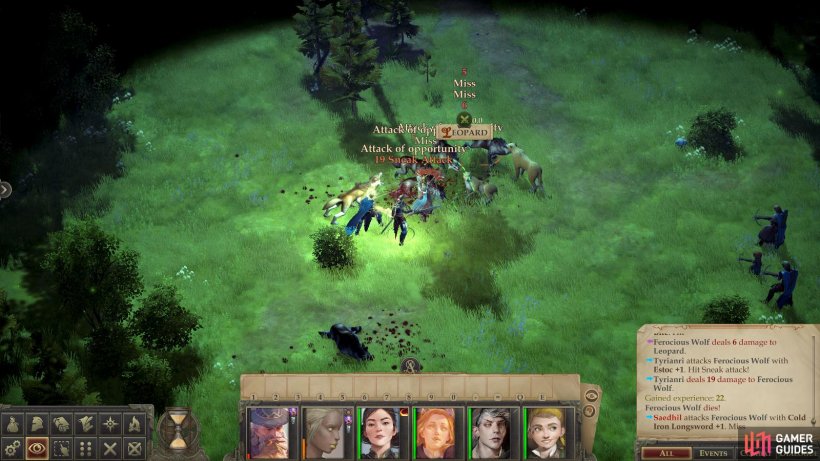 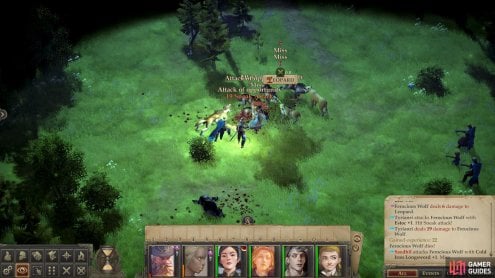 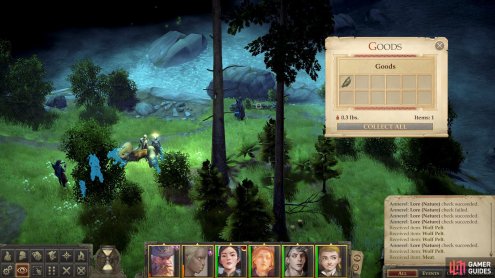 Kill some wolves in the southwestern corner of the map (left), then search a ruined stone wall to find a Shard of Knight’s Bracers. (right)

If you are here early (during the suggested expedition, before Troll Trouble has started) the area will be pretty vacant. From where you appear near the southeastern corner of the map head west. When you approach the southwestern corner of the map you’ll find a pack of Ferocious Wolves; initially there’s only three of the mutts feasting on a corpse but they’ll soon be joined by a few more wolves lurking up north. By now they should be no match for you, so eradicate them.

Next make your way north until you hit a river, then follow the river east until you find a thoroughly ruined wall. Succeed at a [Perception 7] check to find a stone you can search where you will find a Shard of Knight’s Bracers. 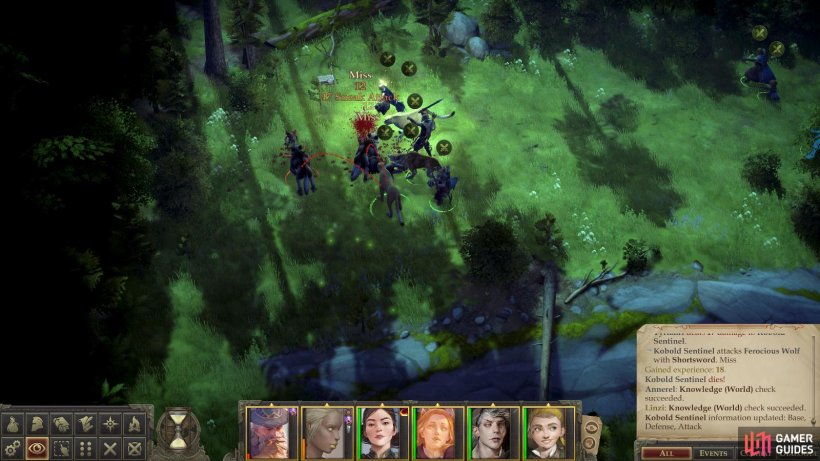 (1 of 3) Kill some wolves fighting some kobolds

With that, you’re done on this side of the river. Head east until you find a trail running to the north, which will lead to a fordable part of the river. Cross the water and continue along the trail until you find a navigable section of forest to the west and continue westward into the wilderness until you find nature playing out in the form of three Ferocious Wolves attacking two Kobold Sentinels. Play the spoiler and ensure both sides are wiped out, then loot the chest the Kobolds were guarding to score some treasure, including the Recipe: Galt Ragout.

From this chest turn south and pass a [Perception 19] check to find a container hidden behind a tree, inside of which is a Torag’s Pendant.

Note: Torag’s Pendant is another item you should give to the antiquarian (Storyteller).

Sick of wolves yet? No? Wonderful! Return back east to the road, then continue east into another navigable patch of wilderness to find three more Ferocious Wolves led by an Alpha Wolf. Fortunately the foliage nearby can serve as a bottleneck, which you can use to limit the number of wolves that can attack at once. While the wolves aren’t terribly strong, they’re more dangerous in groups, especially if the Alpha Wolf lands trip attacks and allows its lesser wolves to score Attack of Opportunity. Defeat the wolves, then continue east to find a tree stump, hidden in which is a Ring of Protection +1.

All in all, not a bad little area. You earned a few hundred Experience Points and scored another Ring of Protection +1. This should be your fourth such ring, enough to satisfy most - if not all - of your main combatants.