After fending off the bandit attack on Oleg’s Trading Post and sleeping overnight, talk to Svetlana, who sheepishly attempts to waste your time asking for a favor. Indulge her and she’ll ask you to recover her wedding ring if you find it during your battle with the bandits… and more interestingly, she’ll beg you to spare the life of a “dark-haired woman who wields dual axes” if you should encounter her. Interesting… Good or evil, don’t turn her down and you’ll get the quest Svetlana’s Ring. Everybody can use the experience, after all. 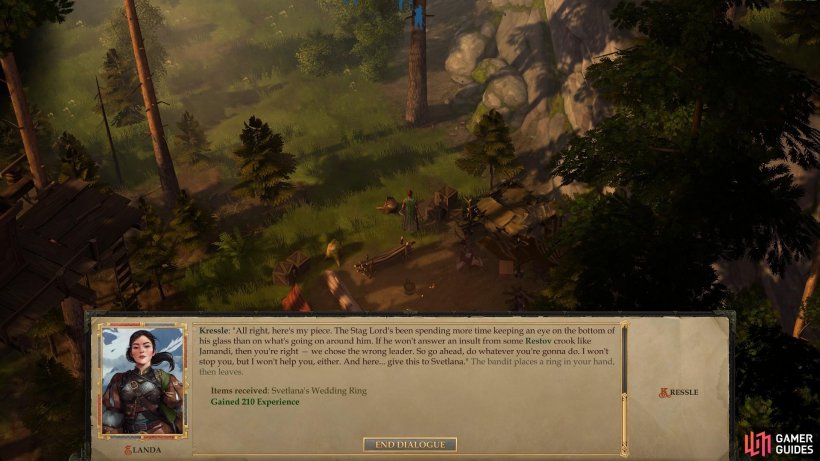 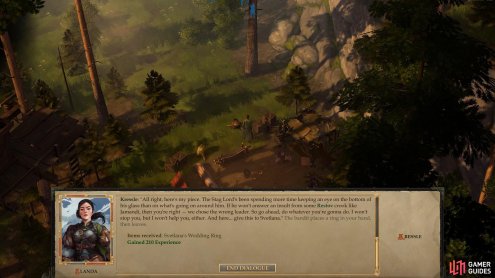 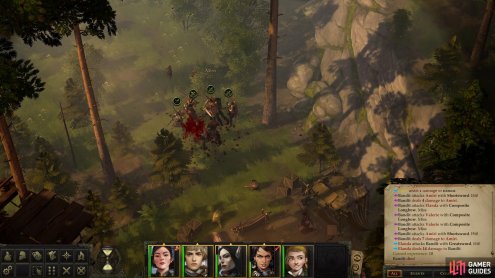 You can get Svetlana’s Wedding Ring via diplomacy (left), or through violence. (right)

You’ll find this “dark-haired woman who wields dual axes” in Thorn Ford, leading a group of bandits in the southeastern corner of the area. Turns out it’s none other than Kressle, and your encounter with her here will vary depending on whether you’ve completed the Ancient Tomb or not prior to this. If not you’ll find a rather dignified man named Akiros Insmort, otherwise you’ll talk directly with Kressle. Either way, if you pick the [Lawful Good], [Chaotic Good], [Neutral] or [Neutral Evil] options you’ll end up having to fight Kressle and the bandits. Only if your protagonist is Good-aligned can you pick the [Requires Good] response, which seems to succeed because it points out the Stag Lord is the “wrong leader” for these lands.

If you have to fight, kill Kressle and her bandits and loot her for Svetlana’s Ring, otherwise she’ll give you the ring as a parting gift if you talk your way out of a fight. With the ring in hand, return to Svetlana to complete this quest.