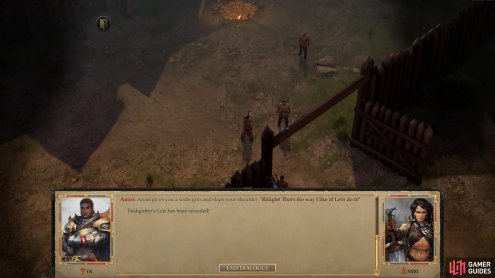 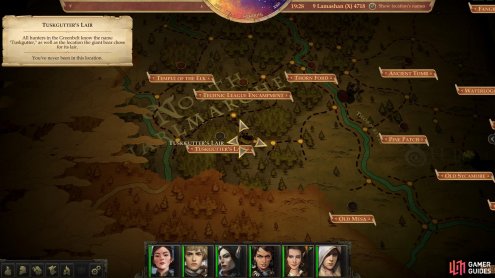 Return to Oleg's Trading Post after dealing with the bandits and freeing Jhod Kavken at Thorn Ford and Oleg will tell you about a monstrous boar that's been causing trouble in the area. He wants its head, and Amiri views this as a task she can use to prove her worth to you, making it part of the companion quest Prove Your Worth as well. Although this quest is technically isolated (at least in your journal) from Prove Your Worth you must have Amiri in your party to enter Tuskgutter's Lair, so be sure to bring Amiri along lest you make the trip in vain.

Tuskgutter's Lair is pretty far afield, as far as Chapter 1 goes, being located in the North Narlmarches past the Thorn River. It's a ways to the southeast of the Temple of the Elk, although these's not direct path there. To reach it, follow these directions from Thorn Ford:

When you arrive, head north and Amiri will speak, telling you more of her customs which, despite being far from home, she still tries to emulate. Suffice to say, she'll attempt to slay the beast alone, but despite her boasting, she's probably not going to win a fight mano-a-porcine in Chapter 1. The beast is reasonably well protected in terms of Armor Class and HP, although neither are stupendous. The same goes with its Attack bonus. All in all, it's more than a match for a single warrior in your party (especially one with an Armor Class as shaky as Amiri's) but it shouldn't present a serious challenge to you as a group.

Defeat the hog and Amiri will strike up another conversation, revealing that it's not her old tribe she was trying to impress and gain legitimacy in the eyes of, but her new tribe: the adventuring party. D'aww... Take Tuskgutter's Head, then continue north and loot a corpse to find a Wand of Find Traps and An Ancient Rostlandic Coin. Return to Oleg at your leisure to complete the quest and claim your reward.