Below you will find information on the strengths and weakness’ of every type of attack. Learning this will help you achieve victory more often than not.

The table is structured so that when you want to check it; simply look at the left column first to match what move-type you’re using and then look right to match the Pokemon-type you’re facing.

Listed are the extremities, so if you don’t see a match up mentioned then that means it will do a normal, unspectacular amount of damage

Example: If we were up against a Fire-type Pokemon, then from the table we can see that using another Fire-ype against it would be a waste of time as it does only half the damage. However; if you had a Pokemon with Water , Ground or Rock-type moves, then you’d be dealing 2x the damage levels. 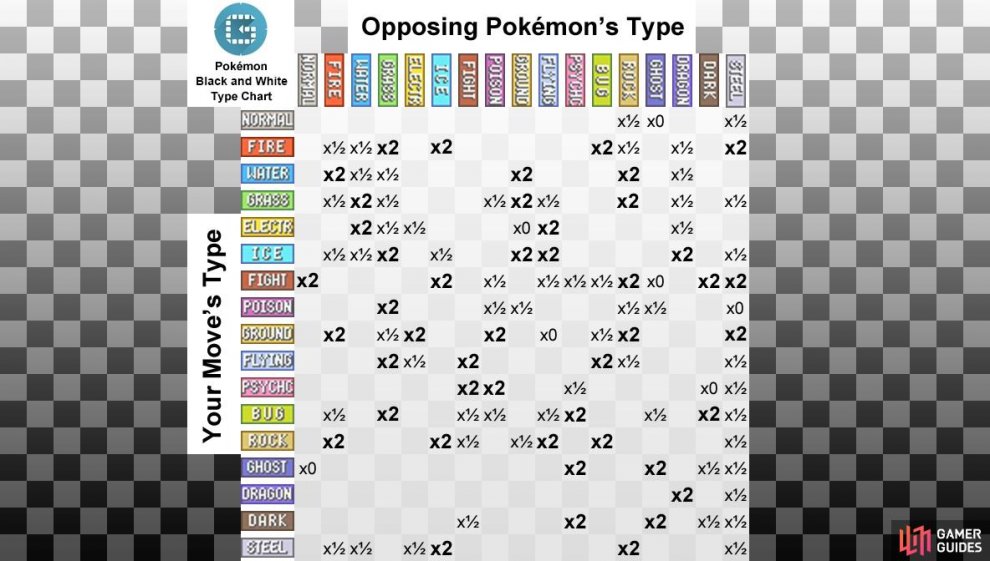 The numbers shown are the damage multipliers. So x2 means the move is “super-effective” and does twice the normal damage.

Alongside simple effects of being hit, the type of a Pokémon can give it extra benefits in combat.

A Pokemon can have more than one type, so what happens when a Pokemon has two types? For example, the Fire/Fighting Emboar?

These situations are rather common, but fortunately it’s not too complicated to determine the outcome. Simply look at your move’s type, then figure out the damage multiplier separately for both of the opponent’s types, then multiply the two multiplers together.

How to become the greatest trainer Unova has ever known with our highly-detailed walkthrough of the main story and beyond. Pokemon trainers and collectors alike will appreciate our extensive lists of Pokemon and item location, ensuring nothing important goes under the Poke Radar!