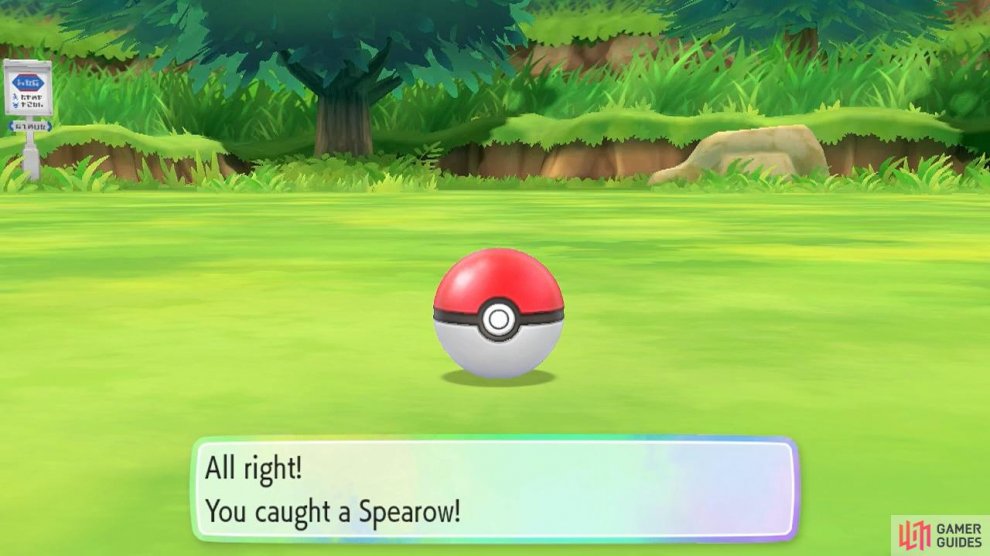 We know it’s very easy to play favourites–and only focus on catching Pokémon that you’re intending to train and/or that look cool or cute, etc. However, like the famous slogan in the past, you should try to catch ’em all, as in every new Pokémon that you see.

For starters, you can’t really afford to be picky early on, when there are few Pokémon to choose from. So you’ll want to catch a lot of Pokémon anyway to build up your team, so you’re prepared to challenge the likes of Gym Leader Brock and Misty.

Secondly, in lieu of wild Pokémon battles, catching Pokémon is one of the main ways to earn experience points to power up your Pokémon. In fact, if you’re good at catching Pokémon, it’s generally more efficient than battling Pokémon trainers.

Thirdly, you can get some nice rewards by catching X number of Pokémon or Y number of unique Pokémon species. This includes the three original Kanto starter Pokémon! Not to mention, you cannot even step foot in the Fuchsia City Gym unless you have caught 50+ Pokémon species.

After you’ve built up your team and broke past 50+ species, there’s less incentive to catch new Pokémon, but if you’ve come this far, you may as well keep going! Should you catch all 150 non-Mythical Pokémon, you’ll receive a fancy diploma and a coveted Shiny Charm.

Give Yourself a Helping Hand… 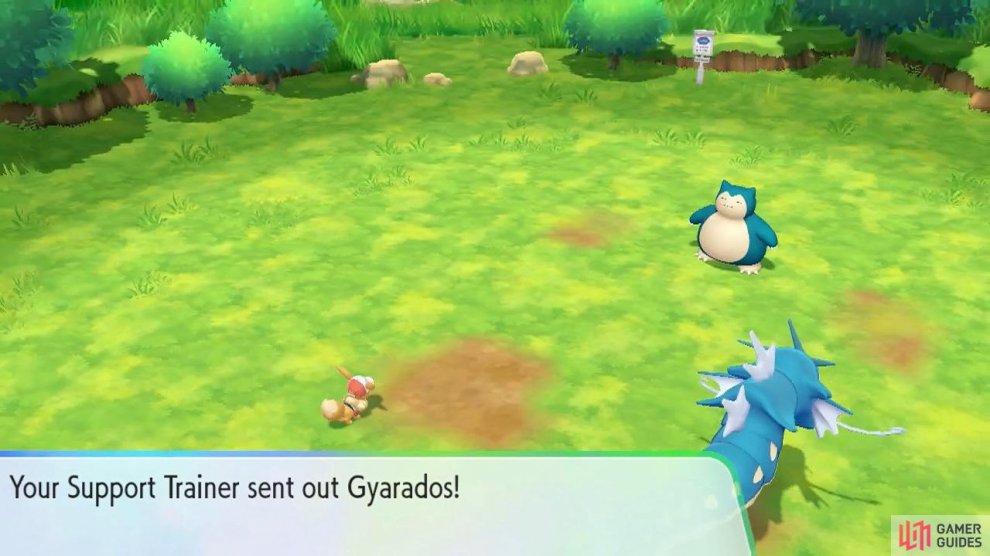 New to these pair of the games is the ability to play local co-op with another player. All you need is a second Joy-Con controller that already comes with your Nintendo Switch. A second player can join in at practically any moment–even in the middle of a battle or catching a Pokémon!

To be honest, the co-op is a little bit limited, because Player 2 can’t really do anything when exploring areas–only Player 1 can encounter wild Pokémon, pick up items, advance to new screens etc. However, during trainer battles or when catching wild Pokémon, Player 2 can be extremely helpful.

Against trainers, Player 2 will team up alongside Player 1 and battle with the second Pokémon in Player 1’s party. This basically allows you to gang up on trainers. Which can seem pretty unfair, but there’s nothing in the rules to say you can’t!

Meanwhile, when catching Pokémon, Player 2 can also throw Poké Balls. If both players throw a ball at the same time, the two balls will combine into one–and there’s a higher chance that the wild Pokémon will be caught. Plus you will earn more experience points!

Now, not everyone will have a Player 2 on hand. But everyone should have a second Joy-Con. Since you can play the whole game with one Joy-Con (or the Poké Ball Plus) in one hand, that means you have a free hand to operate Player 2’s Joy-Con.

So if you’re facing a really tough trainer or wild Pokémon, consider summoning Player 2 yourself. As trainer battles are turn-based, it’s easy to take turns controlling Player 1 and Player 2. For wild battles, you’ll have to synchronise both of your hands, but it’s not hard to get the hang of.

(By the way, you could also attach both Joy-Con to the Joy-Con grip that comes with your Nintendo Switch. However, we don’t recommend using it when catching wild Pokémon, unless you have a way to tie it to your wrist.) 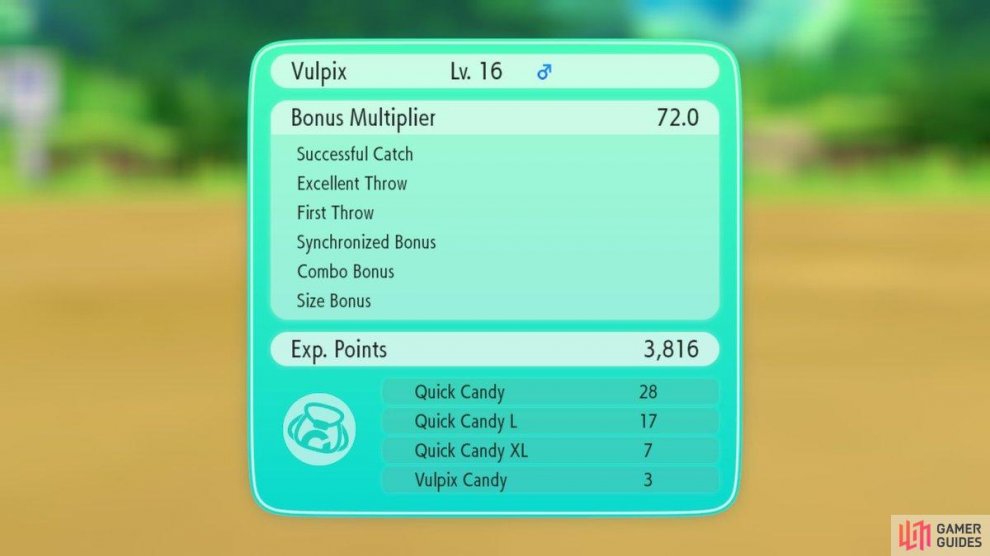 After catching a wild Pokémon, you may have noticed a “Catch Combo” during the results. When you keep catching Pokémon of the same species, this Catch Combo will increment by 1. However, the combo will break if you catch a different Pokémon species or the targeted Pokémon runs from you.

The game doesn’t really explain what the point of a Catch Combo is, but it’s not hard to figure out.

Firstly, as the combo increases, you will earn more experience points. This appears as “Combo Bonus” in the list of Bonus Multipliers. So if you want to grind for experience, it’s usually more efficient to keep catching the same Pokémon over and over. Of course, this may seem dull to some.

Slightly less obviously, the higher the Catch Combo, the better the chances of rare spawns and tiny/large Pokémon appearing in the wild. “Rare spawns” are super-rare Pokémon that don’t have habitat info in the Pokédex. This includes Bulbasaur in Viridian Forest.

So if you’re stuck trying to find a rare spawn, you can make it easier by building up a Catch Combo first. You will need to reach a combo of 11+ to begin seeing changes and the effect maxes out at 31.

In addition–and this may be quite important to some–the higher the Catch Combo, the better the chances of encountering rare Shiny Pokémon. Likewise, you need to reach a combo of 11+ before the shiny rate is boosted and a combo of 31 is sufficient to obtain the best shiny rate.

Note that the Catch Combo does not reset if you run from any Pokémon. So don’t panic if you encounter the wrong Pokémon species by accident. You can also sleep your Nintendo Switch to preserve the combo, but saving and reloading your game will not keep your combo. 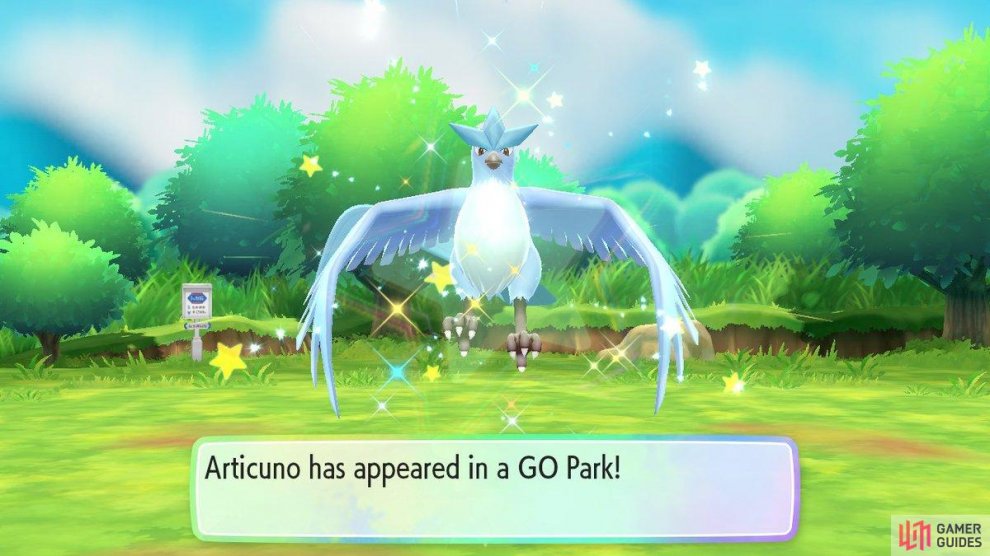 One of the biggest advertised features of Let’s Go is the connectivity with Pokémon GO on smart devices.

When you reach the GO Park Complex in Fuchsia City, you can transfer any Kanto region Pokémon (the first 150 in the Pokédex) plus #808 Meltan and #809 Melmetal from Pokémon GO to Let’s Go. This includes Alola forms, but does not include Pokémon with special hats or sunglasses. Sorry!

(Please be aware that the transfer is one-way. Once a Pokémon reaches Let’s Go, it cannot go back to GO!)

Now we understand Pokémon GO isn’t for everyone, but hey, if you’re playing Let’s Go, you’re basically playing Pokémon GO but exploring Kanto instead of the real world. Especially in terms of the catching mechanic. So if you can play Pokémon GO and can spare a few pennies of mobile data, why not?

For one, if you don’t have anyone to trade with in Let’s Go, you might be able to transfer Pokémon from GO instead. Many version exclusives like Vulpix or Growlithe can be obtained in GO. Plus Pokémon that evolve via trading in Let’s Go, like Graveler, simply need candy to evolve in GO.

Also, if you’re dedicated enough, you can probably get certain Pokémon that are rare in Let’s Go more easily in GO. Especially if you play during specific event days, like the Community Days or special raid days.

For example, it’s a pain in the butt to hunt for shiny Eevee in Let’s Go. What with the low encounter rate and Eevee hiding in the tall grass. But during the Eevee Community Day, you could hope to catch half a dozen or so in 3 hours.

Lastly, at the time of writing, you can only acquire the two new Mythical Pokémon, Meltan and Melmetal, by playing Pokémon GO. Meltan is pretty easy to get. You will receive a Mystery Box the first time you transfer a Pokémon from GO to Let’s Go. This then functions as a Meltan lure for 30 minutes.

Melmetal is a bit tougher though. You can only evolve Meltan into Melmetal in GO and it requires 400 Meltan candies. You can get 3 candies per Meltan you catch (6 with a Pinap Berry) and you can probably catch 15 or so in 30 minutes. So 45-90 candies per go.

After using the Mystery Box once, you cannot use it until 7 days have passed (and you transfer from GO to Let’s Go again). So it’ll be a couple of weeks before you have enough Meltan candy.