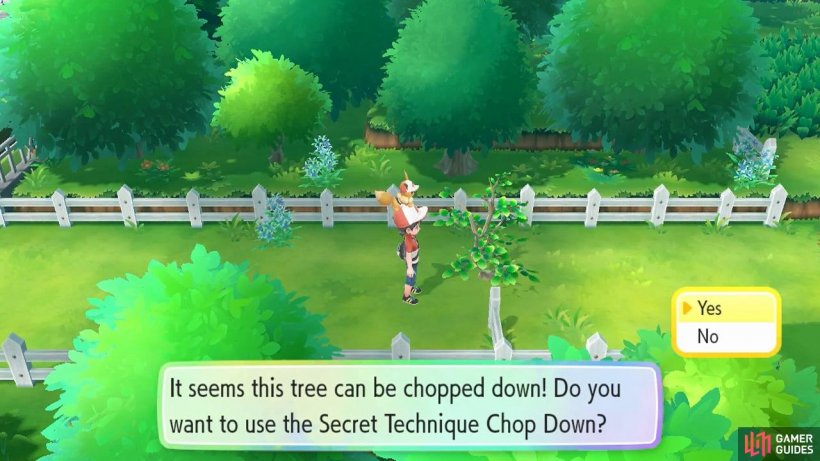 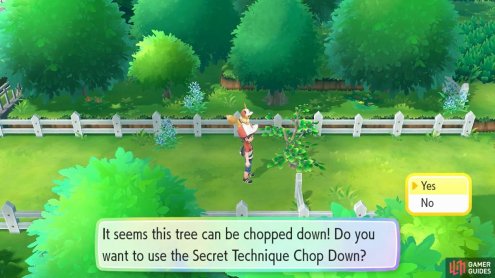 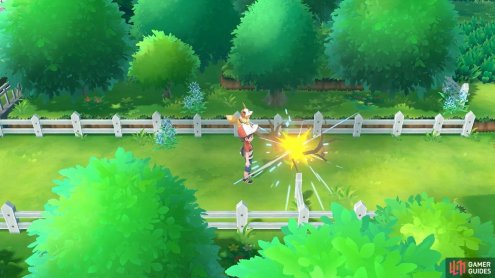 Before (left), After (right)

Throughout the Kanto region, there are masters that can teach “Secret Techniques”, which are Pokémon abilities used outside of battle. These techniques can remove obstacles and more. Essentially, they’re the same as the Hidden Machines (HM) in earlier games. But they do not take up a move slot. Also, only your partner can learn them.

After you’ve learned a Secret Technique, you can use it by going to “Play with Pikachu/Eevee” from the main menu and choosing “Secret Techniques”. Alternatively, you can choose to use them if the situation dictates as such. For example, if you inspect a skinny tree, the game will ask if you want to use Chop Down.

The very first Secret Technique lets you cut down skinny trees blocking the way. It replaces HM01 Cut from the original games. You can learn it from the Captain aboard the S.S. Anne.

This allows you to fly back to any town or city you’ve already visited. A map of the Kanto region will appear and you can select your destination. Obviously, it replaces HM02 Fly. You can learn it from a woman on Route 16.

This technique grants your partner incredible strength, so it can push stone blocks out of the way. After using it once, you can press the interact button to keep using it. It replaces HM03 Strength. You can learn it from the Warden in Fuchsia City.

Your partner rides aboard a surfboard, allowing the pair of you to travel across water. If Gyarados or Lapras is your Buddy Pokémon, you’ll ride on them instead. It replaces HM04 Surf. To learn it, you need to find a man next to a Lapras in Fuchsia City.

Finally, this technique lights up extremely dark places. The only place you can use it is the Rock Tunnel. It replaces HM05 Flash. You can learn it from a Scientist who lives on Route 2. You’ll need to go through Diglett’s Cave to reach him.

Secret Techniques can be used as soon as you’ve got them. So you don’t need to have obtained a certain Gym badge like in previous games. This lets you explore some locations slightly out of order, should you so choose.