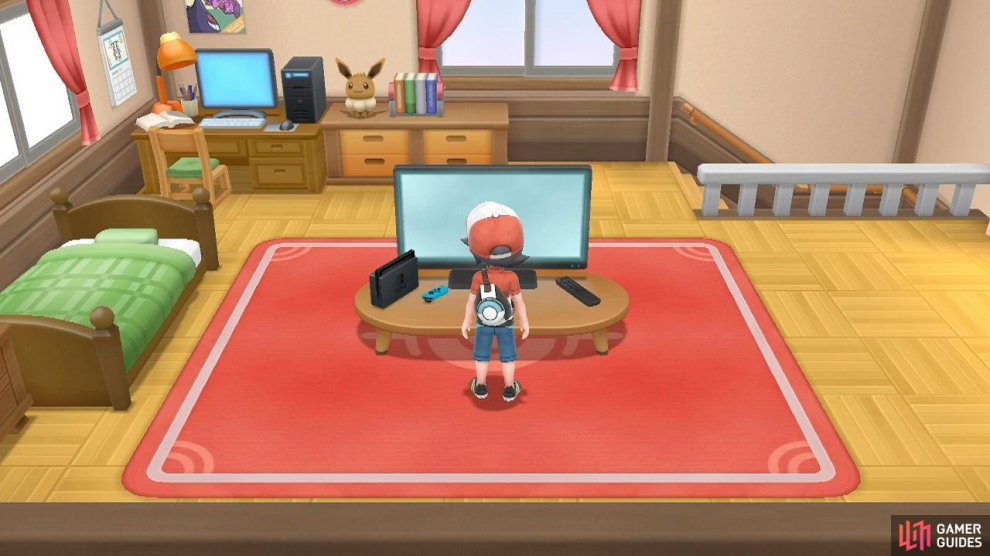 You'll start the game proper in your bedroom in Pallet Town. Just like in the original Pokémon Red, Blue, Yellow and the GameBoy Advance remakes. Of course, things look slightly different now--for starters, everything is in full 3D! The console in front of the TV is also a Nintendo Switch, just to remind you of the times.

Besides that, pressing the X button (or the top, red button on the Poké Ball Plus) will open the main menu, where you can access all sorts of things, although most of them are disabled right now. That said, you can save your game progress--which you should remember to do often, because the game does not support automatic saving.

Right now, there are only two key things you can do. First, if you walk over to your desktop in the top-left corner, you can inspect the monitor to find a helpful e-mail from your rival. If you read it, you'll find it's just the information we gave you. Otherwise, approach the stairs in the top-right corner to try and leave your bedroom.

Before you can get anywhere, your rival will barge in, telling you to head over to Professor Oak's Lab. Once he's gone, follow him down the stairs to the ground floor of your house. Downstairs, speak to your mom and/or check out your house if you want. Either way, exit your house via the doorway to the far south. 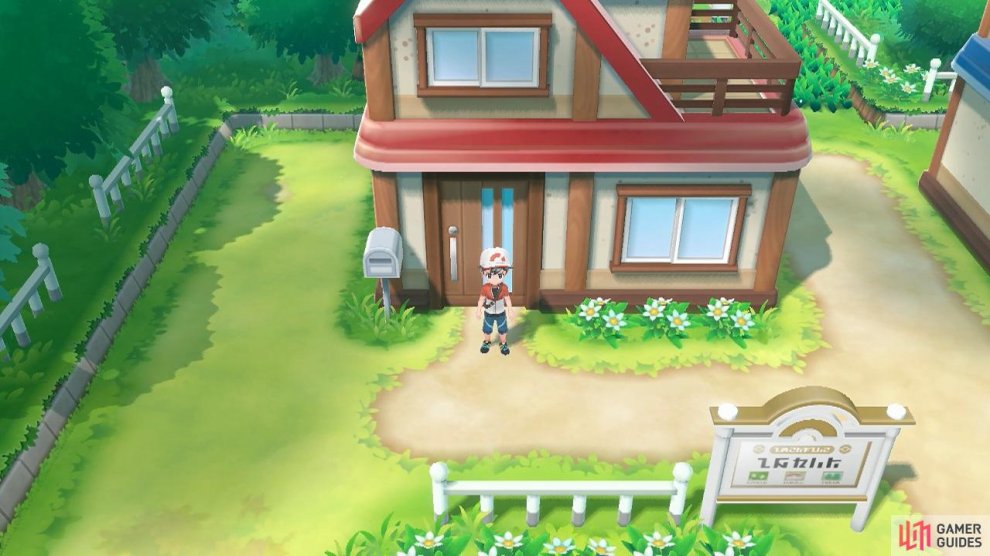 Outside, you'll emerge from the house near the north-west. Directly to the east is your rival's house. If you want, you can have a look, but there's nothing to see there besides your rival's big sister. Meanwhile, to the south of your rival's house is Professor Oak's Lab, which isn't actually your next destination.

That said, you can visit the lab now if you want--you'll just be told that the Professor is out. Other than that, there aren't any other places in this tiny, little town. It does make you wonder where the people standing outside live though... Maybe in the lab? Or maybe they're visitors from another town? Actually, let's not question videogame logic!

To kickstart your Pokémon adventure, head for the north exit of Pallet Town, in-between your house and your rival's houses. You should find Professor Oak standing at the end of a patch of tall grass. Just as he's got something to say, a surprise guest will interrupt your conversation: the Pikachu or Eevee from earlier! 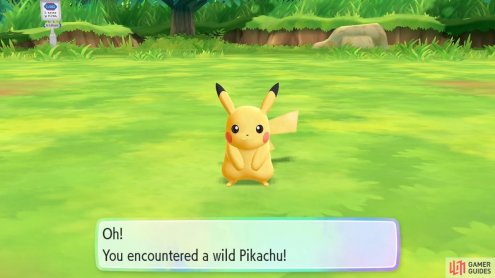 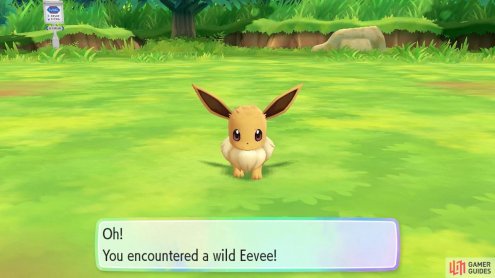 Without further ado, it's time to become a Pokémon trainer and catch your first Pokémon!

In Pokémon Let's Go, catching Pokémon works differently compared to previous Pokémon RPGs; instead, it works similarly to Pokémon GO. First things first, to begin catching, select the "Get Ready" option at the very top. This will tell the game that you're ready to throw a Poké Ball.

Once you're ready, you can throw a Poké Ball by waving your Joy-con controller or Poké Ball Plus as if you were actually throwing a Poké Ball. You can either throw overarm or underarm--try both and see which one works best for you. If you are playing in Handheld mode, you can aim by moving your Nintendo Switch around and throw by pressing the A button.

There is no guarantee that you will catch a Pokémon with a Poké Ball--it's all down to chance. However, you can increase your chance via a number of methods. Notice the second circle around the Pokémon that gradually gets smaller. If you can throw a Poké Ball in this second circle, the smaller the circle is, the better your chances.

Should a Pokémon break out of a Poké Ball, don't worry, as you can try again. Simply go back to "Get Ready" and repeat the procedure. Then keep going until you catch the Pokémon. Don't be alarmed if you keep missing the Pokémon with your Poké Balls at first. This is a long game and you'll get a lot of opportunities to practice!

For this particular occasion, you will have 10 Poké Balls to use. However if you somehow run out of Poké Balls, the Professor will kindly give you more. So you cannot fail to catch Pikachu or Eevee--or otherwise this would become a pretty lonely game! Therefore, just relax and try to get used to the controls, especially if it's your first time. 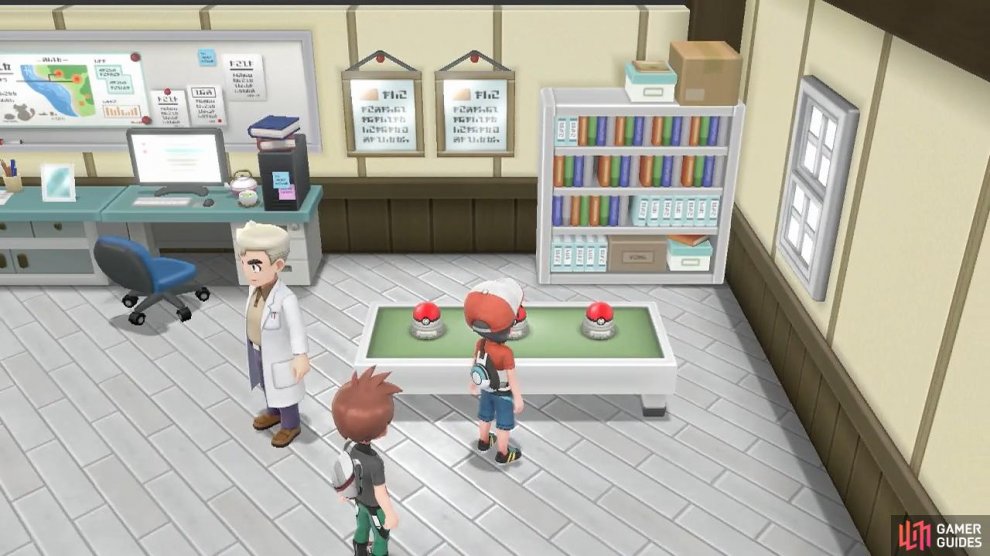 Having caught your first Pokémon, it will unbelievably make a dash for it. You and the Professor will automatically chase the Pokémon towards Professor Oak's Lab. There, inspect the Poké Ball in the middle--you know, the really obvious jumping one--to officially obtain your partner Pokémon! If you'd like, you can give it a nickname!

It's all in a Name

Every Pokémon you catch or obtain yourself can be given a nickname, for a personal touch. You can also rename a Pokémon at any time from the main menu, by going to "Party", selecting a Pokémon and going to "Change Name". Pokémon in your box can be renamed as well.

But keep in mind that Pokémon obtained via trading cannot be renamed, except by their original trainer. This restriction also applies to Pokémon obtained from trades with NPCs (non-playable characters) in the game itself.

Your rival will choose the Pokémon from the opposite version of yours. So if you're playing Let's Go Pikachu, he will pick Eevee and vice versa. This does pose the question of what Pokémon is inside the remaining Poké Ball. Originally, Professor Oak gave starting trainers a choice from Bulbasaur, Charmander and Squirtle, but that doesn't seem to apply here.

Wondering aside, you're now free to leave Pallet Town, which is probably a godsend since there's really nothing to do here. How on earth you managed to survive your childhood here, we'll never know. Upon exiting the lab, your mom will come over to say farewell and give you a Town Map. You can check it out by opening the main menu and going to "Bag".

Once again, head for the north exit of town, where you first met Oak. Then carry on straight north to leave for your big adventure!