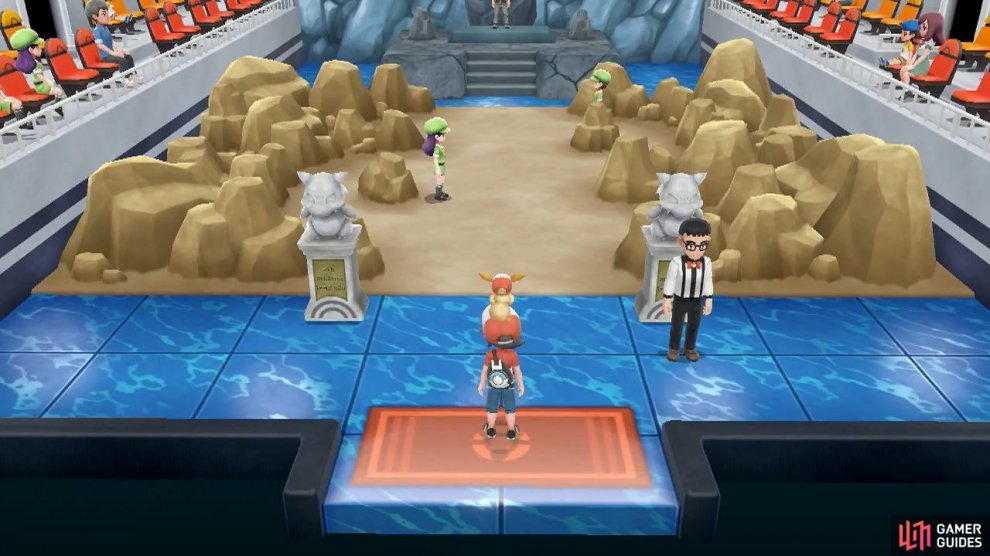 For the benefit of those new to the Pokémon experience, Gyms are places where Pokémon trainers gather to fight. There are eight Gyms in the Kanto region and each Gym specialises in a specific Type. In the case of the Pewter City Gym, it's Rock-type Pokémon. Challengers must fight their way through the Gym trainers, before going up against the Gym Leader.

As you enter the Gym, you'll be stopped by a man wearing glasses. He'll inform you that you cannot enter unless you know your Type Match-Ups. To prove your knowledge, you'll need to show him a Water or Grass-type Pokémon that's super-effective against Rock-types. The easiest choices are Oddish/Bellsprout or Bulbasaur if you're lucky.

For the uninitiated, what makes Pokémon stand out from other RPGs is the fairly complex Type Match-Up system. There are 18 different Types, from Normal all the way to Fairy. Each Pokémon is assigned one or two of these Types and every move is also given a Type.

Assuming you have an applicable Pokémon, proceed north to challenge the two Gym trainers. Although if you're feeling especially confident and/or you're rushing through the game for some reason, you can avoid both of the Gym trainers by going behind them. The choice is yours, but we'll document both anyway.

As you should know by now, Rock-type Pokémon are weak to Water and Grass-types. But they're also weak to Ground, Fighting and Steel. That's quite a lot of weaknesses! Conversely, they take less damage from Normal, Fire and Poison-types and they are super-effective versus Fire, Flying, Bug and Ice.

Looking at their Levels, the trainers here are a small step up from the weaklings you fought in Viridian Forest. Anyway, Geodude is exceptionally weak to Grass and Water-types. Unless you've traded, you'll only have Grass-types though, so use those if possible.

This is literally the same Pokémon used by the previous trainer. We suggest using this opportunity to train your Grass-type. That is, unless you've been power-leveling your partner or something. 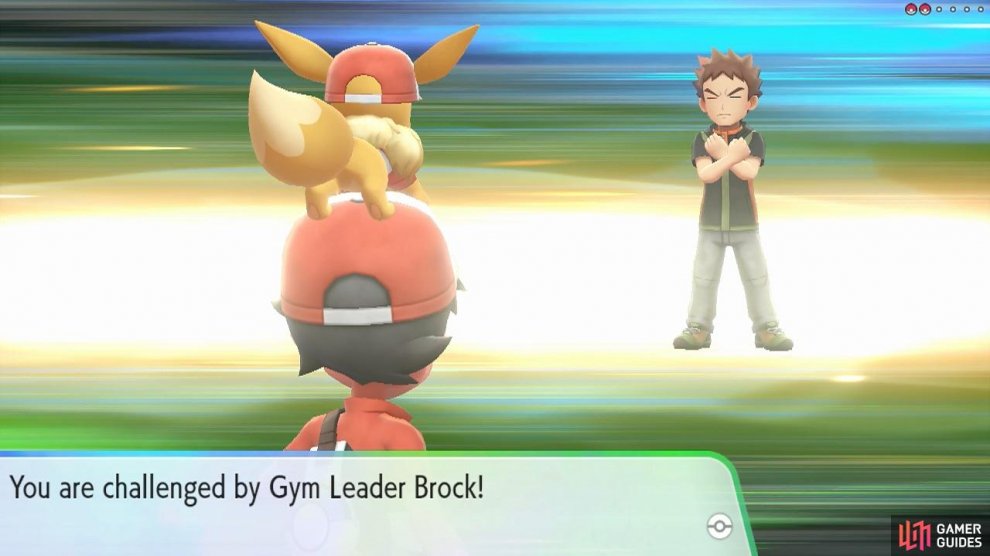 Now for the main attraction! Brock has a pair of high Level and very sturdy Pokémon. His first Pokémon, Geodude, you'll have fought previously. This one is similar, but higher Level. We recommend leading with your Grass-type so they can quickly take it out with their super-effective moves.

Definitely don't use Pikachu's Thunder Shock since it's a Ground-type. Your partner's Double Kick is worth a shot, but Geodude has pretty bulky Defense, and your partner won't get STAB (same Type attack bonus) for using it, so it likely won't do as much damage as a Grass-type would.

Next up is Onix, Brock's signature Pokémon of sorts. This one can use Bind to inflict residual damage and Headbutt that can make your Pokémon flinch if they're slow. Hopefully your Grass-type survived Geodude so they can continue to unleash their super-effective hits.

Besides Type Match-Ups, there's another factor you should keep in mind when battling Pokémon. Each move is divided into one of three categories: Physical, Special and Status. You can tell by the category icon when inspecting a move.

Succeed in smashing Brock's Rock-type Pokémon and he'll grant you the Boulder Badge as well as his new favourite TM01 Headbutt. Originally, he gave you the TM for Bide, but that move wasn't very useful in the hands of the player. If you have Eevee, teach it Headbutt ASAP as it can get a lot of mileage out of it.

The Power of Badges

Starting with the Boulder Badge, traded Pokémon up to Level 20 are guaranteed to obey your commands. Afterwards, for each new badge you obtain, the Level threshold for traded Pokémon increases by 10, until you get the eighth badge, at which point all Pokémon will obey you regardless of their Level.

Outside the Gym, somebody will stop you to say "hi". Why, it's Blue, who may recognise as Gary from the Pokémon cartoon. For those unacquainted, he's the confident grandson of Professor Oak and the original rival in Red, Blue and Yellow. In this universe however, he seems to be just another Pokémon trainer. He'll give you 5 Great Balls. How oddly kind of him.

When the coast is clear, return to the Pokémon Centre if necessary, then make your way east towards Route 3.

As you acquire new Gym Badges, the items available from all Poké Marts will slowly increase. So don't hesitate to go shopping after each Gym victory! Of note, you can now buy Great Balls, which are better than the standard Poké Balls. They're a bit more pricey, but you'll want them for those increasingly hard-to-catch Pokémon.