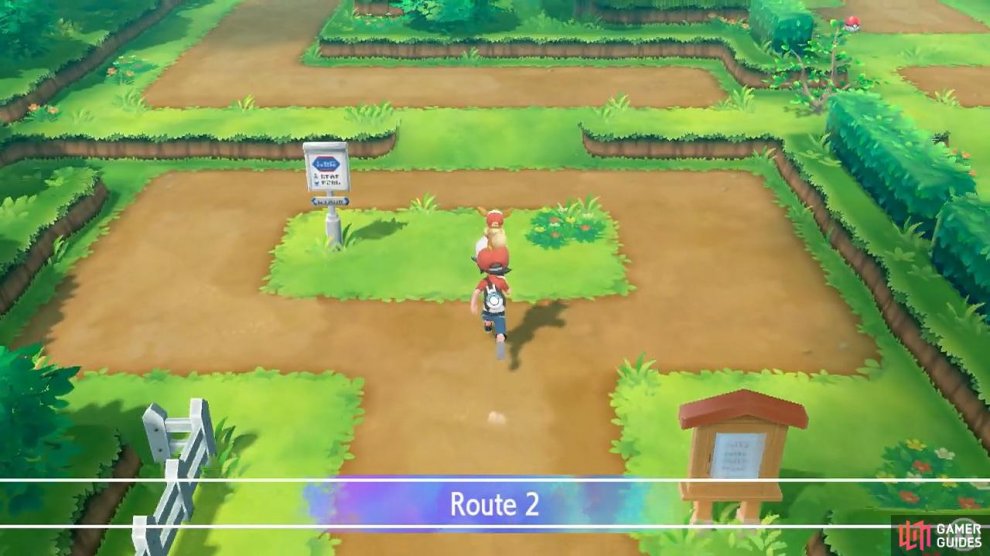 You can reach Route 2 by heading north from Viridian City. Before delivering the Parcel to Oak, a couple of misfits (did you recognise them?) were blocking the way, but they should be gone by now. Route 2 itself is fairly short and the eastern half is currently inaccessible until you find a way to cut down skinny trees.

For now, your primary objective is to follow the route north towards Viridian Forest, which is your first "dungeon" area. Before reaching the forest, you'll come to a gatehouse that separates the two areas. Continue through the gatehouse to reach the forest itself. 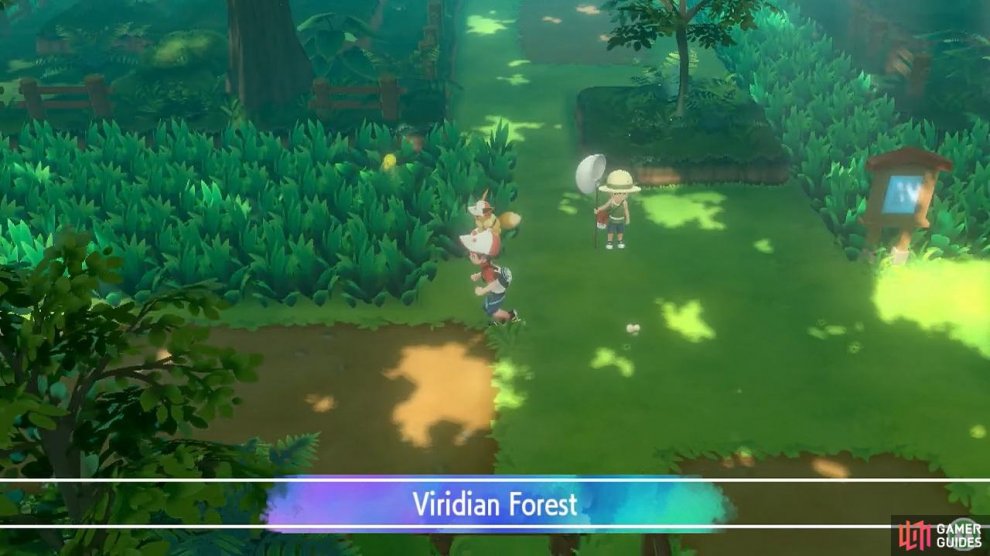 Once you're inside Viridian Forest, you can expect to encounter a host of new Pokémon, plus many Pokémon trainers eager to test their trained monsters against yours. Before you proceed, make sure you have enough supplies--Poké Balls and Potions etc.--to last you until the next town. There's nothing worse than running out halfway through!

Here's some more info that might be useful for you, especially if you haven't played Pokémon GO. Hopefully you've been trying to aim for the decreasing circle when catching Pokémon, but have you noticed that this circle can sometimes have different colours?

The colour of the second circle indicates how difficult the Pokémon is to catch. Green is easy, yellow is slightly harder and red is very hard. So if you see a Pokémon with a red circle, you know it's time to bust out your Razz Berries and better Poké Balls and whatnot!

From the forest entrance, we suggest heading west first. Around here, there is a Pokémon trainer--a Lass--standing below a tree. If you want, you can go behind the tree to avoid a battle. This will allow you to save time, but you will miss the chance to earn more experience points and, more importantly, money and extra Poké Balls.

Just a Rattata; nothing to see here. You've already fought a Rattata during your battle with Youngster Ronny and this one is hardly any different, only one Level higher.

Past Joanna, go over to the south-west corner where there's a bunch of tall grass surrounding a tall tree. It can be a little hard to see, but there's an item just below the tree. Pick it up to discover 5 Poké Balls. These will come in handy for catching all the new Pokémon here in the forest! Next, head north towards the trainer you cannot get around.

By now, you may have spotted wild Pokémon with glowing auras around them. Nope, they aren't shiny Pokémon, although if you have found one already, great job! No, these are simply size indicators. A Pokémon with a red aura is exceptional large, while a blue Pokémon is very small. These Pokémon are semi-rare and give an experience boost when caught, so are worth catching.

Well, actually, if you really want to, you can head east from Joanna, back towards the forest entrance, then go north and west to go around him. But that's probably a lot of effort for a battle that will take a few seconds to deal with! 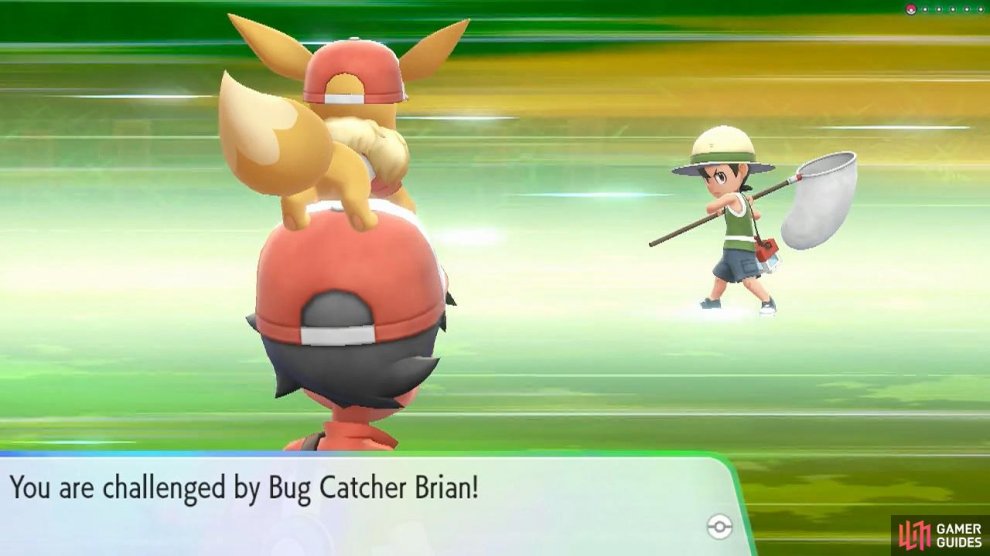 Brian has a Bug-type Pokémon that's very common around these parts. Since it's quite low Level, you shouldn't have any problems. But if you want to be strategical, Flying-types such as Pidgey and Spearow will shine here. Meanwhile, Grass-types should be avoided.

By pressing the Y button (or shaking your Poké Ball Plus), you can access your box straight from the Party menu! That means, when you catch a really cool Pokémon, you can move it to your Party straight away. Also, unlike previous games, you only have one (massive) box, instead of many smaller ones.

Carry on north from Brian and follow the tall grass west. After you go past the tree obscuring your view, there's an item sitting cosily in the dead end: a Tiny Mushroom. Items like this have no use whatsover and should be sold at a Poké Mart for monies. From here, make your way east. Soon, you should find a signpost and another item nearby: an Antidote.

If your poor Pokémon were unlucky enough to be poisoned by Brian's Weedle, you can use the Antidote to remove the poison. Anyway, go south and you'll be back at the forest entrance. That's this little corner dealt with. Head east and do battle with the Bug Catcher blocking your path.

Like Brian, Rick has bagged himself a pretty common Bug-type. Compared to Weedle, it's less of a threat since it can't poison your Pokémon, but it can temporarily slow them down using String Shot. That said, doing that will only delay the inevitable--a sad defeat for our bug-loving friend.

When you're free to go, continue east towards the south-east corner of the forest. Here, there's a patch of tall grass with an item in the centre: 3 Razz Berries. There are some rare Pokémon here, so those could be useful soon, or maybe you've already encountered those Pokémon?

Here's the last nugget we have related to catching Pokémon. After catching a Pokémon, the game will display a results screen showing a list of experience point multipliers related to your performance. These can include catching a Pokémon on your first try, getting Excellent throws, catching a big or small Pokémon etc.

You may have noticed that these multipliers stack and, if you did exceptionally well, they can get really big and greatly increase the experience points you earn. In fact, you can easily get a lot more experience compared to battling trainers, but remember that you don't earn money or Poké Balls.

Afterwards, follow the forest trail north until it branches off to the right. If you're looking for a scuffle, or wish to avoid wild Pokémon for some reason, take the right path. You'll bump into a Lass near the end. Regardless, the two paths will converge, so you can't really go wrong.

A Rattata this isn't, but it's still not enough to strike fear in opponents just yet. Assuming you've been using them, your partner Pokémon can take out this venomous bunny easily. Or if you're trying to spread the fun, any non-Grass Pokémon should do fine. 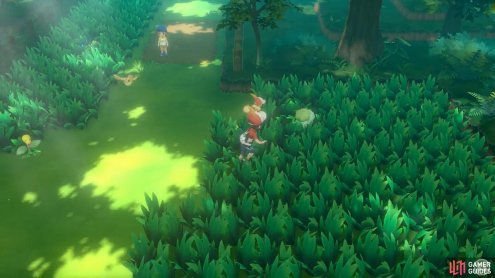 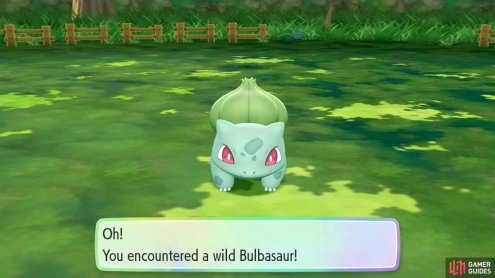 In some areas, such as Viridian Forest, you may encounter certain rare Pokémon that do not have Habitat information in your Pokédex. In this case, Bulbasaur, as Brittany alluded to. But you can also encounter the other original starters, plus the likes of Chansey and even one-off Pokémon like Snorlax and Lapras.

They will spawn just like any other Pokémon. But they aren't called "rare" Pokémon for nothing, as they have a very low chance of appearing. However, there is a way for you to make them more likely to appear. The higher your Catch Combo (which we'll get to very soon), the higher the likelihood of them spawning.

After the two paths join together, there will be a Bug Catcher guarding the path to the left. You can either run headlong into a battle with him or head right and follow the path around to reach his left. We suggest going right, as you can find a Potion above the tree by the north-east corner. Then you can always battle the trainer as you go past.

Doug has an evolved Weedle, which is kinda sturdy, but that's all it is, since it can't cause any damage to you. That said, if you're leading with a low Level physical attacker, beware as it will spam Harden to raise its Defence, reducing the damage you do to it. We suggest hitting it hard and fast with your partner or a Flying-type.

From Doug, follow the winding forest trail west. Before long, there will be a Lass standing in-between two patches of grass. There's no way to get past her without a Pokémon duel, so ready those Poké Balls on your belt!

You shouldn't be a stranger to Pidgey by this point. Just like your second battle with your rival, Pikachu can easily clip the wings of this Flying-type with its Thunder Shock. Even if you've got Let's Go Eevee, you can now catch Pikachu in the forest, so you've no excuses unless you're unlucky or harbour a disdain for the electric rodent.

While it's a good idea to focus on catching new species of Pokémon, it can be helpful to catch the same Pokémon you have already. If you keep catching the same species of Pokémon over and over, you will build up a "Catch Combo". This combo breaks if you catch (but not encounter) a Pokémon of a different species or if the targeted species runs from you.

The higher the combo, the more experience points you receive and you'll also earn candies that can boost your Pokémon's stats. Less obviously, as your combo increases beyond 11, the Pokémon you catch will start to have 2 to 4 max IVs (see the Advanced Trainer Info section) for their stats. Plus, rare Pokémon have a higher chance of spawning. 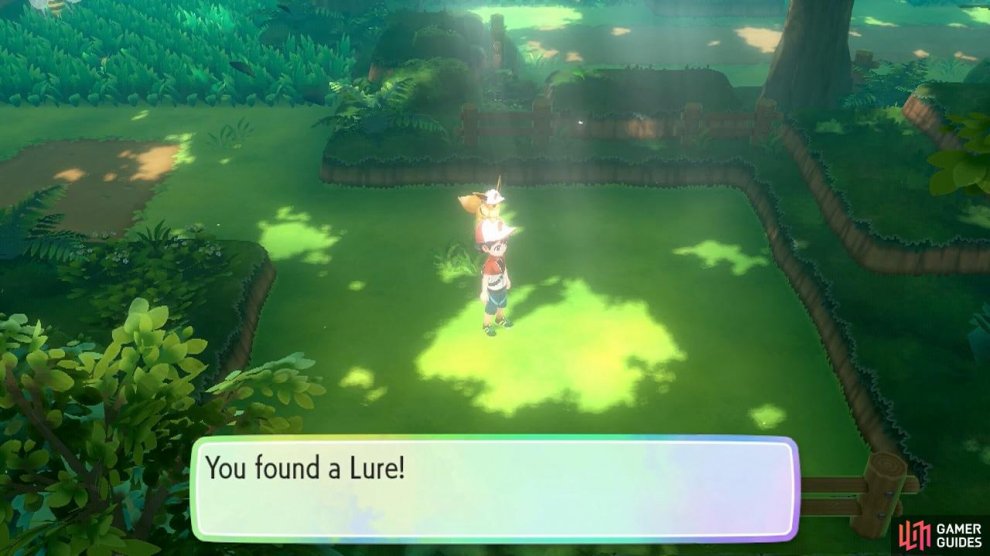 This is the final stretch. Go around the corner from Jocelyn and make your way south. You might be able to see the next gatehouse on your left. When you're free of the tall grass, and near a signpost, go south-east towards a secluded corner. In the middle is a Lure ripe for the taking. These act as inverse Repels, increasing the wild Pokémon that spawn.

Despite looking fairly straightforward on the surface, the Pokémon games tend to have a lot of hidden nuances. For instance, many items infamously have secondary effects that you wouldn't have known otherwise. In this case, Lures don't just make wild Pokémon appear more, they also increase the chances of finding Shiny Pokémon!

After pocketing the Lure, head west past the signpost, then proceed north towards the gatehouse that will take you out of the forest. Before you can get there, you'll need to fight your way past the final trainer of this area.

Sammy has an evolved and slightly more durable Caterpie. But by this stage, it should hardly pose a threat at Level 3. Who knows, your partner's Level might even be at double digits by now. Unlike the Kakuna you may have fought, this Metapod can actually fight back with Tackle. If it survives the first hit that is.

Through the gatehouse, you'll arrive in the upper half of Route 2. Here, there's a patch of tall grass by the corner, although there's nothing new there. When you're ready, carry on north to reach the next area: Pewter City.

Lots of Bug-types here! The ones here--Caterpie and Weedle--are notable in that they evolve very quickly--by Level 10 they will reach their final form. So they are somewhat useful early on. But their stats are on the low side, so we don't recommend using them for long, unless they're your favourites of course!

You can also start to find rare Pokémon. Pikachu is somewhat rare and the ones you catch here can actually evolve into Raichu, unlike your partner. The Grass-type Bulbasaur is extremely rare and worth catching since it's good against the first two Gym Leaders. You can get a Bulbasaur for free in Cerulean City if you can wait that long.