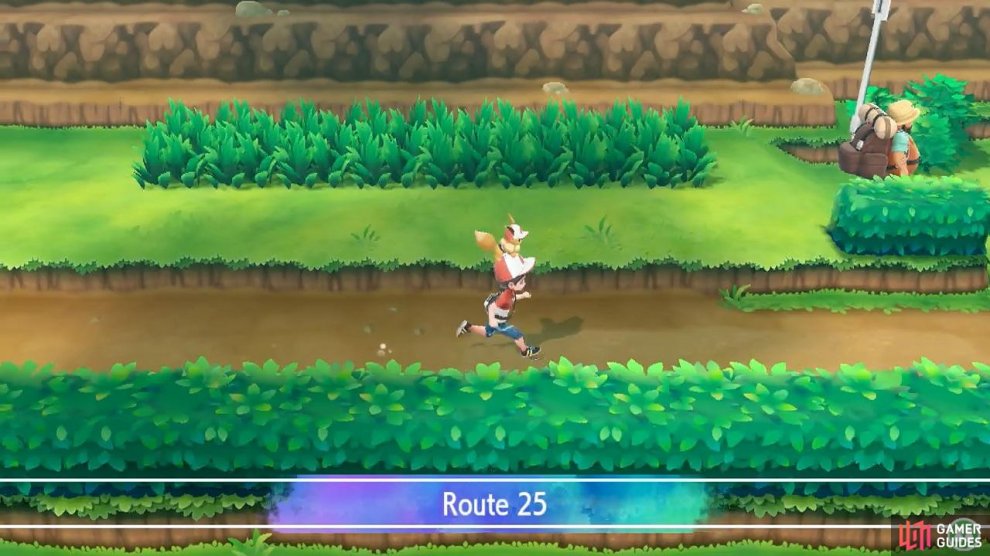 As you come from Route 24, there will be an area of high ground above you. Nevermind that for now and keep going east until you reach a whole bunch of hedges. Now you can go around the first hedge, through the gap below the Hiker, to reach the higher ground. Here, there's a stretch of tall grass and an X Sp. Def at the far end.

If you chose Team Eevee, you can encounter Meowth in the tall grass in both Route 24 and Route 25. To save time, we strongly recommend catching at least 5 Meowth before you continue. Later on, in Vermillion City, there's a woman who wants to see 5 Meowth and she'll give you a nice reward.

Next, go back towards the hedges and cautiously make your way east. Near the beginning, there's a Hiker looking to his right. If you stick close to the hedge along the centre, it should be possible to avoid his gaze.

This lucky Hiker has an Onix just like Brock. If you recall, Grass and Water-types are super-effective; Fighting and Ground-types are equally good. A partner Eevee with Bouncy Bubble can deal a lot of damage too.

Nearby to the right, there are two small grass mounds along the middle row, a trainer keeping guard above the right-most mound and another trainer towards the south, in the column between the two mounds. The above trainer won't move away, but the bottom one will.

If you want to avoid both, you'll need to go in-between the two mounds when the bottom trainer is looking right. You may also need to quickly grab the Super Potion in the small space to the left to make space for yourself to hide. That might be too much effort for some though!

Hang on a moment, your opponents' Pokémon are getting stronger faster than usual. This one is an evolved Pidgey, although it's not in its final form. Don't worry though and there's still no way it can defeat 6 of yours. Use Electric or Rock-types if you have them.

Nope, you're back to rubbish opponents yet again. Diglett, like Sandshrew, is a Ground-type and thus immune to Electric-types. Grass and Water-types are the best choices. Now, Flying-types are immune to Ground-types, but this Diglett does't have Ground moves.

Next up, there will be two trainers standing above and below a hedge near the centre row. This time, the trainer below is stuck in place, while the trainer above will look in different directions. So if you want to sneak past, you'll need to go above the hedge.

Alright, this kid has two Pokémon instead of one; that's a slight improvement. But they're both very weak Pokémon, so nothing to fear. 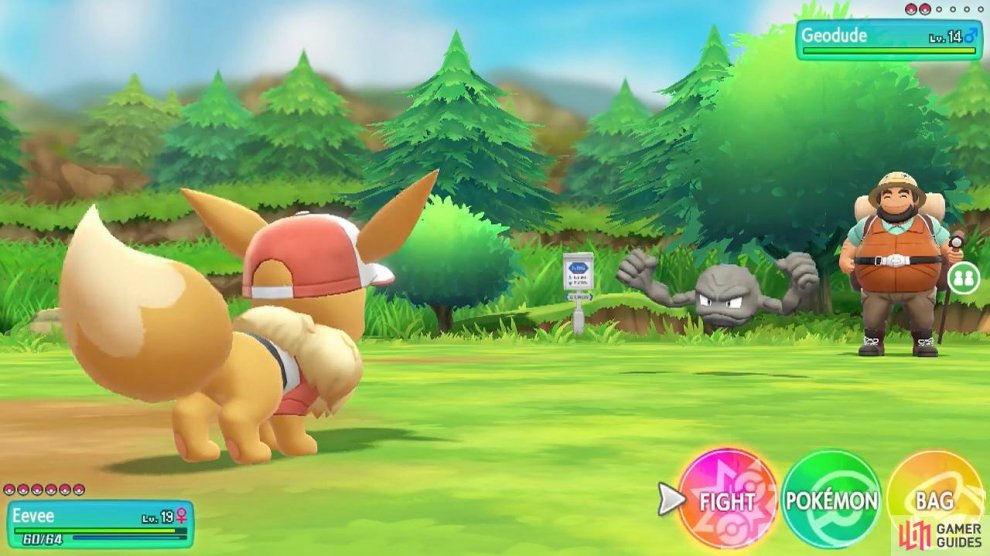 Geodude, we're sure you know how to deal with. This one can't directly attack, so take advantage by hitting it with super-effective moves if you can. Machop is super-effective against Normal-types, so keep your Eevee etc. away and send out a Flying-type if you have a good one.

Judging by its appearance, you can probably guess it's a Water-type. Therefore, Grass or Electric-types should be your vanguard for this battle. At the least, you should have your partner Pikachu or your partner Eevee with Buzzy Buzz.

Next, stand near the bottom and then walk upward to lure out the second trainer. What you want to do is make him walk up to, so that he leaves a gap in the hedges above. That way, you can go through the gap and pick up the TM16 Thunder Wave on the other side.

Otherwise, you'll have to come back later once you can cut down the skinny trees--and who wants to wait that long?

Kelsey's boyfriend has a Squirtle. Lucky guy. He's got a girl and a super rare Pokémon, but especially the Pokémon! Anyway, like Goldeen, send out your best Water-beating Pokémon. In other words, those that are Grass or Electric-aligned.

Past the lovey dovey pair is the final stretch. Along the south, there's an Ether that you can retrieve from the corner of the hedges. To the right is a Lass that you can walk around if you know what you're doing.

A pair of pretty unspectacular Pokémon. Oddish is fodder for Fire and Flying-types, while Pidgey is susceptible to Electric and Rock-types. A partner Eevee with the right moves can handle both no problemo.

Finally, there's a Fisherman who you have to fight to get past.

Of course, being a Fisherman, this guy uses Water-types exclusively. Well, the next Gym is Water-type, so this should be good practice for your Grass and Electric-types.

At the end of the path, you'll reach the house of a famous Pokémon manic by the name of Bill. Maybe you've heard of him? Before paying him a visit, there are two more things here. In the corner south-east from the house, there's a Lure that you can put in your pocket. Meanwhile, to the right of the house is a Coach Trainer. 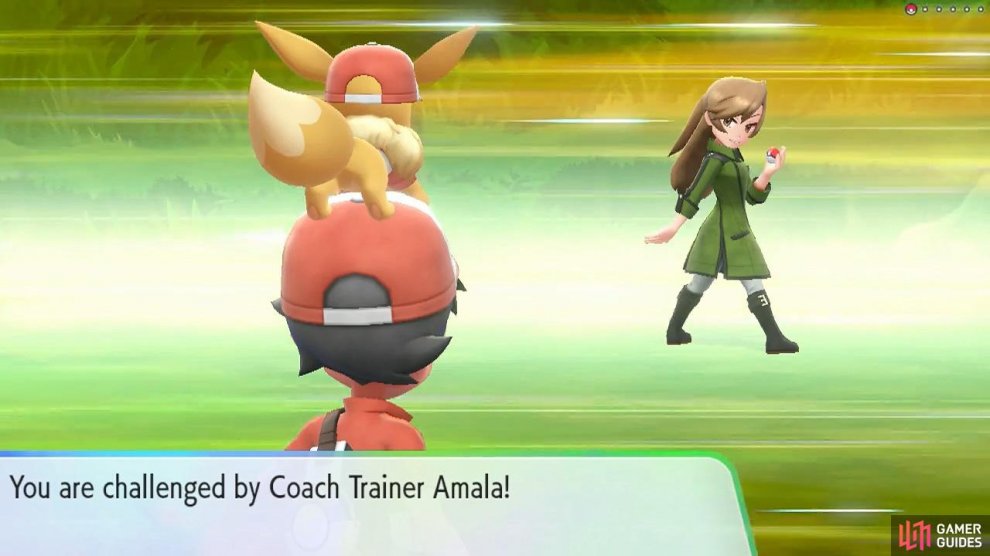 This Machop only uses Seismic Toss, which deals exactly 16 damage and doesn't apply weakness or resistance (but immunity still counts). Therefore, if you monitor your Pokémon's HP, you should be able to win this battle with ease.

Upon your victory, Amala will gift you with TM15 Seismic Toss. This move is pretty unique in that it inflicts damage equal to your Pokémon's Level. So if your Pokémon is Level 100, it will do 100 damage. Trouble is, you can generally do more damage than that.

Anyway, pluck up your courage and step inside Bill's house. The guy is in a spot of trouble and needs your help, it seems. Go over to his computer towards the left and do as he asks. Afterwards, he'll thank you by giving you a pair of S.S. Tickets. These will let you board the S.S. Anne at Vermillion City.

Now that you're done here, make your way back to Cerulean City and go and take down that Gym if you haven't done so already. If necessary, you can take a slight shortcut by following the southern-most path from Bill's house.

Exactly the same Pokémon as Route 24, at least if you're looking in the tall grass. However, there is slightly more space here, so it's a little bit easier to hunt for the wild Pokémon that you want: including that elusive Squirtle!