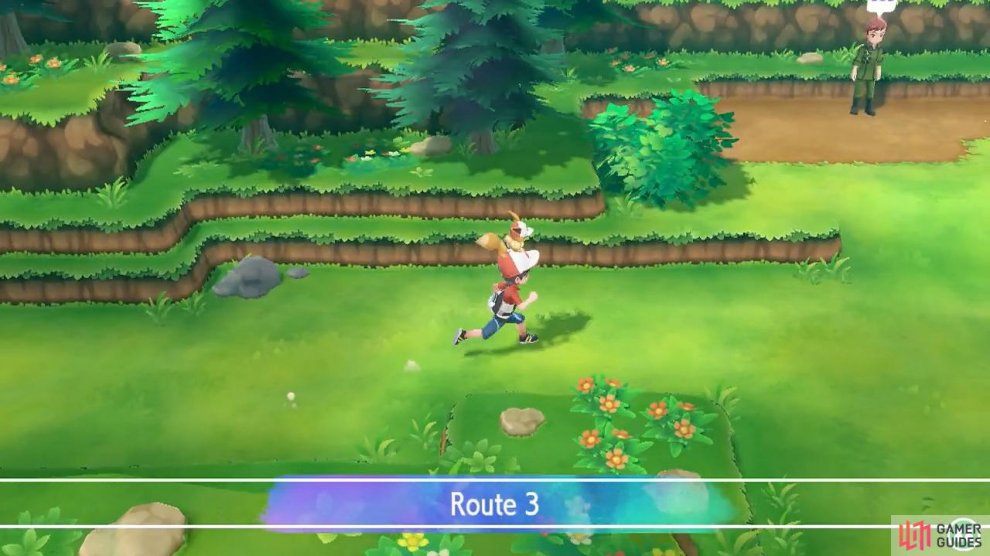 Now that you've got your first Gym Badge, your career as a Pokémon trainer of the Kanto region is really starting to feel real. From here, things are only going to get harder, but we're sure you can handle it! Or perhaps you're already an expert who's run through the Kanto region many, many times. In any case, let's go!

We briefly alluded to this during Brock’s battle. Pokémon will deal additional damage if the move they use matches one of their Types: 50% extra damage to be precise. This is called Same Type Attack Bonus or STAB for short. If possible, Pokémon should always know at least one move that has STAB.

You may have noticed that some Pokémon are capable of learning moves that don’t match one of their Types. By definition, these moves do not gain STAB. But these moves can still be useful because they allow your Pokémon to target additional weaknesses. As such, they are often called "coverage moves".

Start by making your way east along the route. After a while, there will be ledges both above and below you. Near the top is a Pokémon trainer with a speech bubble above his head. He’s a so-called "Coach Trainer", a new type of trainer that’s typically stronger than the other trainers found in the area. Defeating them will earn you a nice reward.

You can head straight towards the Coach Trainer if you want. Just be mindful of the Lass towards the east who’s watching over the path towards the south. If you’re going that way, you’ll need to battle her sooner or later. So you may as well face her head on.

Compared to the Gym trainers from earlier, this Lass shouldn’t be a problem. That said, be careful if you’re leading with Pikachu, since Electric-type moves don’t do well against the Grass-type Oddish. Flying-types like Pidgey or Spearow are ideal. But it’s just a Level 6 Oddish, so don’t worry too much.

From here, you can go past the Lass and follow the path along the south to pick up 3 Poké Balls sitting next to the bush. Or you can go north instead and chat to the Coach Trainer. Honestly, it doesn’t matter which order you do things, as you’ll probably end up doing everything anyway. 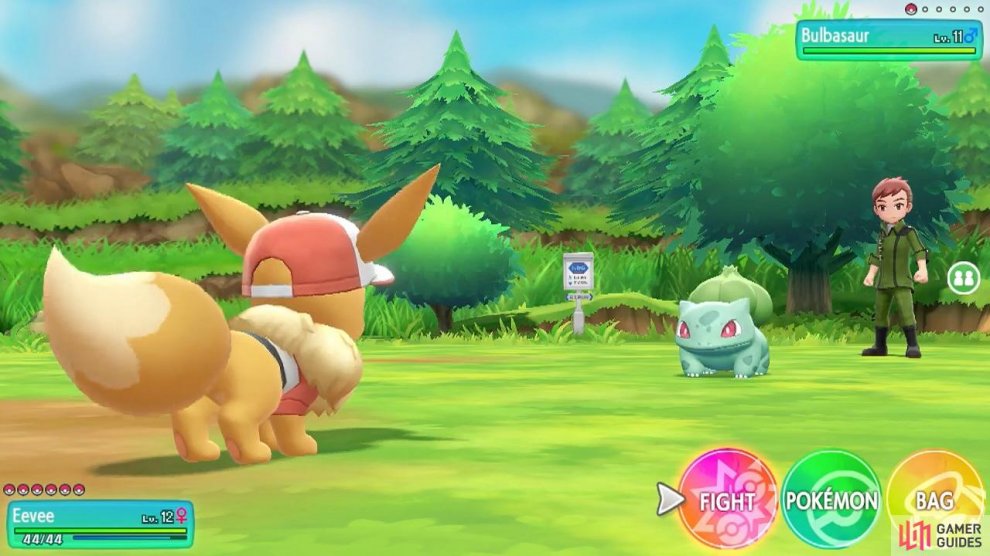 Gosh, now we’re talking! This guy is clearly on a whole other level compared to the Lass. He also has a Grass and Poison-type, but it’s higher Level and almost comparable to Brock’s. Still, you managed to beat Brock and this guy only has one Pokémon versus your six. Like Oddish, Flying-types are recommended, but it’s not hard to brute-force a victory without them.

Triumph against this first Coach Trainer and you’ll be given a Revive. If one of your Pokémon faints and there isn’t a Pokémon Centre nearby, you can use this to wake them up again. Carry on east from Kareem and there will be a Youngster standing above a series of ledges. If you time it right, you can avoid a battle when he’s looking away.

Pretty much the same deal as Pidgey. If you have Pikachu, zap it with Thunder Shock for a lightning quick victory. Otherwise, just hammer it with your non-Grass Pokémon for a slightly slower but equally valid victory. There will be time for strategy later, but not now.

Whether you choose to battle Calvin or not, you may want to jump over the ledge to grab the Potion lying on the floor. From there, you can leap down towards the corner where the 3 Poké Balls were found–or are found, if you didn’t grab them earlier. Then navigate around until you’re back near Calvin.

Moving on, go east from Calvin. After a few paces, there will be a lone Camper standing above a ledge. If you’re in a hurry or something, you can skip him by jumping over the ledge to his left. Just be aware that you will need to enter his vision should you choose to go backwards to Pewter City.

You may have fought a female Nidoran in Viridian Forest. This one is very similar, which also means it’s nothing to stress about. The main thing to bear in mind is to avoid using Grass-types; any other Pokémon should be able to handle this bunny without a fuss.

Next, there will be a long stretch of tall grass along the south of the route. Standing in the centre, near the top of the tall grass, is a Picnicker who’s looking for a fight. Similarly, you can avoid this battle-thirsty trainer by sneaking behind her, through the tall grass. 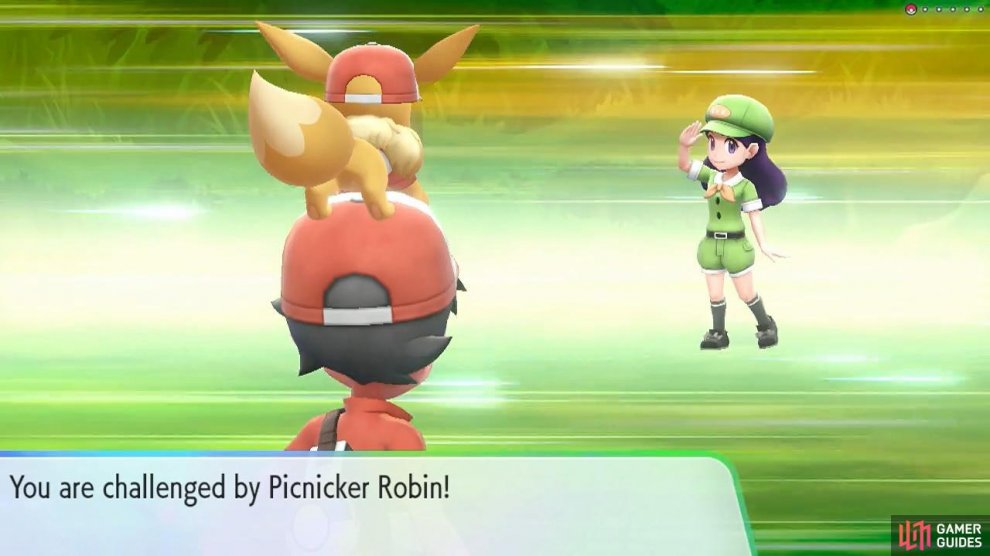 Oh and here’s another female Nidoran anyway. Nothing more really needs to be said. Ideally, you should put your Grass-types away, although you can use them if you really want to. It’s just that their Grass moves are not very effective and you don’t really want to slow down battles if you can help it.

As you begin to leave the tall grass, stop to check the bush to the right. If you look carefully, there’s a Lure hiding just above the bush. Carry on east along the earthy path. Soon, you’ll find a Youngster standing above a ledge, similar to the Camper from before.

This is pretty much the weakest Pokémon you can face, except perhaps Caterpie and Weedle. Maybe Magikarp as well. Just mow it down with extreme prejudice and move on to the next trainer.

Below the ledge, there’s a Bug Catcher standing towards the left. If you tried to be clever by jumping over the ledge to the left of Ben, well, you’ll end up having to battle the Bug Catcher to move on. So that’s why we told you to avoid Ben via his right.

Do you miss the Bug Catchers from Viridian Forest already? Nah, we thought not. Anyway, Greg’s Kakuna can actually attack with Poison Sting, so it’s not a sitting duck at least. As before, if you have any Flying-types, now’s a good time to let them loose. Otherwise, brute-force away!

We’re almost at the end of the route now! Carry on east towards another big patch of tall grass. Go over and you can pick up a Revive in the far corner. Afterwards, make your way north to reach the foot of the mountain.

Owners of Let’s Go Pikachu have a bit more variation, as they can encounter the Ground-type Sandshrew and the Fighting-type Mankey. Sandshrew could be useful for the Electric Gym up ahead, although there will be more Ground-types in Mt. Moon and beyond. Meanwhile, Eevee owners can catch Ekans.

Rare Pokémon enthusiasts will be interested to know that Charmander is a rare spawn here. This popular Fire-type will be useful for the Grass Gym, although if you can’t find it here, don’t fret. Because you can receive a Charmander for free near Cerulean City.