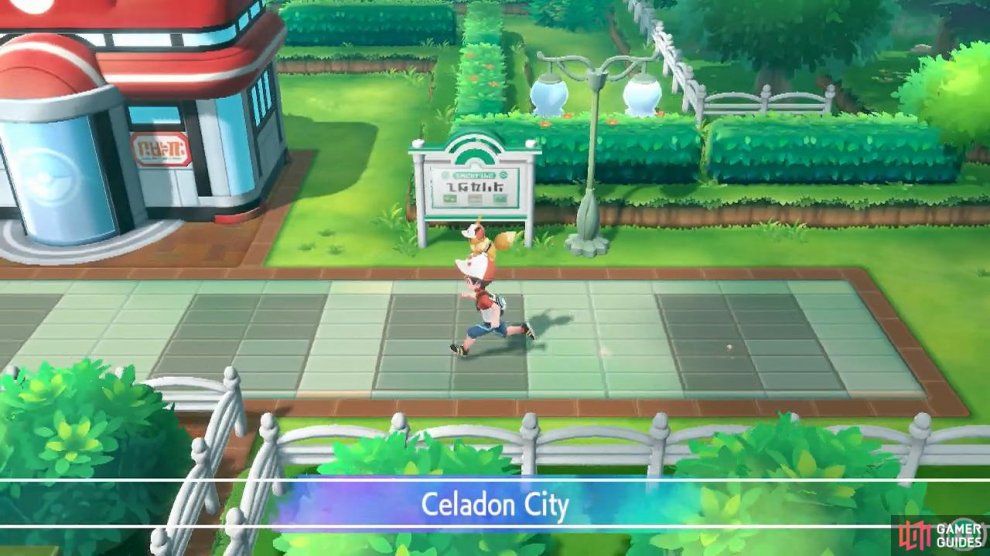 Celadon City is one of the largest cities in the Kanto region, perhaps second only to Saffron City. So you may find there's a lot to see here! From the Route 7 entrance, there's a Pokémon Centre immediately nearby. Inside, there are three people of interest. By the north-west corner is Madam Celadon, a fortune-teller.

If you pay Madam Celadon 10,000 Poké Dollars, she'll guarantee all the Pokémon you catch today will have a certain Nature. She'll ask you to choose from 5 flowers two times.

From top to bottom, these flowers represent your Pokémon's stats in the following order: Attack, Defence, Special Attack, Special Defence and Speed. The first flower you choose determines the stat to be increased, while the second flower is for the decreased stat.

So if you want, for example, Timid (increased Speed, but decreased Attack), choose the bottom-most flower, followed by the top-most flower.

Alolan Sandshrew is Ice/Steel, while Alolan Vulpix is Ice and gains Fairy when it evolves. There aren't many Steel and Fairy-types in Kanto, so they're both good choices. Just beware of their double weaknesses.

Last, but not least, there's a red-uniformed man near the north-east corner who can teach your partner some more special moves!

Floaty Fall is a useful move for Pikachu, as it lets it hit Grass-types that normal resist it, as well as damaging Bug and Fighting-types. Baddy Bad allows Eevee to hurt Ghosts and Psychics and puts up Reflect. Finally, Glitzy Glow hurts Poison and Fighting-types and raises a Light Screen. 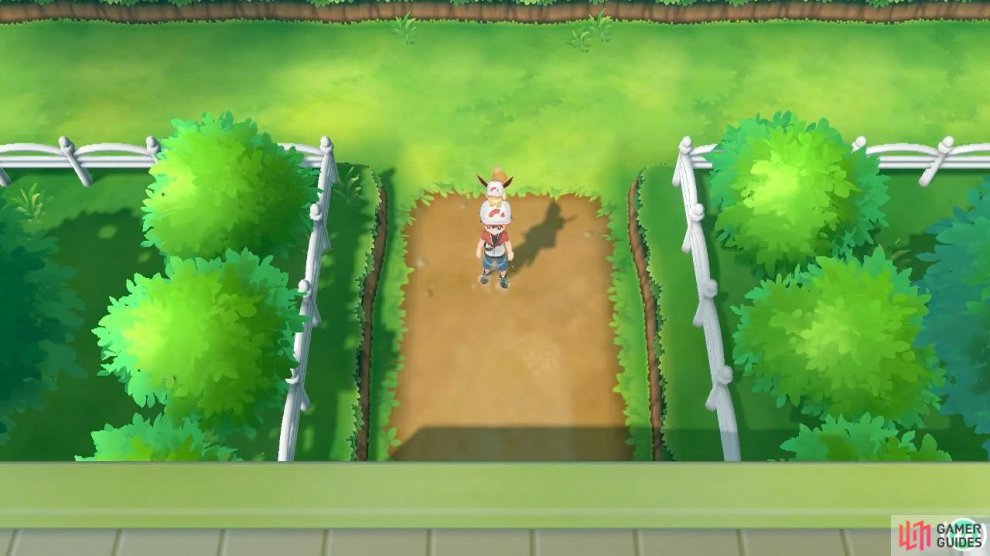 Back outside, follow the slightly narrow path to the right of the Pokémon Centre. When you reach the very top, head east first to grab the Nugget that you may have saw earlier. Then go west. Keep going to the very end to find a Rare Candy. Then double back and enter the back of the building, to the left of the branch in the path.

You'll emerge in an enclosed area in the Celadon City Condominiums. Follow the stairs all the way up to the roof. Up there, there's a penthouse that you can visit. Go over to the wall above and pick up the TM44 Play Rough. This is a physical Fairy-type move that can cause flinch. Then backtrack to the Pokémon Centre entrance.

From the Pokémon Centre, head all the way west, past the man and his Poliwhirl. When you reach the front of the Celadon City Condominiums, you'll bump into Brock. He'll give you some Pewter Crunchies and a cup of Tea. The latter is very important, because it lets you go through the four gatehouses that lead to Saffron City.

Once Brock's gone, feel free to enter the front of the Condominiums. The first floor and second floor are nothing special. Upstairs on the third floor, you can visit the GAME FREAK offices. Right now, they've got nothing to give you though. When you reach the roof, you can grab 3 Health Candies near the extractor fan.

West from the Condominiums is the Celadon City Department Store. This is a multi-tiered shopper's paradise and well worth a visit! The first floor is the reception. From here, you can walk up the stairs or take the lift if you want to reach a higher floor faster. The second floor has a TM shop (top counter) and Poké Mart (bottom counter).

Looking through the TMs, there isn't really anything that's essential, but feel free to use your own judgement. Next, the third floor is a cute gaming shop. You can't buy anything here, but it's a cute place to explore. Chat to the guy managing the shop to receive TM03 Helping Hand. This move boosts an ally's move during Double Battles.

Double Battles, Where? Right now, you might be thinking when's the last time you had a Double Battle in this game? Well, Jessie and James is the only natural Double Battle thus far. However, if you trigger co-op mode, you can force a Double Battle for every other trainer you battle.

On the fourth floor, you can buy the following evolution stones: Fire, Thunder, Water, Leaf and Ice. You can get all of these for free, but if you're impatient or need extras, go nuts! Of note, the Ice Stone can be used to evolve Alolan Sandshrew and Vulpix. Finally, the fifth floor is where you can buy accessories for your partner.

There's a lot to choose from, including several varieties of hats, glasses and bows. You might also spot a Crown going for 999,999 Poké Dollars. Good luck with that one... This is the last floor, but you can keep going up to the roof. Up here, there's a vending machine offering Fresh Water, Soda Pop and Lemonade.

Buy at least one of each, then speak to the young girl standing to the left of the vending machines. Give her one of each drink to receive the following TMs: TM06 Light Screen for Fresh Water, TM09 Reflect for Soda Pop and TM07 Protect for Lemonade. That's everything here; when you're done shopping, exit the department store.

If you carry on west from the fountain, you'll reach Route 16. Attempting to traverse this route is currently impossible since a second Snorlax is sleeping in the middle of the road. For now, head east from the bottom of the fountain. Go past the pool of water and enter the first building on the right: the Game Corner. 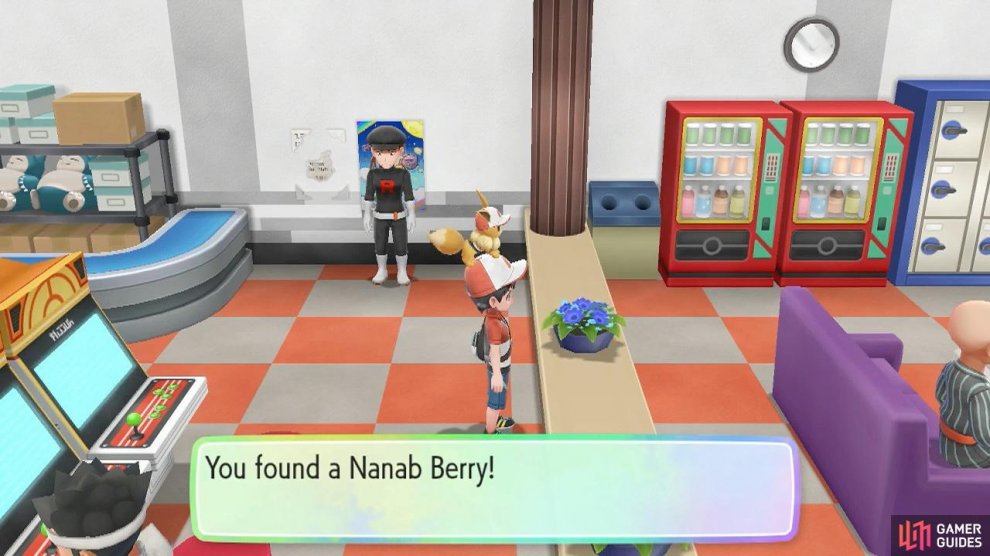 Assuming you enter from the left entrance, head left a few paces to eavesdrop on Jessie and James. We're assuming you climbed to the third floor of the Pokémon Tower, to trigger their return here. Anyway, continue left for a bit. Search the far south-west corner for a hidden item. Next, go over to Jessie and James.

Hidden Items in the Game Corner

The items you'll find in the Game Corner are again randomly selected, this time from a selection of berries and candies. If you come back another day, you may find another bunch of five items. Well, people are prone to dropping stuff when they're engrossed in a game!

Sneak past the terrible duo and search the red cabinet above them for a second hidden item. Next, head right, towards the counter. Walk a few paces south from the nerd behind the counter. Search between the first two seats for a third hidden item. Return to the counter and continue heading right.

A fairly standard Pokémon used by Team Rocket. In addition to Super Fang, this Raticate can use a STAB-boosted Hyper Fang. Just monitor your Pokémon's health, especially if they're on the squishier side, and you should do fine.

After scaring away the Grunt, check the Rocket poster that he was guarding to discover a secret button. Pushing this will reveal the entrance to the Team Rocket Hideout in the north-west corner. If you're ready to infiltrate Team Rocket, head on inside. Otherwise, go and make preparations and/or explore the rest of the city.

If you're leaving the Game Corner, carry on east for a while. When you reach the end, there's a skinny tree that you can Chop Down. Past it, search the top of the narrow path for 5 Razz Berries. From here, follow the path downwards, then head west when you reach the wooden bench. Continuing along the narrow path will lead to an embarrassing dead end.

Along this final street, there's a hotel, Team Rocket occupied house and restaurant. If you keep going, and head north after the corner, you'll reach the pool of water. From there, you can head east to revist the Game Corner or carry on north-east to return to the Pokémon Centre. Otherwise, head south from the house with Team Rocket members inside.

Use Chop Down to get rid of the skinny tree blocking the way, then follow the path west. This will take you to the Celadon City Gym. It's up to you if you wish to challenge the Gym now or wait until after you've completed the Team Rocket Hideout. Both are a similar difficulty, so it doesn't matter too much which order you do them in, but you will need to do both.