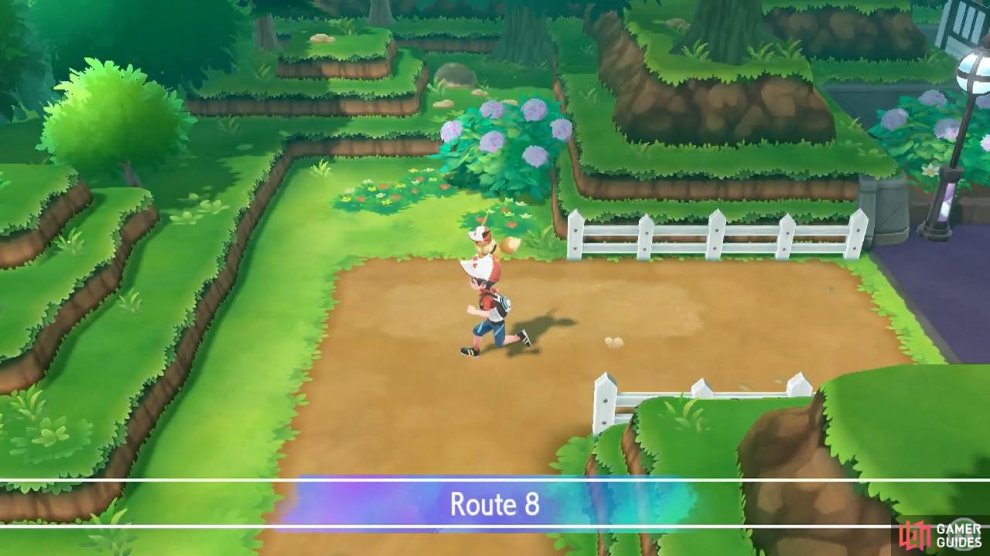 Clefairy is a rare Fairy-type that's weak to Poison and Steel. If you've got none of those, don't worry, since it's unevolved and not terribly strong. This one can use Metronome, which triggers a completely random move. Hopefully a rubbish one like Leer and not a devastating one like Hyper Beam!

Past Aubrey, there's a fenced in area to the left. You can enter by cutting down the skinny tree with the Chop Down Secret Technique. Here, there's a patch of tall grass with a lone trainer in the centre and a Fire Stone to her south-west. The next Gym is Grass, so this could come in useful.

Kyla can be quite a tricky trainer. Her Kadabra is an evolved Abra and it packs a powerful Psybeam. Dark-types are ideal, but Ghosts and Bugs are good too. Machoke is an evolved Machop and it can use Rock Slide to hurt Flying-types. As such, Psychic and Fairy-types are recommended.

The two main candidates for the Fire Stone are Growlithe (Let's Go Pikachu) and Vulpix (Let's Go Eevee). As you may know, using a Fire Stone will prevent most Pokémon from learning new moves. For Growlithe, we recommend waiting till Level 38 so it learns Flare Blitz. Vulpix can evolve as early as Level 24 once it learns Flamethrower.

From here, you can continue west from the fenced in area, exiting by cutting down another skinny tree with Chop Down. This will allow you to skip a couple of trainers. Or you can go back towards the first Beauty and head north from her left. This will lead you towards a Gamer. 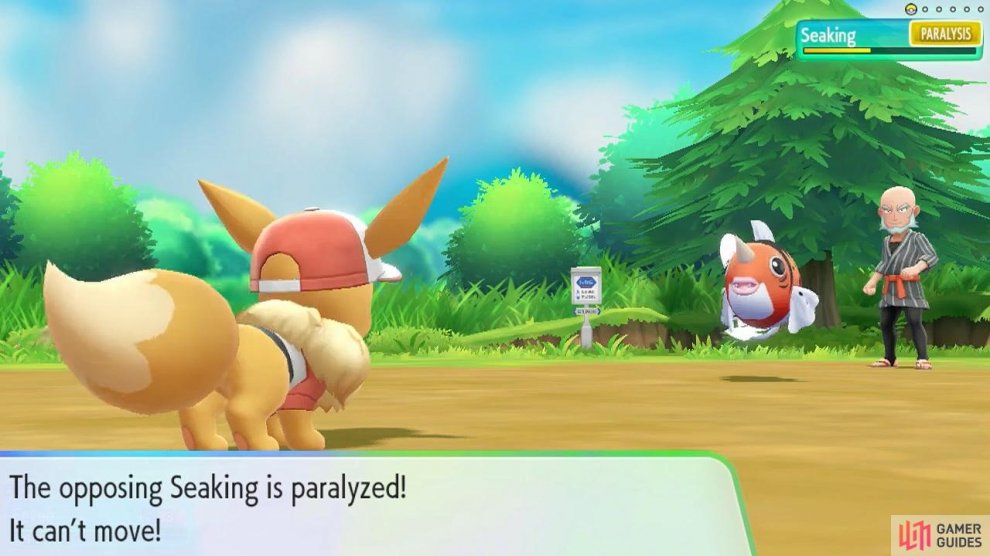 Seaking is an evolved Goldeen; it's still a Water-type, so Grass and Electric-types will deal a lot of damage to it. Beware of its Horn Drill, which has a chance of inflicting a one-hit KO. Try to hit it hard and fast before it gets a chance to use Horn Drill too much.

Moving on, head west from the Gamer. After a few paces, search the bush along the top, near what we're guessing is a streetlamp, to find a hidden stash of 3 Silver Pinap Berries. Then after that, continue following the path west to bump into a Super Nerd.

This battle is a lot less dangerous compared to the previous one. Koffing is a straightforward Poison-type, so Ground or Psychic-types are good to use. Steel-types are also worth considering, since they're immune to its Sludge.

Glenn has evolved his Eevee into Jolteon. Because it's an Electric-type, Ground-types are highly recommended. Grass-types are OK, but they're liable to get hit with Thunder Wave.

Carry on south from Glenn. You'll go past the left side of the fenced in area. Near the next corner, there's another Gamer ready to pounce you.

If you've fought all the Gamers so far, you've probably figured out the pattern. This Rhyhorn also has Horn Drill, which will deal a one-hit KO if it lands or no damage at all. Therefore, this battle is all done to luck, but you'll have a better chance using Water or Grass-types.

Past Stan, continue making your way west. At the next corner, there are two Lasses standing by the side of the path above. If you want, greet them for a Pokémon duel. We'll talk about the Lass on the left first, then the one on the right. 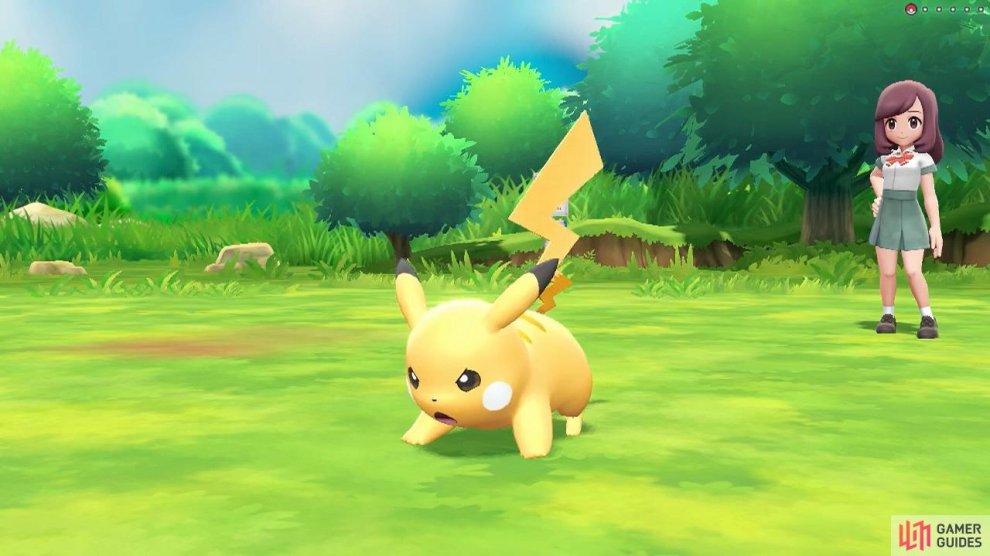 Now's your chance to beat up the Pokémon mascot again. Since it's unevolved, it should be easy prey for you. That said, it does have a fairly strong Thunderbolt, so try to use a Ground-type if you have one.

Somebody sure likes Meowth a lot. We wonder if she'll grow into a crazy cat lady? Anyway, all three Meowth are the same. The main things to watch out are Fake Out, which causes a flinch on turn 1, and Feint, which has increased priority.

Further north, there's a Super Nerd standing in-between the next gatehouse and the entrance to another Underground Path.

Ground-types will have a field day since their moves do 4x damage. Fire and Fighting-types are also very good.

Heading into the gatehouse is pointless right now, as the guards won't let you through. So the only way forward is the Underground Path entrance to the right of the Super Nerd. Before heading inside though, go right from the entrance, then jump over the ledge. Pick up the Big Mushroom, then leap over the next ledge and go back around.

There aren't any brand new Pokémon here, but if you are really lucky or patient, you can catch a couple of evolved Pokémon: Arcanine (Let's Go Pikachu), Ninetales (Let's Go Eevee) and Kadabra. Only Kadabra is really worth catching, since the Fire-types won't have any good moves.