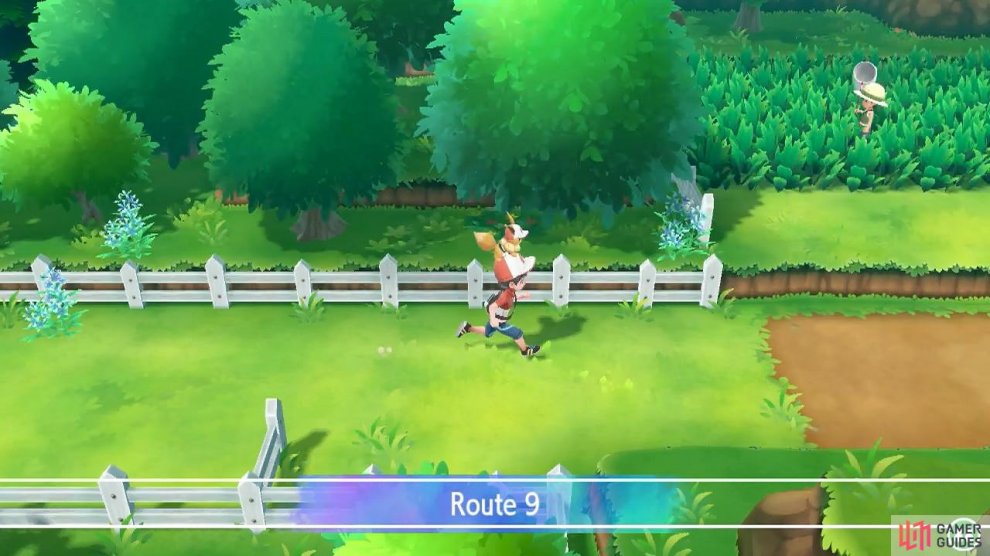 The journey to the next town begins here--and it's quite a long journey! There won't be a Poké Mart for ages, so stock up on Poké/Great Balls and any recovery items if you need to. From the entrance, there's a trainer guarding a ledge that you need to drop down from.

You should be no stranger to Eevee--you either have one as a partner or your rival does. Since it's a plain Normal-type, Fighting-types are recommended, but pretty much anything that's not a Magikarp should be fine.

Gloom is an evolved Oddish, although it's yet to reach its final form. Like its predecessor, it's Grass and Poison and thus weak to Fire, Flying, Ice and Psychic. Chances are you'll have at least one of those.

After defeating Alicia, leap over the ledge. From here, you can either head straight to the east to avoid a Hiker or you can jump down the ledge towards the left, so you can grab a Super Potion. But in doing so, you'll need to battle the Hiker to continue along your path.

Another Onix, just like Brock's. Water and Grass-types are highly recommended since their moves do 4x damage. Fighting also has a good chance. If you could defeat Brock, there's no reason you'll lose here.

Further east, there will be mountain ledges and a signpost. Go up and follow the very top of the route west, towards the tall grass in the far corner. As you step into the tall grass, there's an Ether sitting just below the grass, by the bottom-right. Near the left side, there's a trainer looking around.

Fire and Flying-types have a major advantage since their attacks do 4x damage. Rock-types are also effective, but may take heavy damage from Absorb. If using a neutral Pokémon, be wary of its Sleep Powder, which can render your Pokémon unconscious.

At any point, if you want to return to Cerulean City, you can do so by jumping off the ledge below and heading west back towards the route entrance. Otherwise, make your way east back to the area with the signpost, then continue east from there.

Over here, there will be two paths that you can follow: one near the centre and one along the bottom. If you're hungering for a battle, head along the bottom-most path. At the far end, there's a Hiker you can challenge. If you jump down from above later on, you'll also end up around here. 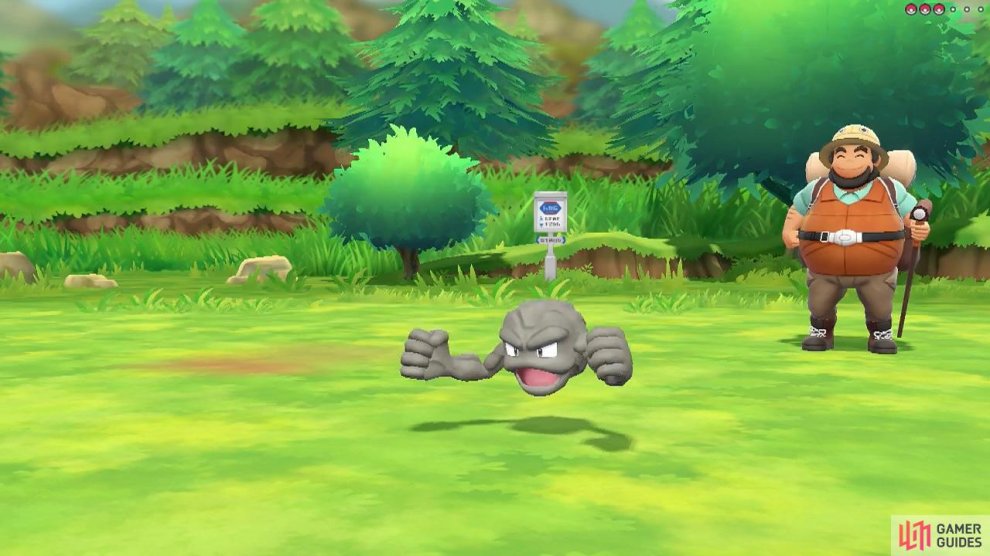 What's better than a Geodude? Three Geodude, apparently. By now, as soon as you spot a Hiker, you should know what Pokémon to send out: a Water or Grass-type. Or at least a strong Pokémon with those moves, like a partner Eevee.

Next, head along the path above the bottom-most one. If you fought the Hiker, you'll need to go backwards to climb back up. When you reach the end of this path, there will be a trainer standing guard above.

Pikachu users should switch out their electric rodent at the beginning. Instead, use Water or Grass-types if available. Raticate can surprise you with Super Fang, which halves HP, and Quick Attack. Try not to fight it with low HP mons.

After breaking through, you may want to head west. On this side, there's a Youngster and 5 Poké Balls a short distance from him, above a ledge. There's also a small patch of tall grass, but you'll probably be hard pressed to find any good Pokémon in there.

Again, Diglett is unfriendly for Pikachu users and target practice for Water and Grass-types. Fearow is an evolved Spearow, but this one is more intimidating than it's powerful. For this overgrown bird, Electric and Rock-types are recommended.

Next, go up from Camper Drew and pick up the Super Potion in the nearby corner. After that, make your way east along the very top of this route. Soon, there will be burly trainer standing guard. This one can be avoided if you time your movements right.

We've warned Pikachu users; now it's time to warn Eevee users. Against a Fighting-type like Mankey, Flying, Psychic and Fairy-types are the best choices.

Jump over the ledge to the right of Brice, then slow down. As you move south, there's a trainer towards the left side who may turn around to look in your direction.

Goldeen is pretty straightforward coming from Misty's Gym; stick with Grass or Electric-types if possible. Pidgeotto is the middle evolution of Pidgey. Like Fearow, Electric and Rock-types are the safest choices.

Around here, there are two ledges nearby, towards the left and towards the right. Right now, there's no point in jumping over them, unless you want to go backwards to Cerulean City. If you do want to go back, note that the right-most ledge will force you to go through a Hiker's line of sight. Otherwise, continue east.

There's nothing particularly special here, although you can catch some evolved Pokémon: Nidorino, Nidorina and Fearow. If you're not using them in your team, catching them will save you the work of evolving them yourself.