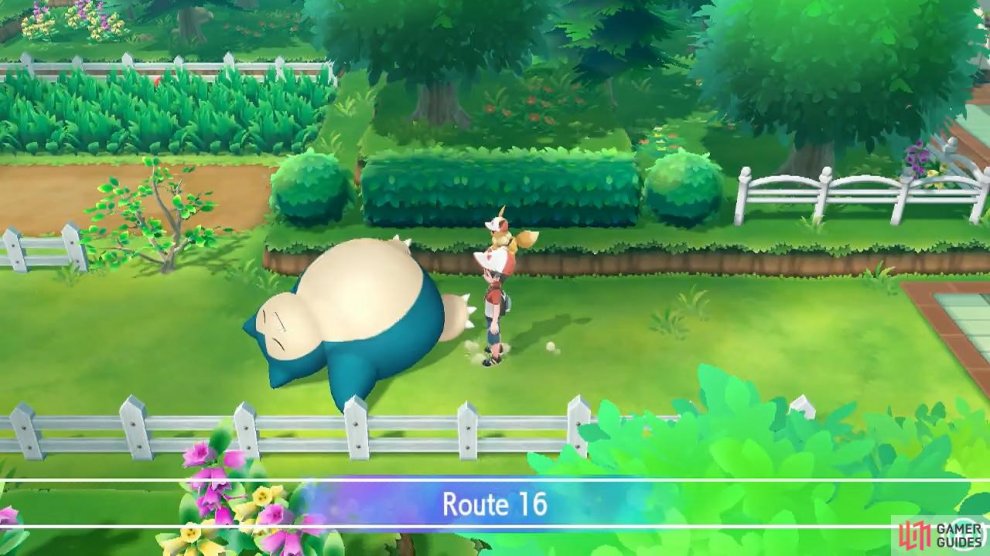 This is the entrance to Pokémon Road, a place designed for Ride Pokémon to travel. In another timeline, it was Cycling Road instead, but it seems the people here don't enjoy cycling as much. Anyway, as soon as you enter, there's a gigantic obstacle in the way: a sleeping Snorlax. Hopefully you have the Poké Flute to wake it up. If not...

If this is your first time waking up Snorlax, Mr. Fuji will come running in to warn you. Wait, did he really follow you all the way here from Lavender Town? Apparently Snorlax get quite aggressive when you wake them up. Why are we not surprised?

This is one of the few times you can actually battle a wild Pokémon. Unlike normal battles, you've got a 5 minute timer that will keep counting down. If time runs out, you'll lose your chance to catch Snorlax for now. As such, we recommend saving before proceeding. In addition, your aim is to KO the Pokémon.

This is pretty much the exact same Snorlax as the one found on Route 12, but it receives a Defence boost at the start of the battle. Which can be slightly problematic. You see, Snorlax is really bulky, especially against special attacks. Now that it has increased Defence, it's somewhat tanky against physical attacks too.

The main problem is never trying to survive Snorlax, but trying to take down its HP before time run outs. Despite having just woken up, Snorlax loves to use Rest to restore all of its HP and fall asleep for 2 turns. If you can't KO it within 2 or 3 turns, you run the risk of it using Rest again to waste time. As such, Fighting-types are strongly recommended.

Alternatively, if you don't think it's cheating, you can summon a Player 2 to assist you during battle. More hands make light work, as they say. After defeating Snorlax, you can capture it like normal. Definitely break out your Ultra Balls if you have any. You could also borrow Player 2's help as well (even if you're playing by yourself).

Once you've gotten Snorlax off the road, you can begin to head west to the rest of Route 16. Nearby, there's a skinny tree that's begging to be chopped down. On the other side is patch of tall grass near the top. If you look carefully, you can find a PP Up hiding in the tall grass, right near the fence at the back. 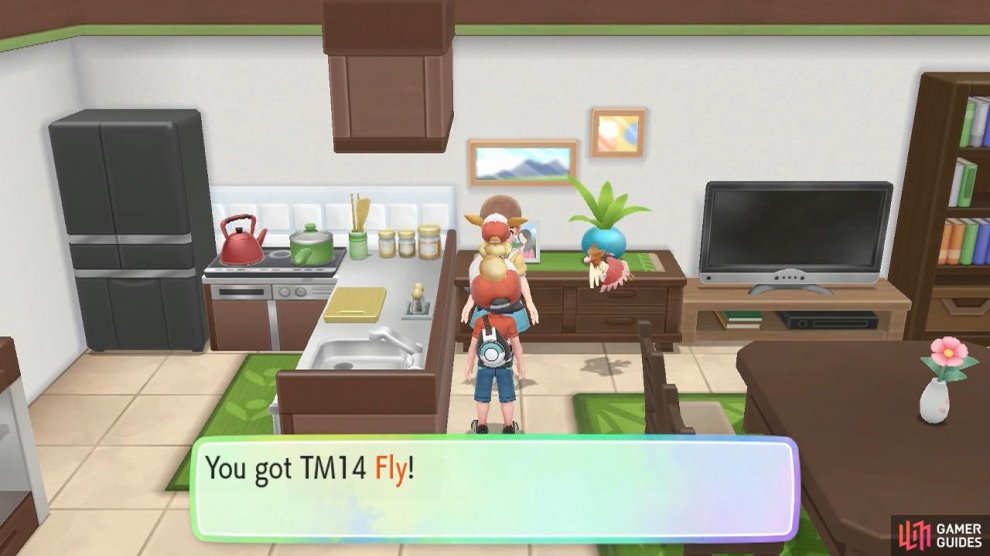 From the tall grass, head west to a gatehouse dividing the route. Through the gatehouse, you'll emerge in the north-west corner of the route. Here, there's a house along the top. Go inside and you can receive TM14 Fly from a shy lady. Similar to Surf, this used to be a HM, but it's no longer needed thanks to Sky Dash.

Outside, there's an unruly gang to the left of the house. It might be a good idea to deal with them before they cause any problems. We'll begin with the guy on the right, then the one on the left and finally who we're guessing is their boss man.

A Ground-type could be very useful here. Lao's Onix can use STAB-boosted Earthquake and Rock Slide. Water and Grass-types are also recommended. Meanwhile his Muk can use Toxic to inflict deadly Poison. Steel-types are useful as they're completely immune to its moves.

Hideo's Arbok knows Glare, which can inflict instant paralysis. A strong and speedy Ground or Psychic-type would be great here. As for his Fearow, it can use Mirror Move to copy your last move and Roost to heal, but it lacks any real offensive presence. 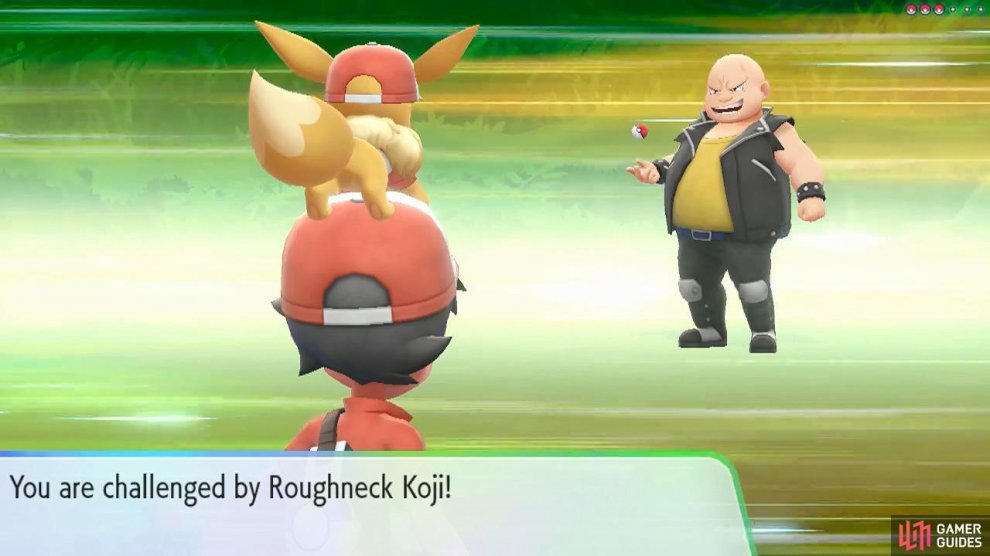 Koji's Raticate knows Hyper Fang, which is a fairly strong Normal-type move. Meanwhile, his Koffing has Toxic and Self-Destruct, so aim to dispose of it quickly. Finally, his Rhyhorn has Megahorn to hurt Psychic-types. Their other moves you've probably seen time and time again.

Go back to the start of Route 16, then head directly west into the main gatehouse. Upstairs, if you've caught 40 unique Pokémon species, you can receive a gift of 30 Ultra Balls from Oak's assistant. Well, you need 50 species to enter the Fuchsia City Gym, so 40 should be a given. If you haven't even got 40 yet, what are you doing?!

Exit the gatehouse via the west. Outside, you'll reach the main part of Route 12. Keep going west until you reach the fence at the end. Nearby, there are 3 Great Balls near a windmill. Go down a few paces and head east. You'll go past a Camper standing near a gap in the fences. Grab the Super Potion by the corner.

Now go through the gap in the fences below. If you keep to the far right, you can actually avoid the Camper's gaze. Or you can go and battle him, of course.

A pair of pretty weak Water-types, but we suppose Psyduck has its charms. Anyway, both Psyduck can use Psybeam, but they're not Psychic-types so they won't benefit from STAB. Smack them silly with your Grass or Electric-types.

Through the gap, you'll reach Route 13. That was quick.

The tall grass in the northern fenced-off section is the first place you can encounter the Normal/Flying Doduo and its evolved form, Dodrio. There's nothing really remarkable about these birds, but you'll want to catch both to fill up your Pokédex.