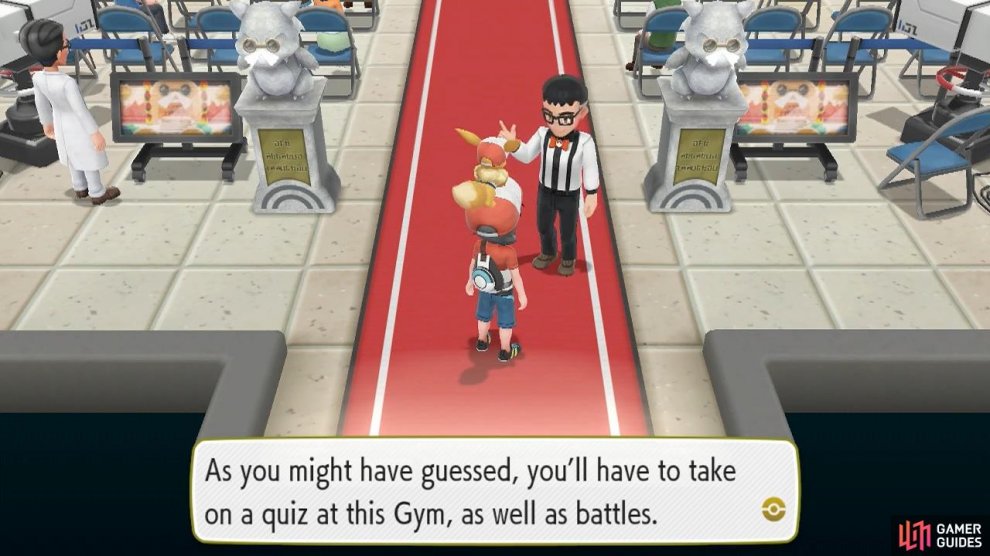 Have you ever wanted to be on a (cheesy) Pokémon quiz show?

To enter this Gym, you’ll need the Secret Key, which is found deep within the nearby Pokémon Mansion. The Gym itself is quite different compared to most other Gyms. After stepping inside, speak to Blaine, the Gym Leader, to begin the Gym challenge.

Fire-type Pokémon are weak to Water, Rock and Ground. They are strong against Grass and Ice Pokémon, and they resist Fire, Grass, Ice, Bug, Steel and Fairy. Water and Rock-types are usually the best counters, since they resist Fire.

You’ll participate in a Pokémon quiz. If you answer the question correctly, you can move on. Otherwise, if you answer incorrectly, you must battle a trainer. This will continue until you’ve answered 5 questions. After the 5th question, you can battle the quiz master, Blaine, himself.

Now the questions themselves aren’t too hard and, even if you don’t know the answer, you can easily guess. If you really wanted to, you can purposely fail the quiz to battle the trainers.

As soon as you begin the quiz, you won’t be allowed to take breaks. So that means if you do battle any trainers, you won’t get any time between battles to heal your Pokémon or change their moves etc.

Question number 1 asks which of these two Pokémon is known as the “Spitfire Pokémon” (in the Pokédex). The correct answer is “Magmar”. If you picked “Growlithe”, get ready to fight!

This is the middle evolution of Charmeleon. For attacks, it has Fire Spin to trap its opponent and inflict a little bit of damage each turn, Slash to gamble for a critical hit, and Dragon Rage to deal 40 damage. Since it hasn’t reached its full potential, it should be an easy foe.

Quinn has an evolved Vulpix. This one can use STAB Flamethrower, and Quick Attack to try and go first. The best counters are Rock, followed by Water and then Ground.

Question number 3 asks what happens when a Steel-type move is used on a Fire-type Pokémon. If you studied the Type Match-up, you’ll know it’s “Not very effective”. But you can pick “Super effective!” to earn yourself another battle.

Magmar is a Pokémon you’ve probably bumped into in the Pokémon Mansion. Derek’s Magmar has a variety of Fire-type moves including Fire Spin. Plus it can use Confuse Ray to make your Pokémon dizzy. Water or Rock-types are recommended.

Question number 4 is basically a joke question. Blaine wants to know if TM28 teaches the move Tombstony. We understand there are a lot of weird-sounding moves in Pokémon, like Baddy Bad, but Tombstony? C’mon. Pick either “False” or “What’s that?!” to continue unscathed. Or play along and pick “True”.

Dusty’s Growlithe can use some pretty strong moves–most notably Flare Blitz. But it’s unevolved, so there’s a limit to how much damage it can do. Meanwhile, his Rapidash is a bigger threat. This evolved Ponyta can conjure a powerful Fire Blast. Counter it with Water or Rock.

Finally, question number 5 is definitely a joke question. The correct answer is all of them. Are you ready? 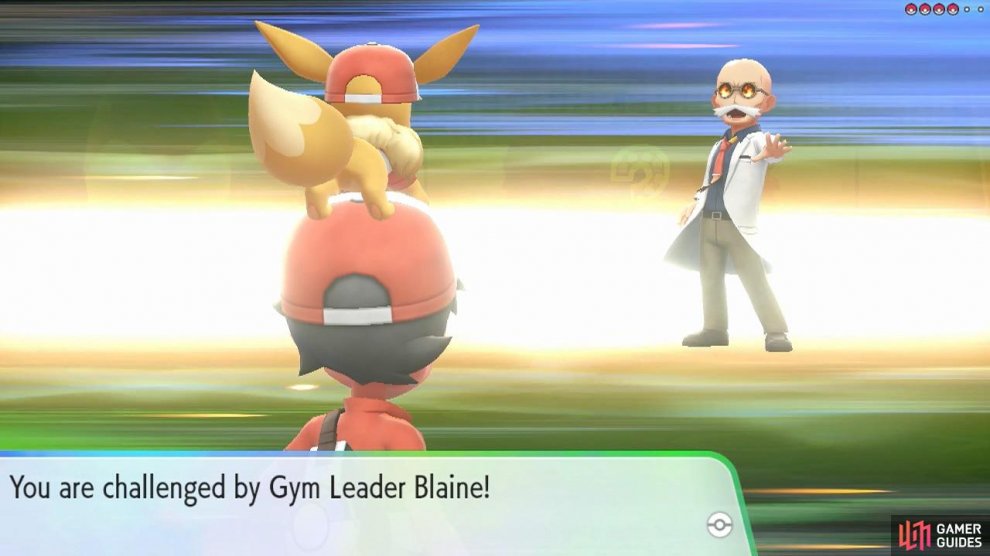 All of Blaine’s Pokémon are pure Fire-types, so it’s pretty easy to hit their weak spots. First up is Magmar, which can use STAB Flamethrower, Low Kick to hurt Rock-types, and Confuse Ray to distract your Pokémon. Water-types are ideal, while Ground-types are great too.

Next up can be Arcanine, an evolved Growlithe. Blaine’s Arcanine can use Flare Blitz for a powerful STAB assault, Outrage to hit most targets for heavy neutral damage, and Crunch to bite into Psychics and Ghosts. Water and Rock-types are strongly recommended.

Rapidash is an evolved Ponyta that’s true to its name. For attacks, it also has Flare Blitz for STAB, and Quick Attack to try and sneak in an attack before you can. Rock-types are the best, but Water isn’t too shabby either. If they’re fast, a Ground-type like Dugtrio can be good.

Finally, Ninetales is an evolved Vulpox. This one can use Fire Blast for a powerful STAB-boosted hit. It also has Quick Attack like Rapidash. Similarly, Rock and Water are solid choices, to weaken the damage from Fire Blast and counter with super-effective damage.

Douse Blaine’s fiery passion and he’ll give you his Volcano Badge, as well as TM46 Fire Blast. If you missed it, Fire Blast is one of the strongest Fire-type moves for special attackers. But it’s accuracy is somewhat on the low side. If it’s reliability you want, go with Flamethrower.

When you leave the Gym, your rival will catch up to you. He’ll mention that the final Gym is the one in Viridian City. Indeed, if you want to obtain the eight and final Gym badge, you’ll need to go over there.